You are at: Home / Politics 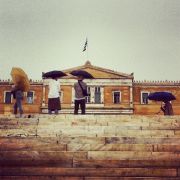 SYRIZA MP asks: Just how will we find the money?

Critics have levelled the accusation at SYRIZA many times but the party’s veteran MP, Manolis Glezos, has broken new ground by being the first leftist lawmaker to express doubts about just where SYRIZA is going to find the money to fulfil its policy pledges.

The leader of anti-bailout Independent Greeks, Panos Kammenos, has never been reluctant to express his opinion but when this view fails to meet with the approval of his own spokesman, it is clear that nothing about the party's future can be taken for granted.