You are at: Home / Agora / How economic sanctions on Russia could affect Greek economy

How economic sanctions on Russia could affect Greek economy

The imposition of financial sanctions on Russian individuals and corporate entities in response to the invasion of Ukraine has put economic links with Russia in the spotlight, as governments and companies assess the potential impact of ceasing trade with Russia.

As a member of the EU, Greece is mostly affected at present by the exclusion of a number of Russian banks from the SWIFT messaging system for interbank transfers, and by the banning of Russian aircraft from the bloc. In addition, the Greek government has suspended applications by Russian nationals to the Golden Visa investment-based residence scheme. The situation remains fluid, and it is possible that sanctions may be extended to more activities.

Here we make a rough attempt to estimate the size of Russia’s footprint on the Greek economy as a whole, with a view to pinpointing the areas at greatest risk from the sanctions. 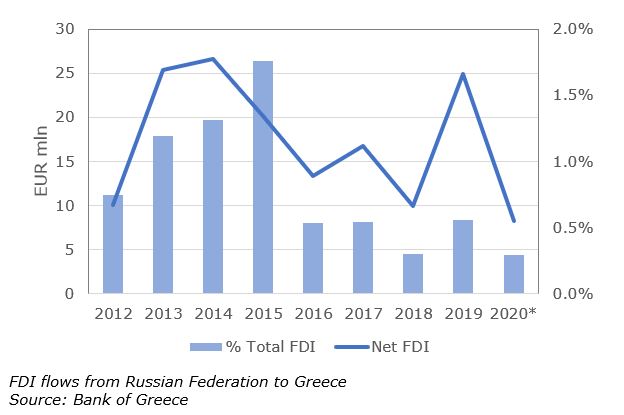 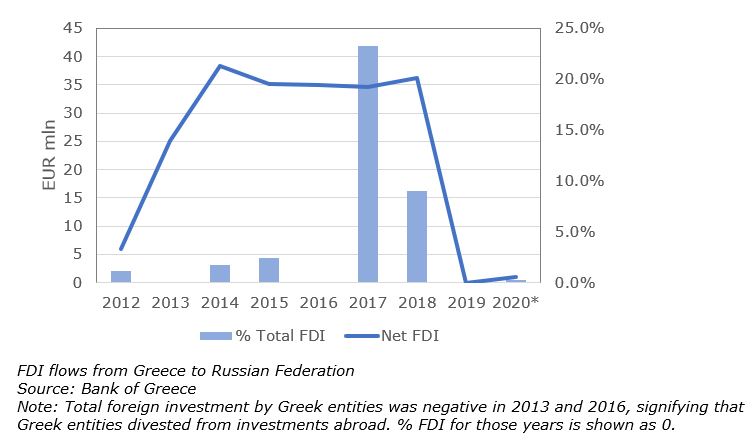 Russian FDI in Greece is not significant. Since 2012 Russian entities have invested 155 mln euros in total in Greece. In 2019, Russia was the 22nd largest source of foreign investment, accounting for just 0.6 pct of the total 4.5 bln euros.

Greek investment in Russia has been somewhat more significant, if only because Greek investments abroad have fallen precipitously in recent years. Since 2012, Greek entities have invested 211 mln euros in the Russian Federation, the bulk of it between the years 2014-2018. In 2018 Russia was the 6th largest recipient of Greek FDI, accounting for 9 pct of the total.

Greek entities invested in Russia even as they were divesting from other investments abroad, most notably in 2013 and 2016 when they made divestments from other former eastern bloc countries and Turkey. By 2019, however, Greek investments in Russia had fallen to almost nil.

The stock of Greek investments in Russia and Russian investments in Greece remains insignificant in relation to the total Greek economy, and is therefore unlikely to pose a macro risk to the economy

It should also be noted that Greek banks do not have any sizable exposure to either Russian Federation, with the exception of 20 million euros among Piraeus Bank’s 80 billion euros of assets.

Both imports from and exports to Russia have dropped precipitously since the imposition of sanctions over the annexation of Crimea in 2014, and exports were on the decline even prior to that.

Exports from Greece to Russia are a fraction of exports, and currently stand at below half the level of a decade ago. They currently account for around half a percent of Greece’s total foreign trade.

As of 2020, Russia remains in the top 5 sources of imports to Greece, despite a significant reduction in volumes. 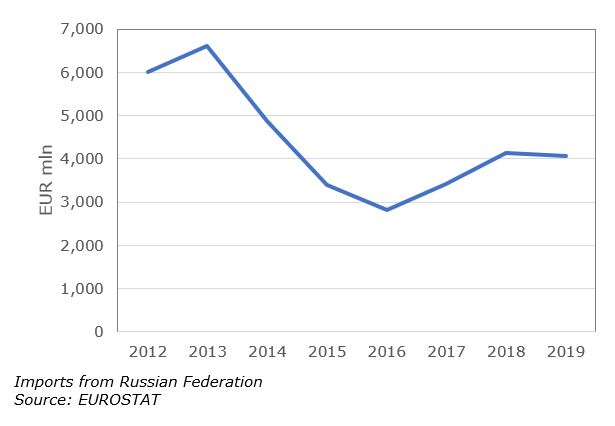 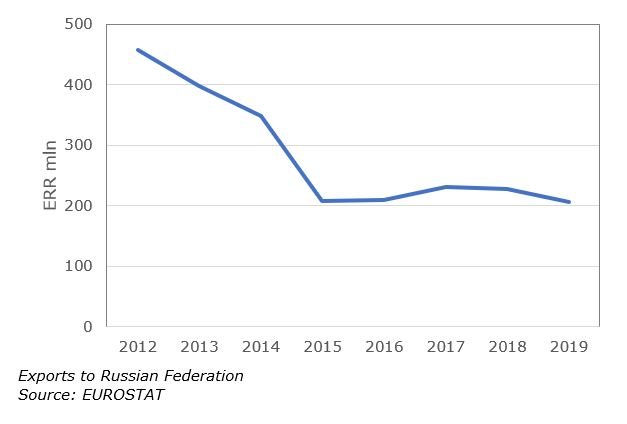 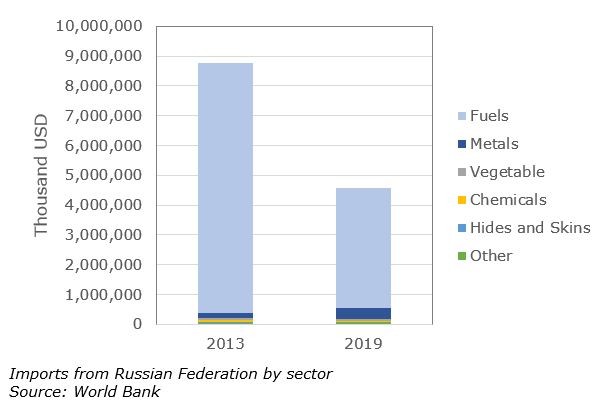 The vast bulk of imports from Russia relates to fuel – predominantly oil, but also natural gas. 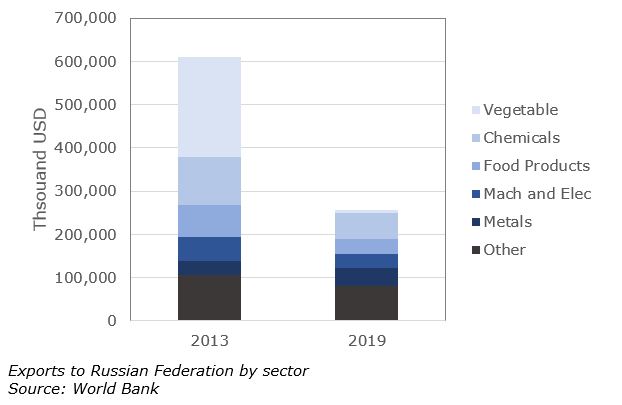 The main categories of exports to Russia historically were foodstuffs. Direct exports of fruit and vegetables, which once accounted for over a third of exports by value, have fallen by almost 97 pct since Russia responded to the Crimea sanctions by banning imports of fresh produce from EU countries. Other food product exports have more than halved. Chemicals, metals, machinery, and other manufactured products are now the largest remaining export sectors to Russia.

Greek exporters, particularly those in the north of Greece which have maintained strong ties to Russia, will undoubtedly be hurt by the exclusion of Russian banks from the SWIFT system, which will complicate payments. However, the impact on the overall economy will not be significant.

The biggest impact on the economy will be felt from high fuel prices. This applies regardless of whether Greece needs to substitute fuel imports from Russia or not, as global prices are already affected by the war in Ukraine and the perceived risk of supply interruptions from Russia.

According to reports in the press, the government is working on the assumption that each 10-euro rise in the price of natural gas will shave 600 mln euros off GDP. 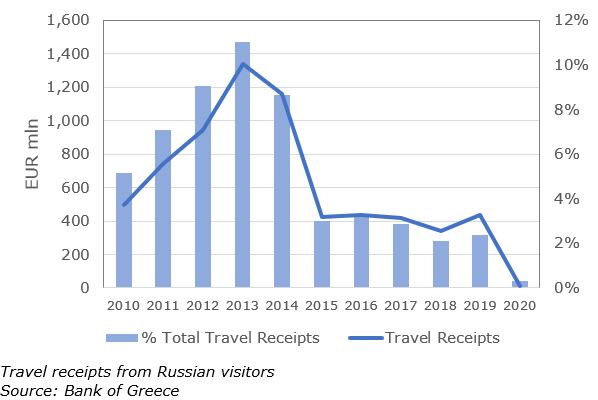 Greece received around 580,000 Russian visitors in 2019. This was just under half the arrivals received in 2013, prior to the annexation of Crimea. Since 2014, Russian government policies encouraging domestic holidays, and competition from Turkey, where inflation has driven down costs for foreign visitors, have drastically reduced the numbers of Russian visitors to Greece.

While the loss of Russian visitors will have some impact on the tourism industry, particularly in the north of Greece, the indirect impact of tensions in the wider region is likely to have a bigger chilling effect. The government is particularly concerned about cancellations from US visitors due to the perceived risks, and is currently bracing itself for a 5 pct reduction in travel receipts compared to 2019, valued at around a billion euros.

This may well prove to be an underestimate if the crisis is not defused before the summer and if high fuel prices persist. Based on tourism’s contribution to the GDP in pre-pandemic times, it estimated that a 10 pct drop in income from visitors translates into a 1 pct drop in GDP.

In addition to banking restrictions imposed by the EU, Greece’s Ministry of Migration and Asylum announced that it is freezing all applications by Russian nationals to Greece’s Golden Visa programme. The scheme provides residency permits, including Schengen zone travel rights, to third country nationals who invest more than 250,000 euros in property or invest in Greek financial products.

Russia has been the third largest country of origin for Golden Visa beneficiaries since the introduction of the scheme in 2014 – the largest by far being China. In total, 599 Russian nationals and their families have been granted investment-based residency as of January 2021 according to the Ministry of Migration, around 6 pct of the total.

The monetary value of Golden Visa investments is not disclosed, but is estimated to total somewhere in excess of 150 million euros. This is a tiny fraction of the 5.28 billion euros foreigners invested in property in Greece over the same period according to the Bank of Greece.

In addition to the potential macro effects of the economic sanctions on Russian entities, it is worth considering a handful of strategic investments by Russian nationals in Greece.

Perhaps the most prominent of these are the investments by Ivan Savvides and his companies in northern Greece. They include a 71.8 pct stake in the Thessaloniki Port Authority through the vehicle Belterra Investments. Thessaloniki is Greece’s second largest container port, and is currently the focus of a major investment programme to increase its capacity and upgrade transport links into central Europe. Savvidis also owns a number of landmark hotels, a top tier football team and a national TV channel. Savvidis holds Greek nationality in addition to Russian and is therefore unlikely to be directly affected by sanctions.

Perhaps more significantly, since 1991, Russian natural gas giant Gazprom has been part of a 50-50 joint venture in natural gas supplier Prometheus Gas SA in partnership with Copelouzos Group, a major player in the Greek energy and infrastructure sector. Other Russian entities are invested in Greek resort developments, including a 500-million-euro development in Crete and the redevelopment of Skorpios, the private island sold in 2013 by the Onassis family, which is projected at between 165 and 230 million euros.

Based on the figures presented here, Greece and the majority of Greek businesses have very limited direct exposure to Russia and are therefore unlikely to suffer significantly as a result of sanctions, with the exception of a small number of companies and economic sectors.

The greatest risk by at least an order of magnitude stems from the impact of hostilities in the Ukraine on oil and natural gas prices in the global markets. This, combined with generalised inflation and supply chain disruptions could have a significant dampening effect on economic growth. At the same time, the threat to tourism from a prolonged confrontation should not be underestimated.