You are at: Home / Agora / Greek pensions laid bare

The first alarm bells regarding its sustainability rang in early 1990 when it become obvious that the re-distributive nature of the Greek pension system – the contributions of those in employment paying for the pensions of those retired – would face serious headwinds as the ratio of employed per pensioner was steadily declining and the demographics were developing unfavourably for a rather generously designed scheme.

A comprehensive report on the Greek pension system in 1997 highlighted all the risks and gave a small window of opportunity up to 2005 to deal with the issue before the pension rights of older generations would come to maturity and put significant strain on the financing of the system and consequently the state budget.

No government since that report took the courageous step to deal with the issue head on and upset reluctant stakeholders and social partners. There were half-hearted patch ups involving minor, mostly parametric, interventions.

An attempt at reform in 2001 by the then PASOK government met serious social and political resistance and was quickly abandoned due to fears about the political cost and ambition for re-election. This left the Greek political system continuing to finance the system through deficit financing and, while society remained oblivious or refused to face the uncomfortable truths.

Absence of genuine intention to reform created a skewed pension system which was heavily reliant on state grants. According  to Eurostat data (courtesy of Emmanuel Schizas's recent blog post), in 2009 when employer contributions were just over 11 billion euros and 11.7 billion euros came from contributions of employees and the self-employed, the state was by far the biggest donor in the system, paying in 17.8 billion euros.

When the Greek state found itself effectively bankrupt in 2010, the system was almost in a state of decay, not knowing exactly how many pensions were actually paid. It was a natural consequence that pensioners became prime candidates to feel the effects of the painful belt-tightening that would ensue.

Since the start of the crisis Greek pensions have been a fertile field for populism and misleading reporting. In this heated and highly emotionally charged debate on the topic, we attempt to present some figures that highlight what has been done so far on the fiscal front and what is the current state of play.

The state budget covers public sector pensions (main and supplementary) as well as providing grants to the social security funds (SSFs) to also cover the payment of private sector pensions.

In 2014, the state pension bill reached 6.09 billion euros and state grants to SSFs stood at 11.1 billion. The combined total corresponded to 9.6 percent of GDP.

Despite a sharp drop of 21 percent (4.5 billion) in the total figure since 2011, the respective figure relative to GDP has fallen by just 1 percentage point. This reflects the fact that GDP contracted by around 14 percent over this period.

The biggest annual drop was recorded in 2013 when the full impact of the last pension cut and abolition of bonuses (Christmas, Easter and holidays) voted in 2012 became effective.

The grants to SSFs serve a varied role. Aside from plugging funding holes in various pension funds, in 2014 the state covered health-related expenses of 656 million euros for the main healthcare provider (EOPYY), a figure which is almost half the 1.1 billion that was spent in 2013.

The Complementary Pension Allowance (EKAS), which serves more as a benefit for low-income pensioners rather than retirement pay, reached 721 million euros last year from just under 800 million in 2013.

The lion’s share of actual pension-related grants goes to the farmers’ insurance fund (OGA) and the wage earners’ fund (IKA) with each receiving grants of around 2.9 billion euros in 2014. They are followed by the fund for the self-employed (OAEE), which although reduced from the 1.4 billion of 2013 still required 1.1 billion last year.

The state’s contribution to the two funds associated with the Hellenic telecommunications (OTE) and public power company (DEH) is close to 1.2 billion euros.

Pure pension-related grants, excluding EKAS, from the budget were under 9 billion, or 5 percent of GDP, in 2014

The state’s total contribution to the social security sector in 2014 reached 14.4 billion euros, almost 8 percent of GDP, from just under 16 billion in 2013 and served a varied role. It includes the national health system by covering the operational deficits of hospitals with almost 1.5 billion euros, 1.8 billion euros was spent on social protection, including the 500 million “social dividend” distributed by the previous coalition government led by Antonis Samaras.

Two years ago, Samaras’s government submitted a document in Parliament showing the evolution in the number of public sector pensioners and the related pension cost since 2005. The data indicated that in the 4-year period until 2009, although the number of pensioners rose by 10.5 percent, the public sector pension cost climbed by 56.7 percent, to 6.58 billion in 2009.

Since then, although the nominal pensions were slashed, the total cost remained virtually unchanged in 2012 as the number of pensioners increased by 8.7 percent over this period.

The latest official figures provided by the social security system’s online service (IDIKA) for March 2015 indicate that 2.9 million main pensions were paid with a monthly cost of 2.07 billion euros, implying that the average main pension is 713 euros. The figures show that almost 76 percent of main pensions stand below the 1,000-euro mark.

Overall, for the total of 2.65 million pensioners in Greece the average monthly income from pensions amounts to 884 euros.

Note, though, that for around 45 percent of pensioners their monthly pension income stands below the 2013 poverty limit of 665 euros. 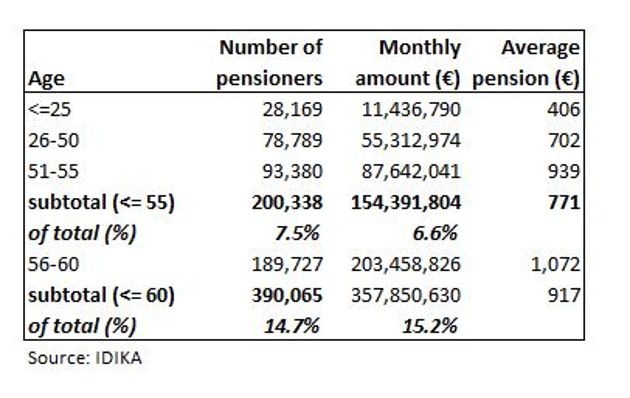 In its latest proposal, the Greek government suggests gradually limiting early retirement so nobody can claim a pension before they reach 62. This adjustment would be phased in from the beginning of 2016 until 2025.

The government’s document outlines that the average retirement age in the public sector currently stands at 56.3 years and will gradually increase to 60.7 in 2022 and further to 64.4 years in 2025.

This suggests a more rapid adjustment is scheduled for the public sector where the current average retirement age is four years below that of the private sector and reflects the lower retirement age for armed forces as well as the early retirement of female public servants when they are over 50 years old and have a child below 18.

The assets of pension funds have been a bone of contention during the crisis. Due to legal restrictions, the funds had invested large parts of their assets in Greek government bonds, even in the run up to the Private Sector Involvement (PSI) in March 2012 and took a major hit when the debt swap took place. According to data from the Finance Ministry, pension funds lost approximately 12 billion euros as a result of the PSI.

At the end of 2014, pension funds’ total assets amounted to 16.3 billion euros, with almost one-third in common capital, while the wealth of the Generational Solidarity Insurance Fund (AKAGE) stands at 3.7 billion, corresponding to almost 23 percent of the total.

Given the amounts required to keep the Greek pension system functioning in its current form, It is evident that even factoring in the PSI losses, Greek pension funds assets do not have the capacity to support the retirement pay under any type of asset management.

Greece’s pension system still has room for improvement and reform. It is crucial that there is a clear distinction in its functions between social security and welfare. It needs to ensure there are adequate financial resources to support the health system as an extra safety net. It can redirect financing to true welfare and social protection functions which are not linked to pensions and can at the same time secure a respectable minimum level of living.

Most critically, the overall mentality regarding Greek pensions needs to be redirected from the re-distributive to the capitalised, in which the individual will take ownership of his/her own retirement planning. This would put an end to people having false expectations from the state, while securing a respectable level of income for people in their old age.

From what we understand, in these five months of negotiations there has been resistance to a comprehensive overhaul of the system on one side and a fixation on fiscal targets on the other. Neither side is doing justice to the idea of pension reform.