You are at: Home / Agora / Reflections on Greece's balance of payments

Reflections on Greece's balance of payments

The current account. We can think of GDP as income (Y) from the production and supply of goods and services: production determines “income.” On the demand side, we can distinguish four categories: consumption (C), investment (I), exports (X), and imports (M). Thus, when demand is equal to supply: Y = C + I + X - M.

X - M describes the exports to abroad of what Greece produces in goods and services (including tourism), minus the imports from abroad of goods and services that Greece uses domestically (including energy such as crude oil and natural gas). The balance X - M is called the “foreign balance.” This is the national accounts counterpart of the “current account” in the balance of payments.[1]

We can also say that Y - C = S: income minus consumption equals “savings” in the economy. Thus, we can now write that S = I + X - M, or: S - I = X - M. The saving-investment balance equals the foreign balance. In balance of payment speak: the saving-investment balance equals the external current account. If Greece saves more than it invests (S-I>0), then there are resources left over for net exports (X-M>0). How does such a development emerge in reality? Well, either production (Q) speeds up (the supply of goods and services expands, generating more income (Y)); or consumption and/or investment slow down (demand slows).

Figure 1 below shows the current account of the balance of payments (BOP) in percent of GDP for Greece and the combined other 18 member countries of the euro area. We have taken the euro area as a whole because that avoids bringing in a further complicating element, which is that relations between countries in the BOP can be influenced by exchange rate movements. Since all 19 euro area countries use the same currency, there is no exchange rate factor that distinguishes one member from another. All face the same exchange rate. 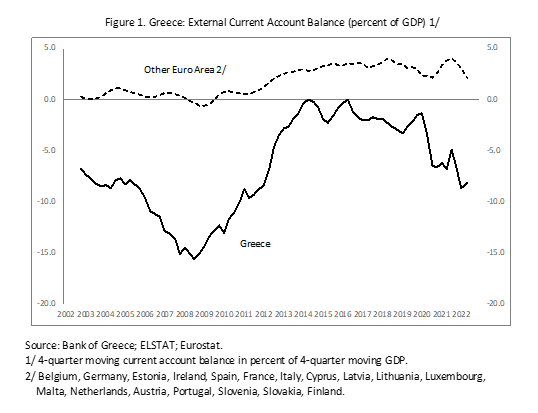 Figure one highlights a striking feature: Greece has never had a current account surplus! Spending always exceeds income. The deficit has varied from nearly 16 percent of GDP in 2008 to touching balance (0) in 2014 and 2016. The current account has since moved to a deficit of 8.5 percent of GDP, again (data through 2022-Q2).

The other countries of the euro area have saved some of their income. Before the Great Recession in 2009-2010, their current account hovered around balance; thereafter, it has been in surplus, recently around 2.5 percent of GDP.

To a trained eye, the current account graph of a country is like an electrocardiogram of a person. For Greece, in the early 2000s, the mood of the people was buoyant after entry into the euro area brought cheap financing from abroad, Greece won the European Football Tournament, and organized the Summer Olympics in Athens, both in 2004. Greece spent more than it earned. Income minus consumption was negative; savings collapsed and the current account took a deep dive, financed with foreign debt. This ended in 2009 when the funding stopped with the onset of the Great Recession.

Then, between 2009 and 2014, Greece experienced the painful effects of adjustment. What many branded with the dreaded word “austerity,” was in reality an inevitable “Act of Nature” when you literally run out of money. The Troika of the euro area partner countries, the ECB, and the IMF helped Greece with unprecedented funding to pass through the wringer of recovering the country’s saving-investment balance.

As the funding for very large current account deficits suddenly dried up in late 2008, Greece had no choice but to cut back spending. This caused the sense of “austerity.” The country felt as though it was “adjusting through poverty.” Could this have been avoided and could the strengthening of the current account have been achieved in a different way to avoid the stresses and controversies of austerity?

Structural reform is difficult and contentious in any country; improving competitiveness takes time. Thus, given the evaporation of funding for external deficits, that reforms take time, and, importantly, the tremendous hole that the current account was in (-16 percent of GDP!), Greece had no choice but to cut spending. There was no escaping the mathematics of this problem. Mathematics represents Nature, and no-one can mess with Nature, not even the Troika.

After the dust settled in 2014-2016, Greece has once again gradually crept back into a current account hole of 8 percent of GDP. This is the result of policy. If a sudden financing stop were to recur, would Greece feel any different from the last episode of adjusting its external deficit? 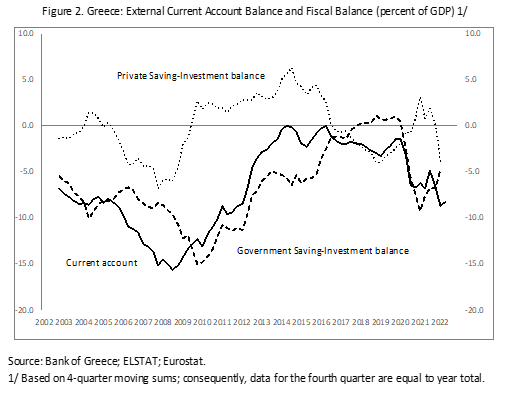 Fiscal policy in Greece has a sustained tendency to generate deficits over time (except in 2018-2019). Income is cut by granting tax cuts. Consumption is increased by hiring many people in the public sector and expanding the purchases of goods and services. Relative to the ability of Greece to generate income (related to structural reforms and competitiveness), the public sector constantly overspends. This fiscal deficit then becomes a current account deficit. Greece has nearly a perfect mapping from fiscal policy to the balance of payments: the twin deficits which also triggered the crisis in 2009.

During the Greek crisis years, the fiscal balance in cyclically-adjusted terms, was reduced by an estimated 16 percent of GDP (equal to the elimination of the current account deficit, as noted above). This is mirrored in the saving-investment balance of the government in Figure 2.

There are three financing components in the balance of payments: a drawdown of official reserves; receiving foreign direct investment; placing sovereign bonds and loans (foreign debt). The annual flows of these components accumulate stocks of assets and liabilities abroad. The overall position with the rest of the world is the “net international investment position” or NII.

It is not easy to keep track of the transactions with abroad, but Eurostat receives data from member countries’ central banks. In 2008-Q1, the “restricted” Greek NII position[2] was a deficit of €-160 billion, or -68 percent of GDP. By 2022-Q2, this had grown to €-263 billion, or -133 percent of GDP. Because of continuous external deficits, Greece doubled its net liabilities, in percent of GDP, to the rest of the world.

Alternatively, we can infer an “unrestricted” estimate of the Greek NII position by adding up three subcategories reported separately by Eurostat:[3] the net foreign direct investment position, the net portfolio position, and the net “other” position.

These three components add up to an “unrestricted” net liability of €-323 billion in 2022-Q2, or -164 percent of GDP (larger than the “restricted” definition of the NII used by Eurostat). For comparison, some euro area countries have positive NII positions (including Germany, Netherlands, Finland, and Belgium), which means that they own more assets abroad than they owe to abroad (associated with current account surpluses).

Lastly, Greece has moved from a small deficit in the net portfolio position to a surplus, and from a small deficit to a large deficit in the “other” position. This has a clear explanation: the Greek foreign debt was issued until around 2010 mainly in the form of bonds. Then, as Greece was cut off from the bond markets, partner countries and multilaterals funded Greece with rescue loans, which were used by Greece to amortize bonds. The large debt restructuring in 2011-2012 also cut the amount of bonded debt outstanding with abroad (public and private creditors).

·         Once again, Greece is building up vulnerabilities to a sudden stop of foreign funding

·         Relative to income generated in the Greek economy, fiscal deficits are excessive

[1] The foreign balance and the current account are not exactly the same, because the latter also records certain income flows and grants that are not in the foreign balance, but we need not worry about that difference for this blog.

[2] Eurostat measures its version of the NII as excluding “non-defaultable instruments.”

[3] This measure should, in principle, include the “non-defaultable instruments.”