You are at: Home / Agora / Why Greece’s ‘also ran’ parties are crucial

But under the Greek electoral system, determining whether the biggest party achieves an overall majority just doesn’t depend on its share of the vote, as important as that may be. One of the quirks of the system is that a host of other parties also play a major role in whether the main party gets to rule alone or not.

The political equivalent of the “also rans” in horseracing, these are the parties that fail to clear the three percent hurdle to enter parliament. The aggregate of the “also rans” is always important because if the percentage gained by these small parties totals 5 percent, for example, the winning party would need 38.4 percent to take 151 seats. If the total support for parties not entering Parliament reaches 10 percent, the threshold for the victorious party falls to 36.4.

The other words: the higher the share of the “also rans”, the easier it is for the poll-topping party to form a single-party government and avoid a coalition. 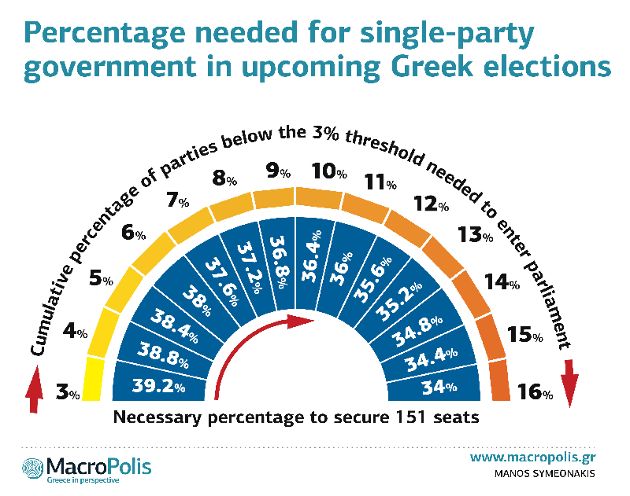 While some of these parties are familiar, like the far-right LAOS party that was in parliament until 2012, most are so obscure that only hardened political anoraks will have never heard of them, like numerous groups sporting the word “communist” in their title or the fantastically named perennial contestant run by a farmer in northern Greece called “Independent Innovative Left, Renewed Right, Renewed PASOK, Renewed New Democracy, No to War, Party of Business ‘I Give Away Land, I Give Away Debts, I Save Lives,’ Panagriarian Workers Movement of Greece”.

As previous results show, these parties are neither are they small in number, nor are the percentages they receive anything to be scoffed at.

In the first of the elections in 2012, for example, a record 25 “also rans” won a staggering 1.2 million votes, or some 19 percent of the total. Taken together, that made them more successful than New Democracy, which took 1.19 million votes (18.85 percent).

In the second election in June, the 15 of them who could afford to run again took 368,277 votes, or almost 6 percent. That was more than the communist KKE received and just less than Democratic Left, which won 17 seats. 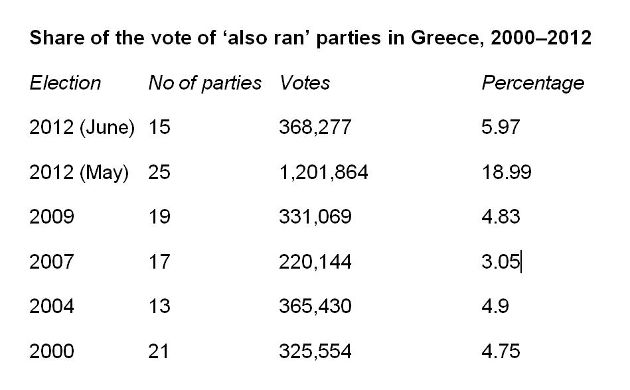 This time round, a total of 22 parties (including four coalitions) are running in the election. Assuming that seven of them will make it into parliament (Syriza, New Democracy, Potami, KKE, Pasok, Independent Greeks and Golden Dawn), recent opinion polls suggest that the “also rans” could take anything from 5 to 8 percent. Or even more.

Pushing up the figure will be the share of the vote taken by former prime minister George Papandreou’s Movement of Democratic Socialists, leftwing antiausterity ANTARSYA, nationalist LAOS, and Democratic Left, all of which are not expected to make it into parliament.

If the “also rans” do take between 5–8 percent, then Syriza – if Alexis Tsipras’ party emerges as the winner of Sunday’s election – would need 37.2–38.4 percent to go it alone.