You are at: Home / Agora / Greece's 2009 deficit makes for a good conspiracy; shame about the numbers

The matter has recently resurfaced and Georgiou could face a new trial following an appeal by a prosecutor that the ex-statistics chief was only tried for breach of duty, and not for falsifying data. Greece’s highest court accepted the prosecutor’s appeal and Georgiou, who no longer heads ELSTAT after he resigned from his post a year ago, should appear before the Athens Appeals Court.

Nobody should be surprised that the saga of the 2009 deficit has not gone away as Greece’s political system, in its chronic incapacity to have an honest and constructive debate, never addressed the litany of oversights and the extent of mismanagement that led to the country’s bankruptcy in 2009.

Instead political careers were built and Greeks were fed half-truths and conspiracy theories that blamed the entire world for the country’s calamity, which conveniently diverted any attention from the huge responsibility that lies with the domestic political parties and leadership that drove the country into the wall.

The remedies that Greece was prescribed from 2010 onwards are universally recognised as devastating but the problems that invited those remedies are entirely homegrown.

There is not really anything convincing that can be added to the claims that Greece went bust because its 2009 fiscal figures had been inflated by dark forces that wanted to put the country on the troika’s operating table.

It is beyond dispute that the government led by conservative Prime Minister Kostas Karamanlis lost control of all fiscal order very early in 2009 and, taking advantage of the fact that the European Commission was looking the other way, attempted to cover up the extent of the fiscal derailment. Even a week before he left office, Karamanlis’s government claimed that the deficit would be half its actual size at the time.

Equally, there is no shred of doubt concerning Greece’s fiscal laxity during the euro years, which climaxed in the 2008-2009 period when all the weaknesses were exposed after the global financial crisis found the country totally unprepared to weather the storm due to its unsustainable fiscal position.

Even though the facts are in plain sight a good conspiracy theorist will not let them get in the way of the narrative. However, there is one particular point that the political opportunists and demagogues that circulate those theories fail to answer, even if we accept that Greece did fall victim of a dark plot, how would it finance itself back in 2010 and avoid the troika?

The reality is summarised in one chart that often helps dispel myths and concentrate minds. 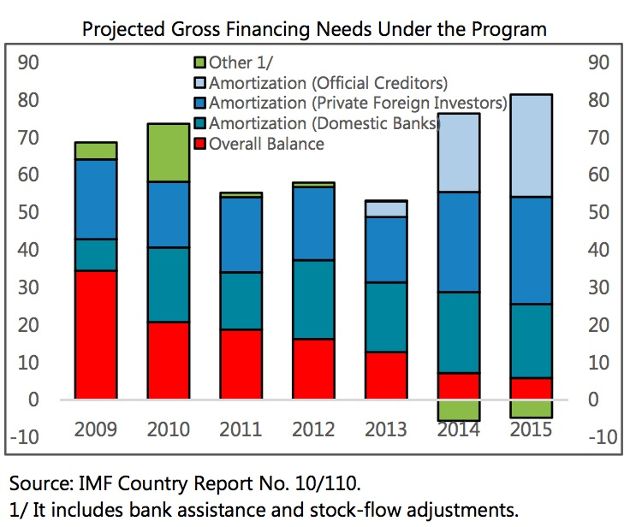 At the end of 2009, Greece was facing annual financing needs in excess of 50 billion euros, to cover its fiscal deficit by issuing new debt and rolling over existing debt that was maturing. This would entail Greece continuing to have the vote of confidence of the investment community, which would have to be willing to maintain its exposure to the country.

That vote of confidence would need to be to the tune of 170 billion euros between 2010 and 2012. This is how much money Greece needed to borrow to keep itself solvent. For the 2010-2015 period (even if we assume Greece had put its house in order and had brought the deficit down to single digit figures) the financing needs rise to the staggering figure of 325 billion euros, 1.3 times the size of its economy.

In 2010 alone 60 billions were needed (about a quarter of GDP) even factoring in the brutal austerity that was implemented that year that pushed the deficit down to 20 billion euros.

That volume of financing was simply not available just as it became apparent that throughout 2009 the numbers that were reported were effectively a sham and all trust was lost.

Wild claims of financing being available in Russia, China or some other unusual source were dispelled last year when the SYRIZA-led government’s attempt to find backers fell flat as quickly as its pre-election pledges.

Greece needs to face reality if anything good is to come out of the devastation that the last seven years have caused to the lives and prospects of millions of Greeks. The current crop of Greek politicians has not missed a single opportunity to affirm how inadequate it is to lead this effort.