You are at: Home / Agora / Don't celebrate a French reconnection for EU just yet

He collected almost 24 percent of the vote and beat far-right candidate Marine Le Pen into second place. Le Pen garnered nearly 21.5 percent in what was seen as a disappointing result for her Front National (FN) party.

In the wake of the defeat for the far-right in last month’s Dutch elections, Sunday’s result was seen by some as a sign that the populist wave many feared would hit Europe has expended all its energy before reaching the EU’s shores.

European Commission President Jean-Claude Juncker even took the unusual step of congratulating Macron despite there being a run-off against Le Pen yet to come – albeit one that he is expected to win comfortably.

Although Juncker’s gesture is understandable given the mud that Le Pen has slung at the EU and the Commission, its prematurity is symptomatic of Europe’s tendency to laud the eye-catching victories but brush off the smaller defeats even though the latter have a corrosive effect on the European project.

More than 7.5 million French people voted for Le Pen (the highest amount for an FN leader) and her brand of pernicious neo-nationalism in Sunday’s first ballot. No matter how wide the margin of her expected defeat in the second round, this is not a level of support to be dismissed, especially given her dominance in the east of France during the first round.

Le Pen may be destined for defeat now but she has a sizable base to work with and time on her side if the issues she mainly campaigns on, such as immigration, the influence of Islam and the role of the EU, continue to be dominant themes in French politics over the coming years.

In an article published in the New York Times a few days before the election, Algerian author Kamel Daoud pointed out that the idea Le Pen would not become French president has become “a kind of political verse, a comfortable mental habit.”

“But it masks a peculiar form of denial no one wants to recognize as a potentially terrible mistake,” he wrote. “And it leads to this contradiction: Even as the mainstream discusses the need to mobilize against a Le Pen presidency — with a “vote utile,” or tactical vote — it dismisses the very possibility that she might win.”

Daoud argues that the analysis from the “mainstream elites” of the rise of populism is “out of sync” and masks the possibility of Le Pen, or someone like her, winning an election.

“The prospect of a Le Pen presidency upsets a kind of political positivism: the view that democracy can go only from good to better, from being a necessity to being a right,” he wrote. “Ms. Le Pen’s election would run counter to the course of history, the reasoning goes, and therefore it cannot be. This is a happy ending for elites: a narrative convention, a marketable concept, a variant form of utopia — and the basis of an irrational political analysis.”

It is also worth noting that the French vote was almost evenly split between pro-EU candidates one side and eurosceptic or anti-EU hopefuls on the other. As a reminder, in the dual Greek elections of 2012, there was much backslapping over the fact that a pro-bailout coalition led by centre-right New Democracy beat off the anti-austerity insurgency from SYRIZA. It ignored that roughly half of Greek voters had backed parties that flirted with, or were dead set on, Greece leaving the euro.

This created a pool of voters from which SYRIZA could gradually draw greater support, bringing it to power in January 2015. The refusal of left-wing candidate Jean-Luc Melenchon to endorse Macron underlines that there is a potential fluidity to the situation in France. While left-wing voters are unlikely to back Le Pen, they can have an impact on the final outcome by staying away from the elections. No two situations are the same but Greece’s case is a reminder that in politics it is the next elections that are the ones of greatest concern.

The other significant element of Sunday’s vote in France is the crumbling of the two powerhouses of the country’s politics on the centre-right and centre-left, especially the Socialists (PS), whose candidate Benoit Hamon gained just 6.4 percent of the vote. This AFP graphic shows how far PS tumbled. 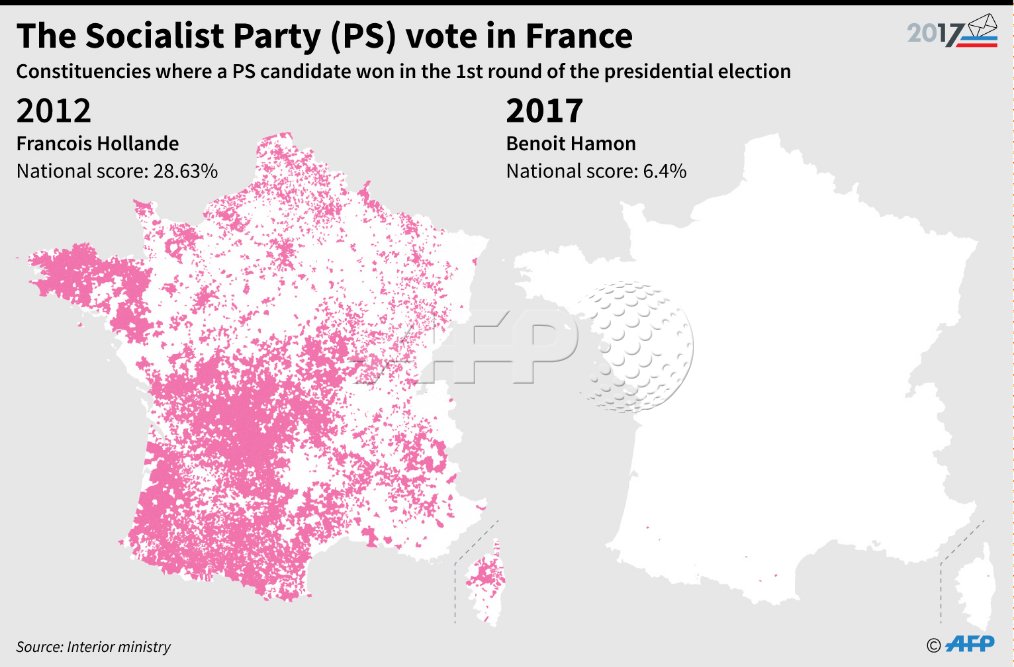 The collapse of the centre and the traditional parties is a concept Greece is also familiar with. After all, the term “Pasokification” to describe how a once-mighty party can be swiftly decimated is now widely used and was applied to Sunday’s results for PS.

The power sucked away from parties like PS, PASOK, Labour in the UK and PSOE in Spain causes fragmentation that makes governing much more challenging (Portugal’s so-called “contraption” coalition of Socialists, radical left and Communists is an exception at the moment). The Netherlands, for instance, is used to having a plethora of parties in Parliament but power has become much more diffuse. In 2003, the three leading parties shared 74 percent of the vote but in the national elections last month, this fell to around 45 percent.

This centrifugal trend also creates space for newcomers, who carry with them uncertainty about the way they may shape the political agenda and views of voters. In such an environment, it is unwise to take too much for granted.

The success of extremist parties, which seek to tap in to the frustration with the traditional groupings and take advantage of the social democrats frayed ties to the working class, is not necessarily in gaining power but in influencing the political debate. UKIP in Britain is a prime example of this given that it played a significant role in pushing the Conservative Party to the right and convincing David Cameron that he had to hold a referendum on EU membership. UKIP, which also profited from Labour’s demise in working class areas, was a catalyst in Brexit without winning a single seat at a general election.

Geert Wilders and his Freedom Party have managed something similar, although less emphatic, in the Netherlands. Many Europeans celebrated the fact that he came second in the recent Dutch election but this misses the point that extremists do not necessarily want to be in power when they can influence things from the outside. Who wants the responsibility of governing when you can push a populist message from the sidelines and force mainstream politicians into awkward policy contortions that suit your agenda?

For instance, would the victor of the Dutch elections, Mark Rutte and his VVD party, have ever made a statement about a “silent majority” in his country not tolerating migrants who “abuse our freedom” or would he have taken such a tough stance against Turkish politicians campaigning about their country’s referendum in the Netherlands if he did not have Wilders breathing down his neck?

“The highly divisive election campaign, in which virtually all parties defined themselves vis-à-vis Geert Wilders, has only widened the gap between the future coalition parties,” wrote Cas Mudde, an associate professor in the School of Public and International Affairs at the University of Georgia and expert on populism in the New York Times last month.

“The Christian Democrats moved sharply to the right, adopting slightly softer versions of Mr. Wilders’s positions, including Euroskepticism and thinly-veiled Islamophobia,” he added.

“Other mainstream parties in Europe should watch carefully and learn a lesson from the Netherlands. Fighting the right-wing populists on their terms may guarantee an immediate electoral victory. But ultimately the government that finally emerges from that fight will have its coherence and stability undermined,” concluded Mudde.

In these circumstances, it was no surprise that the members of Germany’s anti-immigrant AfD, which is hoping to make an impact in September’s federal elections, rejected last weekend a proposal by the party’s co-leader Frauke Party to banish extremist views from the grouping.

Maybe it was a slip by Rutte amid the euphoria of overcoming his far-right opponent but when he said after the elections that Wilders represented the “wrong sort of populism,” the Dutch leader essentially admitted that he sees the “right sort of populism” as the best response to the threat from the political extremes.

Perhaps we should take closer note of such statements and their implications before declaring that we have passed “peak populism” in the EU. It would be foolish to believe that populism only comes in far-left or far-right packaging. It has many guises and can be much more insidious than we care to admit. If mainstream politicians - Christian Democrats, Social Democrats, Socialists, conservatives and liberals – focus only on defining themselves against the extremes, where will the progressive policies and radical reforms come from?

Sadly, the European Union has a tendency towards to hubris. It likes to believe that its critics are just ill-intentioned nationalists with protectionist tendencies when they also include those who believe in the European project and are genuinely concerned about the failings and inequalities they see. It is much easier to contrast yourself with charlatans like Nigel Farage or Beppe Grillo than to admit that something might be wrong.

It is true that the EU has taken a buffeting in recent years, particularly from the euro and refugee crises, but is still standing and, in some respect, flourishing. Growth, for instance, is at its highest level in six years, while unemployment has fallen to the lowest point in nine years.

This is encouraging but it should not make us blind to so many matters of concern. Italy, for instance, remains politically and economically shaky, unemployment levels in southern Europe are disgracefully high and likely to remain this way for some time, in Germany, which was one of the few countries to step up during the refugee crisis, there were almost 10 attacks a day on migrants, in Hungary refugees are subject to hardline measures under the country’s authoritarian Prime Minister Viktor Orban, who feels he has the tacit approval of his EU counterparts, emboldening him even more. Then there is Brexit, which has taken the EU into uncharted territory – Will it act as a deterrent to the idea of other countries leaving the EU or will it break the spell binding the member states?

These are just some of the immediate challenges facing the EU, which do not even touch on the broader themes of the bloc’s relationship with the US and Russia, its defence policy and its ability to compete economically with Asia over the longer-term.

“Mainstream politicians might be able to buy themselves time in these upcoming elections, not least because Europeans seem currently hesitant about voting anti-establishment parties into office and risk adding to the geo-political and economic uncertainties prompted by the new US administration and the UK decision to leave the Union,” wrote analysts at the European Policy Centre (EPC) in a discussion paper published before the Dutch elections. “However, without foresight and a persuasive narrative on why European integration continues to be a 'win-win' exercise for the member states and their citizens, mainstream politicians are also recklessly flirting with potential disaster looming in the future.”

Maybe the surprise ascendancy of Macron, once ridiculed as a “champagne bubble” by critics in France, will prove a turning point for European politics and the EU as a whole. The evidence suggests, though, that we should not be popping the corks just yet.