You are at: Home / Agora / Debt relief or debt restructuring for Greece?

The two economic adjustment programmes for Greece from 2010 and 2012 as well as the sovereign debt restructuring from April 2012 and the debt buyback initiative in December of the same year have had a significant impact on the debt profile of Greece as a sovereign debtor. Greece’s creditor structure in 2013 compared to the point of departure in 2010 hardly bears any resemblance.

Prior to the conclusion of the first economic adjustment programme more than 85 percent of Greece’s sovereign debt was held by private institutions. By contrast, following the twin debt restructuring and buyback exercise during 2012 over 80 percent of Greece’s sovereign debt now rests in the portfolio’s and budgets of the eurozone’s member states, the ECB’s and the IMF’s vaults as well as on the balance sheet of the European Stability Mechanism (ESM).

Turning the profile of Greece’s creditors entirely on its head has major implications for the political economy of the country’s debt overhang. This “drastic case of “credit migration” from the private into official hands” (Zettelmeyer et al. 2013, p. 35) is without precedent in the history of a sovereign debt restructuring exercise.[1]

Put otherwise, while in 2010 Greek sovereign debt was primarily held by German[2], French, Italian, Swiss and Japanese banks, the combination of two rescue programmes and debt restructuring have fundamentally altered the ownership structure of and accountability for the accumulated sovereign debt of Greece from the private to the official sector. Greece’s public creditors in Europe and Washington together now own roughly 84 percent of the country’s 320 billion euros in debt.

But what are the policy implications today of the aforementioned debt migration? The momentum from the private to the official sector has now firmly put on the agenda the follow-up issue of restructuring migration, i.e. from private sector involvement to official sector participation in debt restructuring. Given Greece’s current sovereign debt dynamics (see graph 1 below) it is a matter of time until this secondary migration process becomes a top priority on the political agenda of policy makers in Washington, Brussels and Frankfurt.

Against the background of this structural transition in Greece’s sovereign debt profile one has to interpret the emerging discussions about the eventuality of a third adjustment programme and/or further debt restructuring. The first two adjustment programmes for Greece from 2010 and 2012 have a combined volume of 240 billion euro. The current programme expires in mid-2014.

The negative comments from government representatives in Berlin arguing against a further (third) sovereign debt restructuring of Greece must primarily be viewed in the context of the recent federal elections in Germany. They were articulated by Chancellor Angela Merkel and her Finance Minister Wolfgang Schaeuble for the purpose of domestic political consumption. But that does not make the issue go away. The restructuring migration argument formulated in this article sheds light on a number of complex questions searching for clear-[er] answers:

In the material assessment of the subject matter almost all sovereign debt experts and newly-established analysts of Greece are of the same opinion: The sustainability of Greece’s sovereign debt, which is rising again in 2013 in terms of debt-to-GDP ratios, is neither established today, nor guaranteed in the medium- to long-term.

It took no less than European Commissioner for Employment Laszlo Andor of Hungary to get to the heart of the matter. While he argued that Greece did not need a third bailout, Andor was honest to say that what Athens really needed was to be given debt relief.

“What Greece needs today is not a third bailout, but a proper reconstruction plan, which inevitably starts with a significant (emphasis added) debt relief and continues with programmes that bring fresh investments” (Kathimerini 2013).

Commissioner Andor’s debt relief assessment for Greece constitutes a substantial departure from the publicly articulated positions in Brussels and Frankfurt. Its merit is backed up by the current dynamics of Greece’s sovereign debt development with an economy continuing to shrink in its fifth year of recession. As graph 1 below illustrates, Greece’s debt-to-GDP ratio in 2013 is forecast to surpass 170 percent.

In absolute terms, according to the IMF and the Bank of Greece such a ratio corresponds to a total projected debt volume of 322 billion euro end-2013. The debt burden as a percentage of annual output in 2013 would surpass by more than 20 percent where Greece’s debt-to-GDP ratio stood in 2010, i.e. before the first economic adjustment programme and prior to the two debt restructuring exercises that took place in 2012. 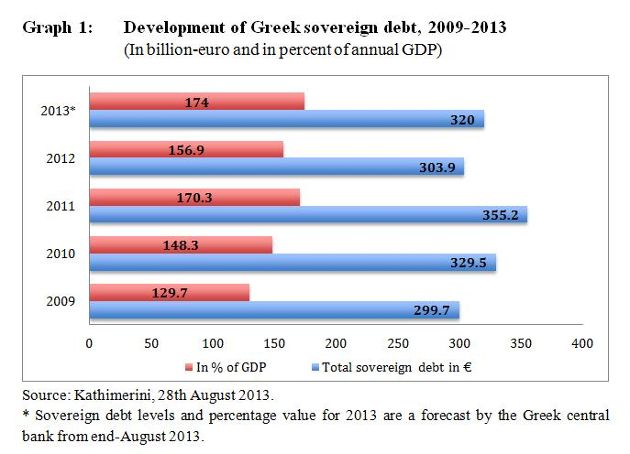 With a debt-to-GDP ratio that is above 170 percent Greece would again reach the level of 2011, i.e. prior to the combined sovereign debt restructuring and buyback of 2012. In absolute terms both measures reduced the country’s sovereign debt load by 64 billion euros. This corresponds to a ratio of roughly 65 percent of Greek GDP.

This overall volume and ratio are unprecedented in the history of sovereign debt restructuring. Without both the debt restructuring and buyback operations from 2012 – totalling 126 billion euros or 65 percent of GDP - Greece’s total would today reach approximately 380 billion euro and correspond to a debt-to-GDP ratio of 208 percent!

As a distressed sovereign, Greece is today not in a position to service its accumulated debt. Greece can only come closer to debt sustainability - and it is currently a stretch to speak of achieving it – if the reduction in the face value of accumulated debt is not offset by an increase in the price (yield) of servicing the remaining debt.

In order to accomplish this Greece will have to convince the troika of international creditors and market traders that it remains committed to a long-term structural reform process that also has the support of a majority of the population. Any change in this outlook – the fragility of coalition government, continued underperformance in the privatisation process, underachievement in tax revenue collection, a declining political will in favour of administrative reform – risks adversely impacting on debt sustainability and external creditors’ assessment of Greece’s performance.

The agreed sovereign debt objectives between the Greek authorities and the troika – 124 percent of GDP by 2020 and “considerably below” 110 percent by 2022 – will hardly be within reach if the structural dynamics of Greece’s sovereign indebtedness continues to grow as a result of the sustained economic recession.

It is equally noteworthy to underline that the definition of Greece’s debt sustainability is subject to a political designation and therefore does not constitute an exact science. In this observation are reflected the experiences of the past three years when it was not at all given that the three institutional members of the troika would apply the same measuring rod to the calculation of Greece’s sovereign debt and its medium-term sustainability.

More specifically, the IMF has been the most proactive troika member to repeatedly draw attention to the lingering issue of debt sustainability. The public controversies among the troika representatives about the critical issue and its implications in the case of Greece’s underachievement over time have given rise to the Washington institution pondering potential exit scenarios.

3.         The international dimension of debt restructuring

There was severe collateral damage from the exercise on Greece’s neighbour in the Mediterranean. The knock-on effects on Cypriot banks were immediate, and exploded into a full-blown crisis in April 2013.

Let me offer some reflections on the uneven distribution of costs and unbalanced availability of compensation. There are at least four domestic stakeholders that suffered considerable collateral damage, i.e. incurred costs. In three of these cases the costs were not compensated for by either the Greek authorities or the availability of additional financial assistance from international creditors.

a. In the decade leading up to 2010, Greek social security funds were next to domestic banks among the largest investors in the country’s sovereign debt. But the parallels stop there. Whereas four systemic banks were recapitalised following the two debt restructuring exercises of 2012, the social security funds were left to their own devices. They incurred losses totalling 12 billion euros on the write down of their Greek government debt portfolio. This had a direct impact on their ability to pay pensions on time. Furthermore, the regular budgetary adjustments resulting from financing gaps in the social securities’ balance sheet are a recurring bone of contention between the government and the troika of international lenders.

b. The Greek sovereign accumulated in excess of 10 billion euros of payment arrears during 2000-10. One stakeholder affected by this is pharmacists and pharmaceutical companies operating in Greece. These private sector creditors of the government received Greek Government Bonds (GGBs) in lieu of cash payments to cover for some of these accumulated arrears in 2010/11. But when the GGBs were restructured in 2012 there was no compensation available for these holders of sovereign debt. The net effects were company closures and job losses in the sector.

c. A third constituency directly and adversely affected were the more than 15,000 private retail investors in Greece. These citizens, many of whom are pensioners, had decided to invest part or all of their life’s savings in Greek government bonds right up to early 2010. Being told by their bank’s branch manager and receiving reassurances from media coverage that this was a safe investment with regular coupon payments, these investors are today aggrieved, poorer and hold a bag of resentment.

d. The fourth stakeholder to be added to the cost-benefit analysis of debt restructuring concerns the banks themselves. The need to recapitalise four of the systemically relevant domestic lenders arose from the PSI-related losses and write-offs that banks incurred. Post PSI they had negative capital on their balance sheets. In stark contrast to Ireland, Greek banks did not create the problem (a sovereign debt crisis), but now they owned the problem and its adverse consequences.

The issue of burden sharing will continue to take centre stage in any future financial rescue programmes that involves the members of the troika. In particular the IMF is using the lessons learned from the Greek and Cypriot experiences to internally evaluate how bond investors can be brought to share the pain in any future eurozone rescue programme. One option being considered is to impose upfront losses on such investors. However, the Fund itself is quick to underline that its status as a preferred creditor is not affected by such considerations of burden sharing. Put otherwise, its own money as a lender in Europe today is not at stake.

* Jens Bastian is an independent economic and investment analyst for southeast Europe. From 2011 to 2013 he was a member of the European Commission Task Force for Greece in Athens.

[2] Some inconvenient truths about the German and French crisis narrative on Greece deserve to be remembered, even if revisiting them provides some uncomfortable reading for various banking executives in both countries. In the second quarter of 2010, with the Greek sovereign debt crisis taking center stage in international capital markets French and German banks had more assets invested in Greece than banks from any other country in the eurozone.