You are at: Home / Agora / Eurogroup marks end of cycle and squaring of circle for Greece

It was in Luxembourg in October 2009 at a Eurogroup meeting that the Greek crisis formally began when the finance minister of the newly elected Greek government at the time, Giorgos Papaconstantinou, informed his counterparts that the previous New Democracy administration had essentially been lying to them about the state of the country’s finances. This was an admission that led to the then Eurogroup president Jean-Claude Juncker delivering the famous phrase: “The game is over, we need serious statistics.”

It is again in Luxembourg on Thursday that Greece will be the main topic of yet another Eurogroup, only this time with the purpose of putting in place the final pieces that will define the country’s existence outside of adjustment programmes.

Eurozone finance ministers are called upon to decide how Greece will be monitored in the post-programme period as they have collectively committed close to 231 billion in loans to Greece: 52.9 billion in bilateral loans during the first programme, 130.9 billion from EFSF for the second programme and 46.9 billion so far for the progamme that is about to conclude in August.

This is 126 percent of Greece’s expected 2018 GDP and makes the eurozone by far the largest stakeholder in the country’s affairs.

The contentious issue going into this Eurogroup is how to square the circle of providing enough additional debt relief that will make this debt sustainable in the long term in a way that will secure the seal of approval from the International Monetary Fund, which the eurozone has identified as the ultimate authority on this matter, while not providing debt relief that will be politically challenging in the member states.

Although Thursday’s Eurogroup will be the one to confirm the debt relief deal, the decisive Eurogroup meetings for the parameters of the measures that are going to be deployed were in May 2016 and June of last year. In the first - following the conclusion of a review that lasted nine months due to ongoing disagreements between the eurozone and the IMF on fiscal, growth and debt projections - there was a conclusion on short, medium and long-term debt relief options that were specific enough to implement in the near-term and vague enough to keep the IMF at the table.

At last summer’s Eurogroup, the then German finance minister Wolfgang Schaeuble led a colourful debate (according to leaked notes) and resisted with success any further clarity and change to the framework of the medium and long-term debt relief measures that were agreed in May 2016. After a French proposal, the only addition was a mechanism that would automatically adjust Greece’s debt obligations depending on economic growth outcomes. This was designed to address the IMF’s much more conservative view on Greece’s long-term growth prospects.

The short-term debt relief measures have already been implemented and mainly made the repayment profile to the ESM smoother, reduced interest rate risks for Greece by the ESM locking low interest rates and partly abolished some interest rate charges from 2012. 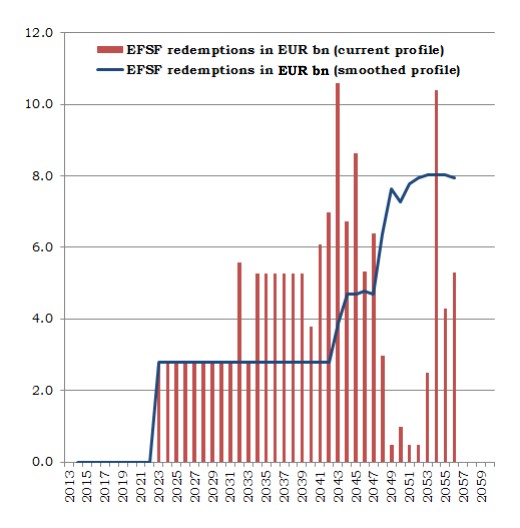 The medium-term debt relief measures that form the parameters of the current negotiation as defined in 2016 and re-affirmed in June 2017 include:

- Early partial repayment of existing official loans to Greece by utilising unused resources within the ESM programme to reduce interest rate costs and to extend maturities.

- Some targeted EFSF reprofiling (e.g. extension of the weighted average maturities, re-profiling of the EFSF amortisation as well as capping and deferral of interest payments) to keep GFN under the agreed benchmark, of 15 percent and later 20 percent of GDP, in order to give comfort to the IMF and without incurring any additional costs for former programme countries or to the EFSF.

Additionally, last summer’s Eurogroup introduced for the first time the concept of the cash buffer, by committing disbursements to build up cash buffers “to support investor's confidence and facilitate market access.”

Here is what Greece could realistically expect from these debt relief interventions.

The step-up interest rate margin applies to the 11.3-billion-euro instalment of the second programme that was used to finance a debt buy-back in the end of 2012. A margin of 2 percent was foreseen from 2017 onwards. This margin was not charged in 2017 and could be completely abolished from this year saving Greece roughly 220 million annually.

These are profits that the European Central Bank and other eurozone central banks make from their holdings on Greek bonds. They are due to be paid in full, along with interest payments, after being purchased at lower prices at the start of the crisis. These holdings were at some point put in the scope of reprofiling to make near-term debt repayments smoother but central banks had resisted this as a debt relief measure.

These profits are distributed to their respective finance ministries and since 2012 finance ministers had committed to passing those profits to Greece for debt servicing purposes. This process was interrupted in the acrimony of the first half of 2015 but could bring to Greece an additional 4 billion euros in instalments if reform and fiscal targets are met over the next few years.

We analysed in a recent blog that the IMF is a prime candidate of having all, or parts, of its loans to Greece pre-paid through unused ESM funds from the current programme. The IMF is one of the primary official creditors between 2019 and 2024, with loan repayments amounting to almost 10 billion euros.

Overall, out of the total of nearly 44 billion euros of debt maturities in the first five years following the programme completion just 10.6 billion is held by the private sector. 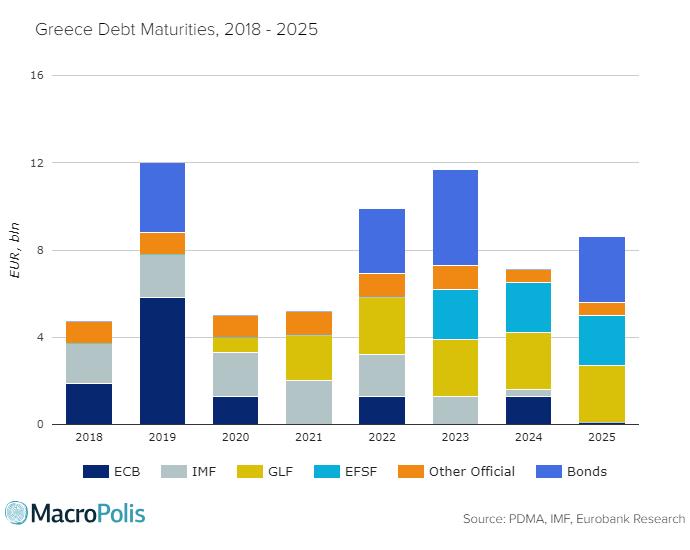 Prepaying the IMF will significantly reduce the financing needs in the immediate post-programme period.

Prepaying the bonds held by the Eurosystem could be an additional option but then it would bring concerns that have been raised in the past of potential monetary financing and this financing need will probably be addressed by building a cash buffer large enough to cover those bond maturities over the next couple of years.

In the current schedule, the different loans that the eurozone has extended to Greece have various characteristics.

The loans of the first programme, known as the Greek Loan Facility (GLF), are due to be repaid from 2020 and be fully settled by 2041.

The loans of the second programme from the EFSF have a grace period up to 2023 and an average maturity of 32.5 years, expected to be repaid in full by 2056. Additionally, these loans have a grace period for interest payments which have been deferred to 2023.

The loans of the current programme by the ESM have an average maturity of 31.7 years, with the first payment due in 2034 and full repayment by 2060.

The only loans that the eurozone considers to be in scope for reprofiling are the loans of the second programme from the EFSF.

As noted in the previous chart and having also been noted on several occasions by the IMF, the repayment profile of those loans becomes steeper from 2040 onwards and Greece could expect an extension of those maturities to make the repayment needs smoother. What could also be in scope is extending the grace period and further deferral of interest payments beyond 2023 to reduce the financing needs in the medium term.

In its second compliance report, the European Commission provides an extensive assessment of how the cash buffer would shape up and function.

Greece has already received 1.9 billion euros from the ESM to build up the cash buffer, while via its own resources from recent bond issue activity Athens is expected to have accumulated approximately 6 billion euros for this purpose.

The Commission sees the remaining disbursements until the end of the programme at 18.4 billion euros, which suggests available ESM funding for the cash buffer at 10.2 billion euros and unused ESM funds at 27.4 billion euros.

The combination of ESM funding, Greece’s own bond issues, revenues from privatisations (expected at 2 billion in 2018 and over 1 billion in 2019) set the current cash buffer plan at 18 to 19 billion euros, excluding repos and cash from general government bodies that has been moved to a special account in Bank of Greece and currently stands at 20 billion euros.

The Commission estimates that without any prepayments of the official sector loans a cash buffer of 17 billion would cover financing needs for 12 months after the end of the programme, while 20.3 billion is needed to fully cover financing needs through to end 2019 and some 30 billion until end 2020.

To bridge the gap in growth projections between the IMF and the eurozone in the Eurogroup last summer, the French proposed an automatic mechanism. Depending on growth outcomes versus estimates, the mechanism would kick in and provide relief that would keep Greece’s gross financing needs at 20 percent of GDP by extending maturities and adjusting debt repayments. The IMF wants this relief option automatic and not conditional on policy so it can plug it into its own Debt Sustainability Analysis.

There has been resistance from certain eurozone member states on the automaticity of this mechanism due to concerns that growth might disappoint as a result of adverse policy decisions by Greece or that it might create perverse incentives on Greece’s side as lower growth would automatically lead to lower debt obligations.

Although these concerns are debatable, the most likely outcome is that this contingency mechanism will shape up as was initially planned in May 2016 when eurozone finance ministers agreed it would be activated “in case a more adverse scenario were to materialize.”

“The Eurogroup would consider the activation of the mechanism provided additional debt measures are needed to meet the GFN benchmark defined above and would be subject to a decision by the Eurogroup confirming that Greece complies with the requirements under the SGP,” the statement added.