You are at: Home / Agora / After the tweetstorm - Tracing the course of #IStandWithGreece

The decision followed a rapid escalation in the arrival of migrants, following Turkey’s decision to stop abiding by the joint Turkey-EU declaration of 2016, under which it had agreed to host refugees in exchange for EU aid. According to local reports, the migrants were driven by rumours propagated by the Turkish authorities that the border was open, and were provided with free transport to the crossings from Istanbul and other cities.

As the migrants continued to arrive, there were clashes with Greek border forces in which tear gas was fired from both sides of the border. Images of the clashes and the gathering crowds quickly went viral, and the hashtag which came to dominate the social media traffic over the hours and days which followed was #IStandWithGreece.

With the help of a proprietary social media analytics package (Discovery & Analytics – www.discoveryandanalytics.com) we are able to shed some light on the emergence of a pan-European tweetstorm, with a strong political flavour. Interactive versions of the reports are available to view here. What follows is a brief commentary. 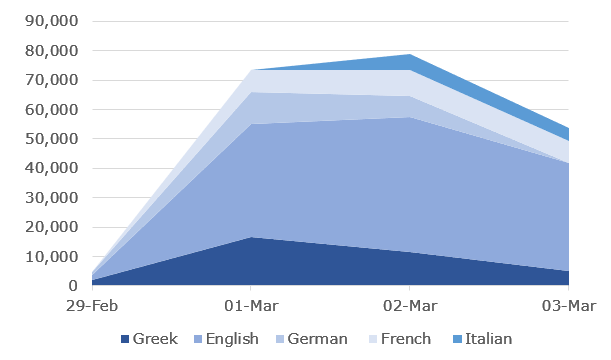 Up to half of the tweets are written in English. Greek-language tweets account for up to a third of traffic on any given day, with German, French and eventually Italian also featuring prominently.

The tweets make heavy use of visual media, including photos and embedded videos – in most cases unattributed – either claiming to show scenes from the border or the sea crossing from Turkey, or purporting to debunk “fake news” relating to the unfolding events. They often urge users to “tweet solidarity”.

There are several recurring themes in the tweets: the accusation that Turkey is “weaponsing” migrants, who are themselves often described as “invaders”; the claim that Greece is “under attack” and “under siege” (the hashtags #greeceunderattack and #greece_under_attack are frequently used alongside #IStandWithGreece); praise for the Greek forces for protecting not only their country but also the borders of the European Union; mocking references to the assembled migrants as “poor immigrants” and “refugees”; drawing attention to young “fighting age” males in the crowd, often accompanied by references to the ISIS terror group, and allegations that migrants were deliberately using children to elicit sympathy. The European Union is castigated for not doing more to support Greece and block the path of the migrants/invaders.

A subset of the tweets makes use of militaristic historical and pop-culture references alluding to the notion of a “clash of civilisations” between west and east.

Birth of a tweetstorm

#IStandWithGreece was first deployed in connection with the border closure by a U.S.-based Trump supporter. It received a single re-tweet, from a Greek account. Two more U.S.-based accounts used the hashtag independently; both have followers in the double digits and were only rewarded with a few retweets.

The main trend appears to have started from a tweet by an obscure blogger, retweeting a statement by Greek PM Kyriakos Mitsotakis. According to his profile, Marco Gallina, who uses the twitter handle @434Italo, authors a blog registered to a German internet address, with Italian themes, writing primarily in English. His main subjects are music, art and food, and he claims in his FAQ to avoid politics “with the exception of regionalism”. 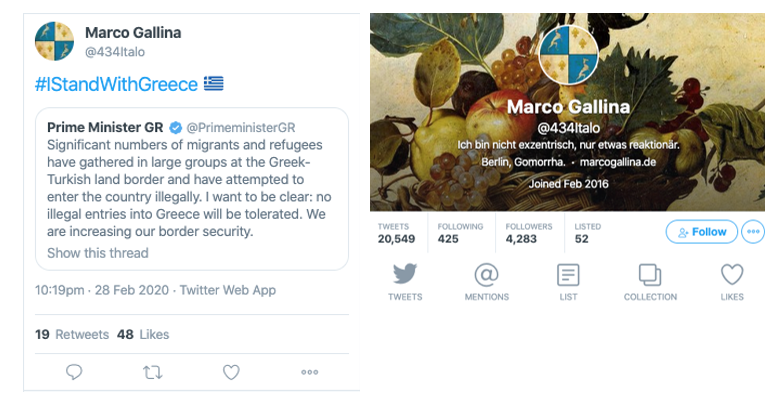 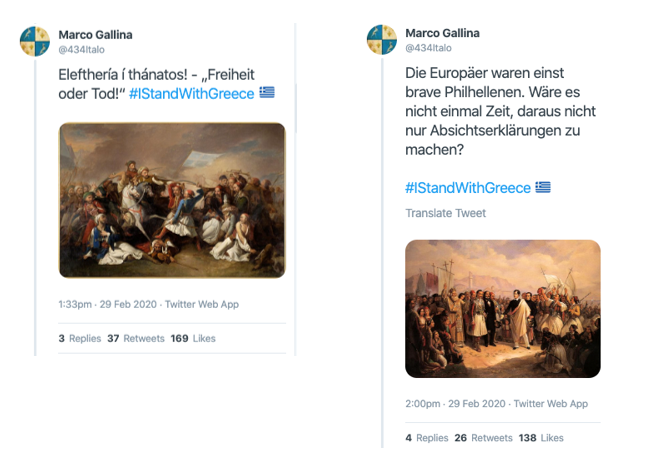 Several tweets follow in German. Many are illustrated with historical paintings depicting events from the Greek war of independence against the Ottoman empire (1821-1832), drawing a clear parallel with current events. One quotes the Greek rallying-cry of “Freedom or Death”, and another asks “The Europeans were once good Philhellenes. Isn’t it time we made a declaration of intent?”.

The link to historical Philhellenism is picked up by another German account. 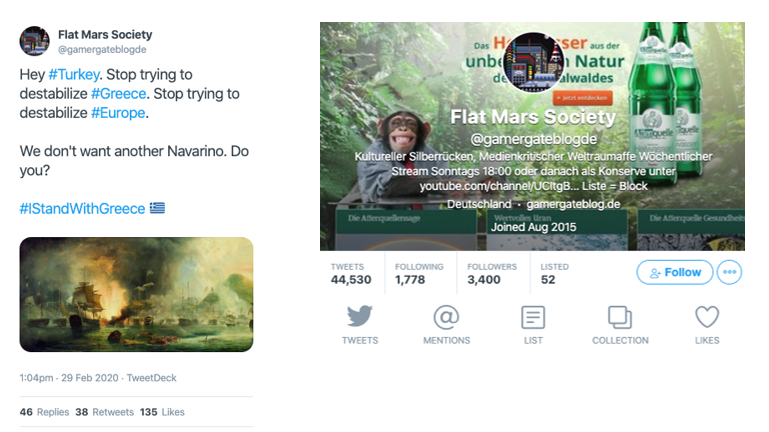 The reference to Navarino (1828) - a major sea battle in the war of independence, in which the British, French and Russian fleets defeated the Ottoman and Egyptian navies – is a call for Europe to unite against the new Ottoman threat. This is clearly the allusion of a philhellene rather than a native Greek; the battle of Navarino does not hold a prominent place in the Greek popular accounts of the war of independence, which tend to downplay the role of the Great Powers in the defeat of the Ottomans and present the victory as an autochthonous achievement.

Another recurring quasi-historical meme is the reference to the 2006 animated film “300”, depicting the battle of Thermopylae (430 BC) in which a force led by Sparta held off an invading Persian army. The battle, and the Persian wars in general, are often referred to by advocates of the “clash of civilisations” interpretation of history as an early instance of what they see as an age-old contest between east and west. The implication is that by guarding its borders Greece is protecting the European way of life against the eastern invader. The cinematic depiction of Thermopylae, and the phrases “This is Sparta” and “Molon lave” (Come and get it) attributed to the Spartan king Leonidas, have been appropriated in recent years by the U.S. gun lobby and the far-right. 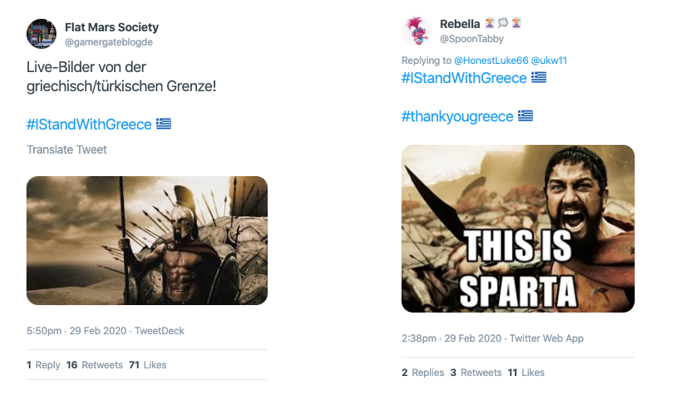 The popularity of the hashtag eventually drew the attention of Greek twitter users, prompting them to join the trend.

The tweets above read: “Guys I’m going to go crazy. The Germans have started the hashtag #IStandWithGreece after the attacks we received at Evros”; “#IStandWithGreece has reached Greek trends”; “Guys, I have no words and from so many what can I say!! I hope it becomes a worldwide trend #IStandWithGreece”.

The most popular tweet in the first hours of the trend was a Greek-language tweet by a Polish Catholic journalist, thanking Greeks for protecting not only their own borders but those of the EU. 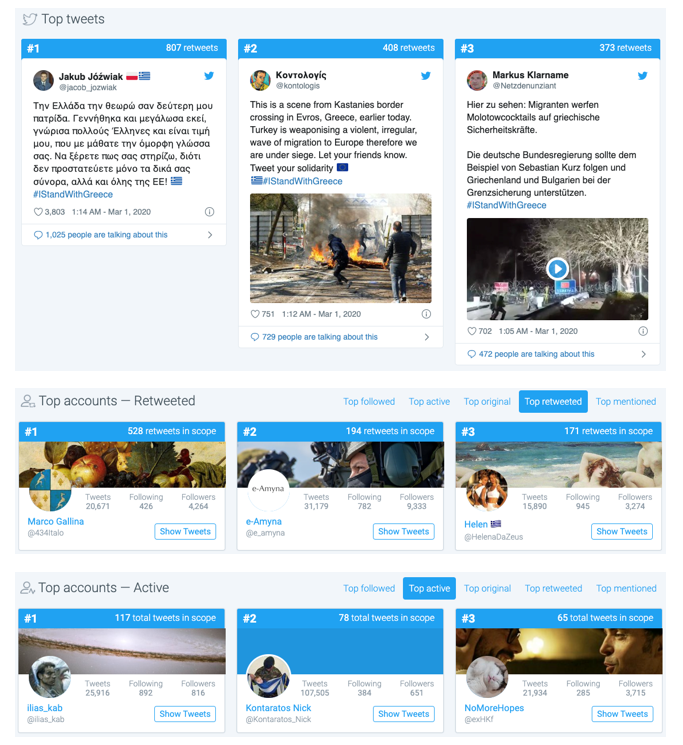 Over the ensuing days the use of the hashtag gathered momentum and its geographical reach amplified. After German, Greek and English, French- and Italian- language tweets appeared in significant numbers. English as a lingua franca of the internet is also used by accounts in other European countries, including Greece and Poland, clearly targeting a global audience.

As the trend progresses, the quirky historical references become subsumed in contemporary media images. It is also interesting to note that while the first couple of days’ activity appears in large part organic, by the third day there are clear signs of bot activity, for example the top active account @mercina18, which was opened in March 2020 and only has 2 followers. 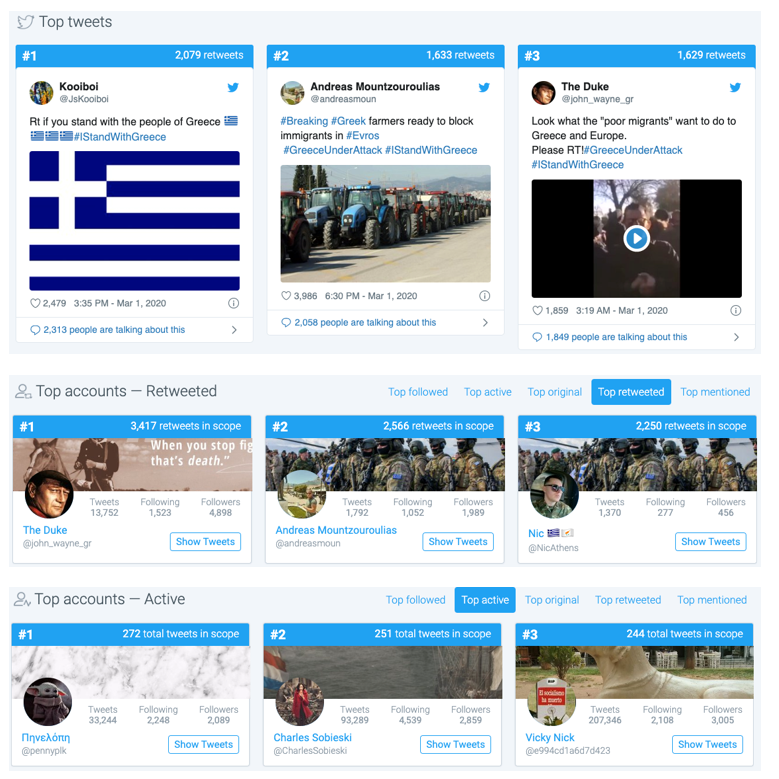 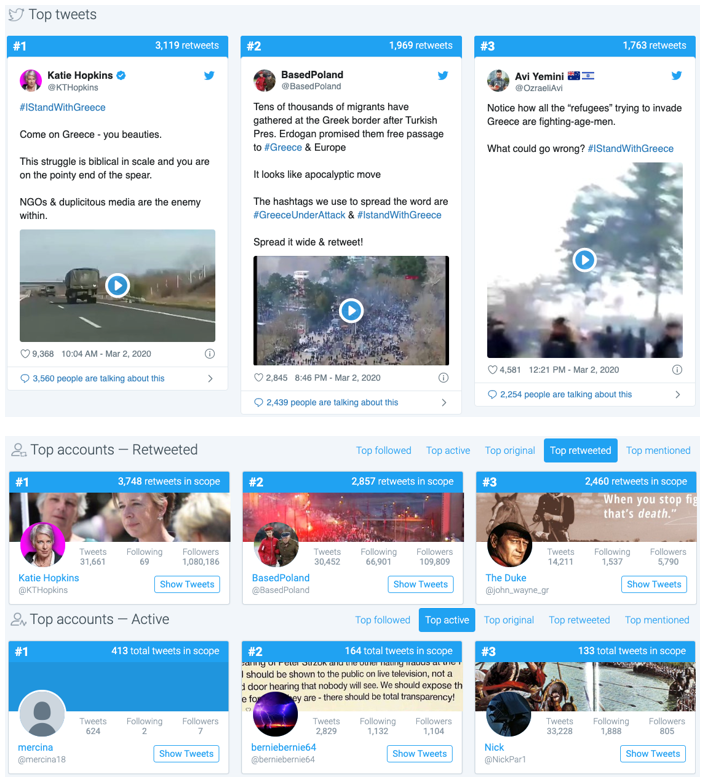 The hashtag also gained traction from support by European far right influencers, including Katie Hopkins, who provided the most popular tweet on March 2, and was the most re-tweeted account on that day. Several regional accounts of the German AfD party have also tweeted using the hashtag, as has Nick Griffin, the former leader of the British National Party.

In Greece the reception to what is seen as a show of pan-European solidarity has been enthusiastic, if perhaps somewhat naïve. The trend has been written up approvingly by the right-wing press, while many mainstream political figures, commentators and even journalists have been using or retweeting content with the #IStandWithGreece hashtag. In doing so, they have found themselves (perhaps unwittingly) circulating or endorsing unverified or misleading claims. 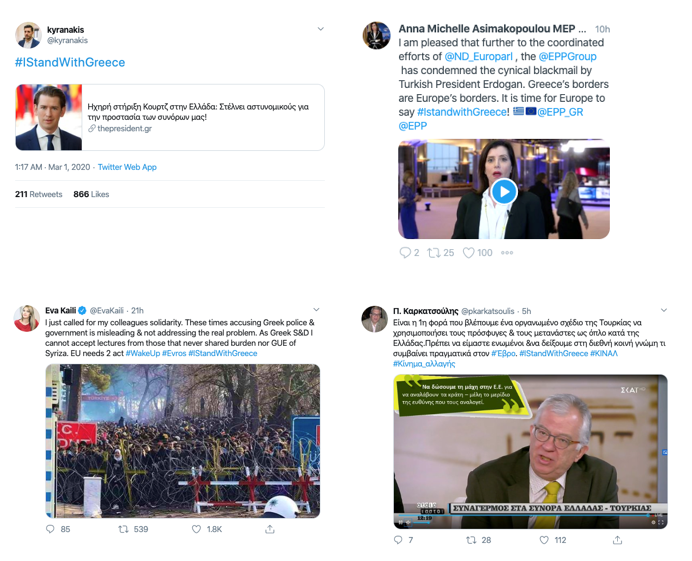 Framed as a statement of solidarity with Greece, the #IStandWithGreece hashtag shares several features with the more familiar #ThisIsACoup hashtag which greeted the EU’s demands in the wake of the Grexit referendum in July 2015: it started outside Greece, it is multi-lingual, and has a strong political slant – in this instance firmly to the right of the political spectrum.

While the domestic political debate in Greece is being shaped increasingly by the language and imagery of European nativitsm and identitarianism through concepts like the “great replacement”, this latest phenomenon suggests that the ties are becoming closer and more reciprocal, channelled through hashtags and memes but rippling well beyond the social media.