You are at: Home / Agora / Why is it taking so long for the pandemic to end in North Macedonia?

Why is it taking so long for the pandemic to end in North Macedonia?

At the beginning of the pandemic, we estimated that it would probably last for two years. Today, a year and seven months later, I’m wondering if that will be the case with North Macedonia.

Not because of the lack of mechanisms and means to reach the end, but because of shortcomings in five key factors that lead to that end: vaccination, trust in institutions, clear governmental strategy, communications with the public, and the healthcare system.

The fourth wave of COVID-19 is upon us. Although the peak seems to have passed, as indicated by the decline in the reproductive number and the gradual decline in the number of active cases (see Graph 1), the epidemiological status is still unstable and there is a risk that the wave will draw out or a new wave will appear later this fall and winter. 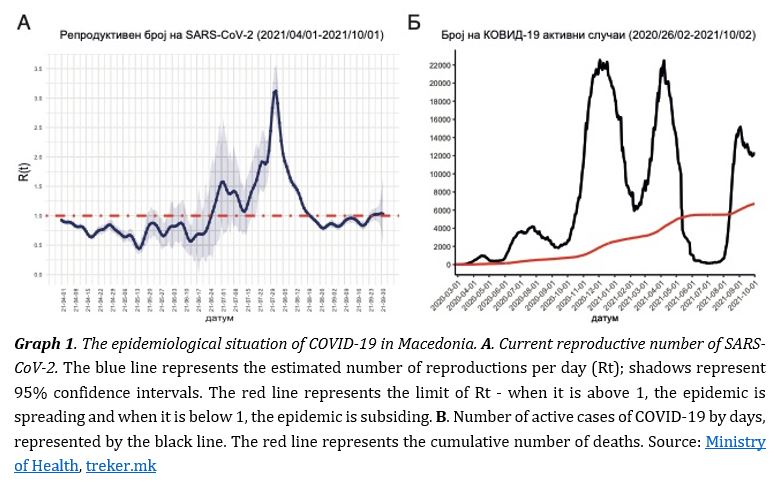 As of October 5, about 6,700 deaths from COVID-19 were registered in North Macedonia, which is one of the countries with the highest COVID-19 mortality rate per million inhabitants in the world. In addition, there is a huge number of unregistered deaths due to the pandemic. According to the latest data from the State Statistical Office, 42,062 people died from the beginning of 2020 to the end of June 2021. In the given period, according to the model of expected mortality, I estimate that 32,769 people would have died if there was no pandemic. Which means that about 9,300 more people died than if there had not been a pandemic. By that time, about 5,500 COVID-19 deaths had been reported - some 60% of the surplus deaths (see Chart 2). 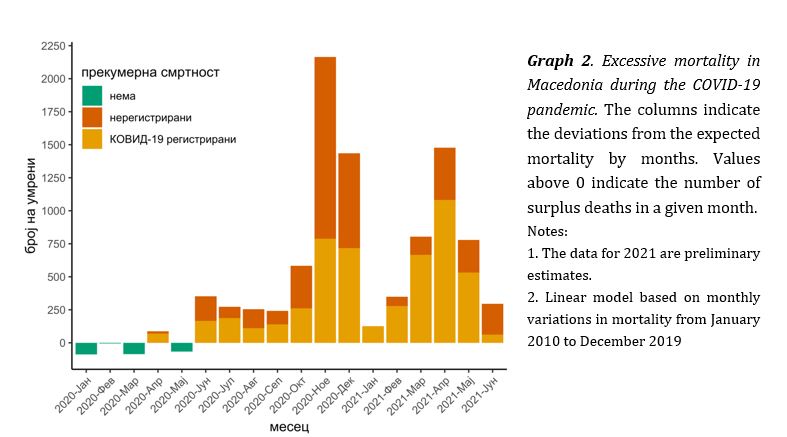 The question is how many of the remaining surplus deaths were directly caused by COVID-19 and how many died prematurely from other diseases - cardiovascular disease, cancer, diabetes, etc. It is a huge loss in a short period of time. It is as if we have prematurely lost the population of a town the size of Resen, people who could have had years of life ahead of them.

One of the reasons for the poor management of the pandemic is the lack of a consistent and clear governmental strategy. Many of its decisions were reactionary, late, or with controversial justification. This was especially evident this past summer, when the government almost completely abolished measures without controlling entry into the country of potentially infected persons, even though the vaccination rate was extremely low. Also, mass gatherings at weddings and other events led to a premature fourth wave that quickly spread and led to the complete undercutting and weakening of discipline amongst the people.

The balance between preserving the economy and the functioning of society versus adopting measures to combat the pandemic was far from optimal, but this is not a problem only in North Macedonia, but in most countries in the world, including other Balkan states. Major politicization and exploitation of the crisis for inappropriate showdowns between political opponents contributed to the further deterioration of the situation. Politicians did not work together to protect the interests of the people and the state, but behaved selfishly, with ignoble, short-term goals for gaining power.

I believe that this political atmosphere and governmental inconsistency, accompanied by years of selective law enforcement, as well as subsistence insecurity that the system offers in terms of workers’, gender, social and health rights, have seriously affected the motivation and will of the people to defeat the biggest state health crisis ever.

The pandemic has exposed the weaknesses in the Macedonian healthcare system, which has been short of staff, equipment and infrastructure for years. We have good staff, but they do not have proper working conditions and they are experiencing burnout because they had to treat a huge number of COVID-19 patients at once, which led to the neglect of other diseases, which probably contributed to the excessive mortality. The work of private hospitals and laboratories in terms of pricing and way of treatment has remained unregulated for the most part. They have existed as parallel structures, outside the national pandemic strategy, charging enormous sums in times of crisis.

Going forward, we will perhaps face the last wave of the pandemic, given the increase in baseline reproductive numbers and the size of the rest of the population vulnerable to infection, and I am still not convinced that there are clear national protocols for guiding and treating patients with COVID-19 in primary health care. Local level protocols in hospitals exist, like the one at the Infectious Diseases Clinic in Skopje, which is set according to evidence-based medicine and is updated locally (link to an old version). However, standardized, clear national protocols at the state level are obviously a necessity for both primary care physicians and hospitals, as evidenced by doctors working out on field. We really cannot blame PCPs for non-standardized treatment because they have received erroneous instructions from state institutions via email to prescribe high doses of ivermectin, high doses of vitamins and antibiotics for treatment of COVID-19, as opposed to following evidence-based medicine.

In addition, two professors at the Faculty of Medicine recently, and once again, publicly recommended the use of the controversial ivermectin. At present, no serious institution in the developed world has recommended the use of ivermectin for COVID-19 and it will remain so as long as there is no solid data to justify its use. These include the US Food and Drug Administration, the European Medicines Agency and the World Health Organization, which emphasize that it should not be used outside of clinical trials and should not be used for the prevention and treatment of COVID-19.

This non-standardized approach to the treatment of the disease leaves room for serious doubt among the already confused public. Citizens do not know who to trust when renowned doctors in the country make claims that are in direct contradiction with the world scientific-medical consensus.

All of this contributes to mistrust in institutions, but the key contributor to mistrust is misinformation. Many citizens do not follow the recommendations or refuse to get vaccinated due to misinformation and conspiracy theories that have reached them. This leads to faster spread of the virus.

Unfortunately, the state of mass spreading of misinformation did not go hand in hand with extensive health communication. It is disconcerting that many people still do not understand the severity of the COVID-19 pandemic, do not believe the virus exists, do not believe in the efficacy and safety of vaccines, or believe in crazy notions regarding vaccines.

However, it is difficult to blame those people, even though fault can be found in them, because we cannot expect citizens to suddenly start trusting a corrupt system where the law does not live up to its task. We cannot persuade anyone to behave well during a pandemic when there is selective sanctioning of those who disregard the law. Public health is not isolated from other parts of life and all systemic errors have their consequences and have led to the situation we are in today.

However, I still believe that by informing the people and with continuous, transparent communication, we will be able to dispel the myths. There is no doubt that a high vaccination rate is the only way out of this pandemic. Vaccines are safe and highly effective in preventing hospitalization and death from COVID-19 and are likely to protect against severe disease from future strains of SARS-CoV-2 in the long run. With every 100,000 people who get vaccinated in North Macedonia, we save an average of 750 people (see Graph 3A).

After vaccinating over 80% of the adult population, we could return to some sort of normal without restrictive measures, as Sweden did on 29 September. Then, COVID-19 would probably become a much milder disease because most of the citizens would be immune to the virus. However, no protection is absolute, not even vaccine-induced protection. Thus, some people, mainly elderly and immunocompromised individuals, will not be protected from COVID-19 even by vaccination. And for them, maybe a third dose of vaccine would be helpful. So far, there is not enough scientific evidence to support the need for a third dose for the entire population. In fact, it’s now far more important to vaccinate as many people as possible with two doses, before considering a third shot for anyone.

We will continue to see deaths from COVID-19, but thanks to vaccines they will be drastically rarer. Too much attention is paid to the percentage of vaccinated among the deaths of COVID-19 in North Macedonia, which imposes the need to clarify this phenomenon. As the number of vaccinated people increases, especially in the older population, so will their prevalence among the deaths of COVID-19 due to the simple mathematical ratio (see Graph 3).

Namely, when a small number of people remain unvaccinated, they will simply represent a small percentage of the vulnerable population that can develop a severe form of COVID-19 - it mainly affects citizens over 65 years of age - so they will be less present among the dead. Thus, when we vaccinate over 90% of the oldest population group, we will have a higher prevalence of vaccinated among the dead and it is good to inform the citizens now, so that someone does not use it for future manipulation of false information. 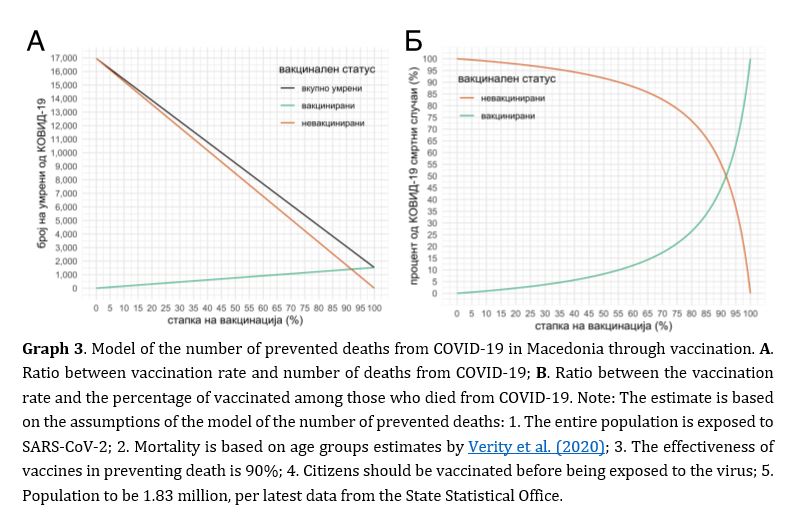 Finally, ahead of us might be the last surge of COVID-19 and each of us has a choice... To be vaccinated with two doses of vaccine and drastically reduce mortality or to further contribute to the huge mortality of COVID-19. It is not just about our lives. When vaccinated, we get treatment at home, we do not burden the system, thus we are freeing up beds in the intensive care units for those elderly citizens who have not developed a good immune response after the vaccine and who are further at risk of death; and there are patients with other diseases who need intensive care.

Anyone who has no contraindications and can help reduce the risk of ending up in hospital with vaccinations has a moral and civic duty to do so. The decision not to get vaccinated is selfish and immature, and it lacks courage and solidarity. The sooner we vaccinate 80% of the adult population, the sooner we will get out of this crisis.

The blog was created as part of the “Tales from the Region” initiative led by Res Publica and Institute of Communication Studies, in cooperation with partners from Montenegro (PCNEN), Croatia (Lupiga), Kosovo (Sbunker), Serbia (Autonomija), Bosnia and Herzegovina (Analiziraj.ba), Albania (Exit), Slovenia (DKIS) and Greece (Macropolis), within the project "Connecting the Dots: Improved Policies through Civic Engagement" with the support of the British Embassy in Skopje.

*Haris Babačić is a doctoral student at the Karolinska Institute in Stockholm, Sweden. Researches proteomics and proteogenomics of cancer and KOVID-19. Since the beginning of the KOVID-19 pandemic, he is actively monitoring and modeling the epidemiological situation in Macedonia. He graduated in medicine at the Faculty of Medicine in Skopje, at the University of St. Cyril and Methodius, at the top of his class. He has a Master's degree in epidemiology from Ludwig Maximilian University in Munich, Germany.