You are at: Home / Agora / The case of SYRIZA's fiscal performance

The case of SYRIZA's fiscal performance

Monthly data are volatile and can jump with leads and lags in revenue and expenditure, and annual data provide only one data point per year, so, instead, calculating a 12-month moving average for each month provides a trend-like picture of what government policy is delivering as regards the overall fiscal balance on an ongoing basis. Figure 1 below shows in the bold line what this 12-month moving average looks like from December 2013 through August 2021. 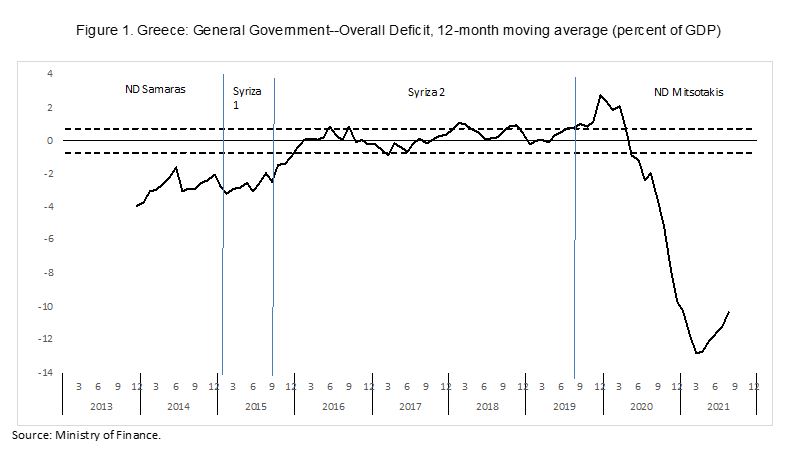 Figure 1 also shows a dashed line at +0.75 percent of GDP and one at -0.75 percent of GDP. This is done for the following reason: we recommend that Greece follow (roughly) a balanced budget objective. Then a gradual structural return to GDP growth will slowly erode the ratio of debt to GDP. Debt in nominal terms, in euros, would stay constant—consistent with a balanced budget that requires that existing debt be rolled over, and that no new net debt be incurred.[1] To allow for “normal” shocks and noise around the balanced budget objective, which always occur, we have created this indicative symmetrical band of 1.5 percentage points of GDP in width around the balance budget objective. If the government were to aim for a balanced budget, but the 12-month moving average starts traveling outside of the margins of this band, then corrective budget action may be called for, depending on whether the country is subject to a large shock (may not be able to fully adjust in the short term), or to more temporary ups and downs (adjustment would be recommended).

In the light of this easily observed objective (zero overall balance and a stable stock of nominal overall debt), we can now see how government policy has behaved relative to this target. Accordingly, what we see in Figure 1 is that Antonis Samaras’ government through end-2014 ran deficits of between 2-4 percent of GDP. This was inconsistent with a balance budget objective.

The first SYRIZA government (January 2015) of Alexis Tsipras, with Yanis Varoufakis in the Ministry of Finance, broadly continued this trend. The first SYRIZA government, however, was a disaster for Greece in multiple dimensions, not least of which was the efficient destruction by Varoufakis of any trust and cooperation with Greece’s eurozone partners. Many recall the painful episode in which Greece escaped in July 2015 by a whisker the suspension from the eurozone, and the turmoil surrounding the referendum called by Tsipras.

Confused and damaged as the first half of 2015 may have been, Greece survived in the eurozone, accepted the conditions of a new (third) program with the institutions that were stricter than the ones just rejected in the referendum, and Varoufakis was replaced by Euclid Tsakalotos as the new finance minister.

But then, the second SYRIZA government ran fiscal policies as if they had adopted a balanced budget rule. As Figure 1 demonstrates, if one ascribes to the benefits of such a cautious fiscal rule, then the second SYRIZA government must be judged to have run an exemplary budget balance policy, hardly ever traveling outside the confidence band of + or -0.75 percent of GDP away from zero. One can discuss the political or ideological inclinations of SYRIZA, but from a budgetary balance and debt management perspective, this performance was an achievement that few expected after the brief first SYRIZA government. The interesting question is: how did SYRIZA accomplish this and why did they do it?

Before we answer that question, let’s quickly complete the timeline. After SYRIZA lost the general elections in July 2019, the opposition New Democracy party gained an absolute majority in Parliament and formed a single-party  government lead by Kyriakos Mitsotakis as premier. At first, the general government budget balance grew above the zero balance band, but then new deficits emerged due to tax cuts and then the impact of the Covid-19 pandemic shock in the economy. Covid-19 is, of course, a very large shock and one that cannot be compensated for in the short run. Consequently, Greece is now far removed from a balanced budget and has incurred substantial additional debt. The risks from very high debt have, if anything, increased, not decreased for Greece.

As noted, the striking path of the general government balance in Figure 1 requires reflection and interpretation. This brings us back to the question what has happened and why, and what might this imply about the potential future success of Greece aiming to emerge at last from the difficult recession in the 2010s? We offer some preliminary thoughts as follows:

The experience since the transition of government to New Democracy and Mitsotakis is difficult to assess because the Covid pandemic has been such a huge spanner in the wheels of recovery. Economic advisors of different stripes would have recommended that the government assist the economy in the face of such a large external shock, no matter who is in office. Thus, reading the ND Mitsotakis numbers requires caution. Here are some preliminary observations:

In the next blog, for December 2021, we will take the ideas about the general government balance and debt, and during different government periods, one step further. We will discuss why even a balanced budget result does not always imply that the debt will stabilise.

[1] For a detailed rationale behind this recommendation of a balanced budget in the case of Greece, see the book: Bob Traa “το σχέδιο του Οδυσσέα” (Economia Publishing, 2019), or its equivalent in English: Bob Traa “The Macroeconomy of Greece” (Amazon.com 2020).

[2] In Blog 10 (October 2021) we demonstrated that the primary income component “indirect taxes minus subsidies” in the National Accounts accruing to government had increased remarkably under the SYRIZA government.

[3] See for instance, the paper, published by LSE’s International Inequalities Institute: The Economic Consequences of Major Tax Cuts for the Rich, by David Hope and Julian Limberg (December 2020), which demonstrates that the last 50 years were a period of falling taxes on the rich in the advanced economies. The paper states that: “Our results show that…major tax cuts for the rich increase the top 1% share of pre-tax national income in the years following the reform. The magnitude of the effect is sizeable; on average, each major reform leads to a rise in top 1% share of pre-tax national income of 0.8 percentage points. The results also show that economic performance, as measured by real GDP per capita and the unemployment rate, is not significantly affected by major tax cuts for the rich. The estimated effects for these variables are statistically indistinguishable from zero.”