You are at: Home / Agora / The positives and negatives that will decide Greece's elections

New Democracy appears on course not just to win the vote, but also to gain an outright majority in Parliament. A recent MRB poll for Ta Nea newspaper indicated that ND would get between 155 and 163 seats, while a Pulse poll for Skai TV suggested that the number of MPs the centre-right party will elect will range from 155 to 164.

The fact that New Democracy beat SYRIZA by almost 10 points in the May 26 European Parliament elections means there is something more tangible to add to the picture presented by the opinion polls. The EU vote showed that the tide has turned in Greek politics and that the momentum is with the opposition party. This feeling was compounded by ND’s dominance in the municipal and regional elections, where in most cases SYRIZA was either absent or defeated. 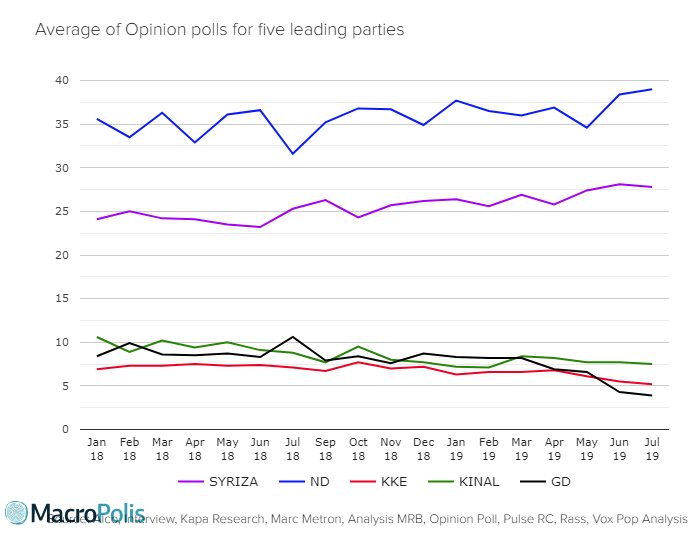 There appear to be only two factors standing in the way of ND leader Kyriakos Mitsotakis becoming the next Greek prime minister: A possible low turnout and how many parties will make it into Parliament.

In terms of the participation on Sunday, Mitsotakis and his team have spent the last few weeks urging Greeks to get out and vote. They are concerned that any complacency which may have set in because of the size of the ND victory in May and the fact the national vote is being held while summer holidays are in full swing will diminish the conservatives’ hopes of electing at least 151 out of 300 MPs. The fact that these are the first Greek national elections to be held in July since democracy was restored to the country in 1974 brings an added element of doubt regarding voter behaviour.

Opinion polls indicate that five parties are certain to enter Parliament: New Democracy, SYRIZA, Movement for Change (KINAL), the Communist Party (KKE) and Golden Dawn. Two other groupings could also pass the 3 percent threshold, ultra-nationalist Greek Solution, which gained almost 5 percent in the EU vote, and Yanis Varoufakis’s MeRA25, which narrowly missed out on electing any MEPs as it gained 2.99 percent support.

If one or both of these smaller parties make it into Parliament, it will make it harder for New Democracy to gain a clear majority as the threshold which the winning party has to pass is directly linked to the total support that goes to parties not able to elected MPs. 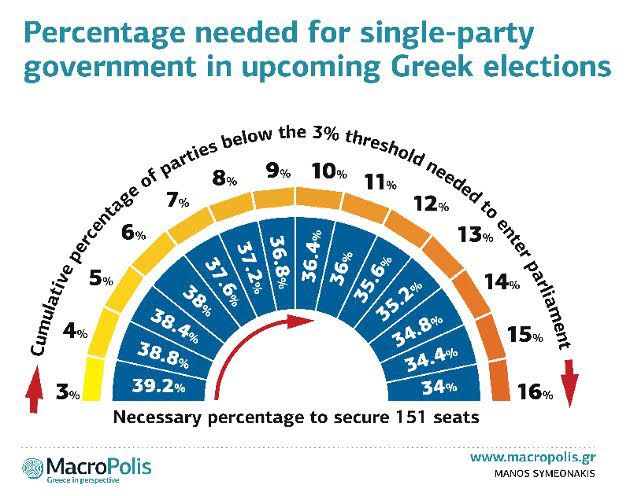 If things fall ND’s way and the pollsters are proved correct, analysts will begin searching for the reasons behind this striking swing in Greek politics. Undoubtedly, it will be worth scrutinising the impact of specific events, such as the Mati wildfire last summer, the Macedonia name deal and law and order issues.

However, it has been evident for some time that there are broader themes at play, which look set to play a decisive part in shaping the outcome of Sunday’s vote. There are two dominant factors, one negative, the other positive, that should be considered when trying to work out what is driving Greek voters most.

SYRIZA’s defeat will primarily be the result of the negative sentiment that has engulfed the government over the last 4.5 years. This has two main sources, and both of them are to do with voters feeling betrayed or disappointed.

The first is that Alexis Tsipras and his party were unable to live up to what they had promised on the economic front. The fraught negotiations of SYRIZA’s first six months in power, resulting in the third bailout, did not just set the country back, they undermined the leftists’ hope of overseeing a quick and easy recovery. Those aspirations were always fanciful given the very tight framework that the eurozone had put in place and the reluctance among many member states to change the formula of sharp fiscal adjustment that wreaked considerable damage in Greece between 2010 and 2015, including to the political hopes of Tsipras’s predecessors. SYRIZA’s misguided hopes were crushed in the most emphatic manner between January and July 2015, delivering a blow that the party has been reeling from ever since.

No matter how many times Tsipras has pleaded naivety, poor choice of colleagues or unfair behaviour by Greece’s creditors, he has been unable to erase the scar that period left on his premiership, the economy and voters’ minds. Tsipras’s government tried to deliver a recovery that would wash away the debris of 2015. The clobbered Greek economy, though, has delivered light drizzle rather than a deluge.

Also, Tsipras has had to implement the same kind of policies that scuppered his predecessors’ chances of survival. He held on longer than they did, but tax rises, pension cuts and restrained public spending make for a radioactive policy mix that no politician can be exposed to for too long, especially when voters are under the impression that they will get exactly the opposite. The SYRIZA leader claims that by going to the Greek electorate in September 2015, he obtained a fresh mandate to implement the third programme, rather than the aspirational Thessaloniki Programme he presented to Greeks a year earlier. Factually this is correct, but voters’ perceptions of reality had clearly not shifted as quickly.

The second element to the negativity that looks set to end SYRIZA’s reign is linked to the September 2015 re-election. One of the reasons Greeks gave Tsipras a second chance is because they wanted more time to see what this political newcomer would bring. New Democracy and PASOK had led Greece into the crisis and were not able to lead it out. The faith in the old system had crumbled and some voters were attracted by the allure of a new party with little baggage, promising to abandon the old, failed habits.

Over the next four years, though, SYRIZA found itself being criticised for exactly the same kind of behaviour as its predecessors: Using public jobs to ensure votes, building suspicious ties with businessmen, trying to control the media, attempting to influence the judiciary and governing with an air of arrogance.

Had SYRIZA not gone down this path and had it lived up to expectations about bringing new and better standards to Greek democracy, voters might have been willing to show some patience on the economic front. In fact, SYRIZA fell short on both fronts and gave hundreds of thousands of voters numerous reasons to abandon the party: 2.2 million voted for SYRIZA in January 2015, 1.9 million in September 2015 and 1.3 million in this May’s European Parliament elections.

A survey conducted by ProRata for the Newpost website a couple of weeks ago indicated that 34 percent of voters would feel disappointment, 21 percent indifference, 13 percent fear and 8 percent anger if SYRIZA is reelected. Just 10 percent would feel hope, which is the commodity SYRIZA traded in 4.5 years ago.

Amid this negativity, there are also positive sentiments shaping Sunday’s result. Perhaps the most significant of these is that voters appear to be rewarding Mitsotakis for looking forward and drawing a line under the last 10 years. His effort  to shape a vision for Greece may not be complete and aspects of what he is proposing will be tested by the country’s particular economic and fiscal circumstances, as well as its unforgiving politics, but for the time being he is reaping the benefits of at least trying to imagine what the coming years will look like.

In its campaign before the European Parliament elections, and to some extent over the last few weeks, SYRIZA seemed intent on reliving the last decade and fighting the battles of 2012 or 2015. Greeks, though, appear intent on moving on. They want to leave the pro-memorandum/anti-memorandum division behind and talk about where their country goes next, how investment can be increased, how jobs can be created, how universities can be in improved and how the young Greeks abroad can be convinced to return.

These are issues that Mistotakis did a much better job of addressing over the last few months. SYRIZA had invested in a strategy since September 2015 of focussing on completing the third programme and being in a position to say in August 2018 that it had succeeded where others failed: It took Greece out of the bailouts, back to growth and back to the bond markets. But the day after Greece exited the third programme, this message became redundant.

According to the ProRata poll, 20 percent of voters will feel hopeful, 10 percent relieved and 9 percent satisfied if New Democracy is elected. There will also be indifferent, disappointed and fearful voters but it is clear that ND is currently stimulating more positive sentiment than its main opponent. When questioned why they are voting for New Democracy, 61.6 percent of the party’s supporters told the Rass polling firm that they are doing so because they believe ND will “take the country forward,” whereas 29.9 percent said they are motivated by a desire to see the back of SYRIZA.

SYRIZA overlooked the importance of presenting its concept for the future, maybe because it did not have such a clear idea. It made an effort to focus on the weakest in society through access to healthcare and benefits, but the message failed to travel beyond those who directly benefited. It was also drowned out by the accusations that the leftists unfairly targeted the middle class, even though data shows that the overall burden was no heavier than before. SYRIZA’s lack of an overarching concept for the country’s future made it susceptible to this kind of criticism but also failed to inspire an increasingly frustrated electorate.

SYRIZA’s rapid rise from the fringes of Greek politics, with limited business and media connections and few roots in Greek society, meant that SYRIZA relied on a confrontational approach to reach office. It knew that a bareknuckle fight with its opponents would be a way of cancelling out any advantages the other side had. The end of the third programme, though, meant this style of politics also became outdated. The exhaustion of the last decades means that, for the time being at least, voters do not see the benefit of all-out confrontation.

Greece’s situation means that growing the economy and rectifying the damage done in education, health, public administration and many other areas over the last 10 years are the priorities. This requires planning, forward-thinking, imagination, open-mindedness and consensus-building. Mitsotakis appears to have tapped into the zeitgeist, but this new reality seems to have passed SYRIZA by. This is why we are likely to be talking about a landslide or walkover on Monday.