You are at: Home / Agora / How SYRIZA lost and New Democracy won

Sunday’s European Parliament elections result in Greece confirmed that the dominance of Alexis Tsipras in the country’s politics, which started with a win in the same contest in 2014, has come to an end.

Data from exit polls and the latest official results point to three main factors that contributed to this reversal of fortunes for Tsipras and his SYRIZA party.

The North did not forget

SYRIZA was decimated in northern Greece following the strong objections in that part of the country to the agreement that settled the name dispute between Greece and what is now called North Macedonia.

This was reflected in the latest results across all regions in northern Greece, where SYRIZA lost resoundingly.

Characteristically, in the first district of Thessaloniki, the most populous area with over half a million registered voters, SYRIZA in September 2015 beat New Democracy by more than 10 percentage points (pps) 35.81 percent versus 25.29 percent.

With more than 70 percent of Sunday’s votes counted, the same district is giving New Democracy a nearly 9 pps lead, with circa 30.7 percent versus 21.7 percent for SYRIZA.

Thessaloniki’s second district with nearly 290,000 registered voters gave Tsipras an even more crushing defeat. In September 2015, SYRIZA led New Democracy in that district by more than 3 pps, 32.9 percent versus 29.5 percent.

With 71 percent of Sunday’s votes counted, the latest result is 35.6 percent for New Democracy versus 17.9 percent for SYRIZA, nearly halving SYRIZA’s score from 2015.

Following a change in the electoral law in 2016, 17-year-old got the right to vote for the first time in these elections. As a result, an estimated 530,000 young voters could go to the polls in total to cast their first ballots.

Connecting with the youth was meant to be one of Tsipras’s assets. An exit poll from the September 2015 elections showed that SYRIZA overwhelmingly won the 18-24 age group by 41.3 percent versus 17.1 percent for New Democracy. In fact, SYRIZA won all age groups except for those 60 and above, which gave New Democracy a 3 pps lead in the 60-65 age bracket and 9 pps on those above 65.

Sunday’s exit polls suggest that Tsipras lost his appeal with young voters, which gave New Democracy a remarkable turnaround, winning the conservatives with 30.5 percent versus 25.6 percent for SYRIZA.

Before the elections, Tsipras left state coffers short of more than 800 million euros as he rushed to pay out a bonus to pensioners a week ahead of the vote to entice pensioners to back his party.

The handout did not have the desired outcome as New Democracy managed to maintain its lead in that age group. Sunday’s exit poll suggests that pensioners voted for New Democracy by nearly 40 percent versus 29.3 percent for SYRIZA. 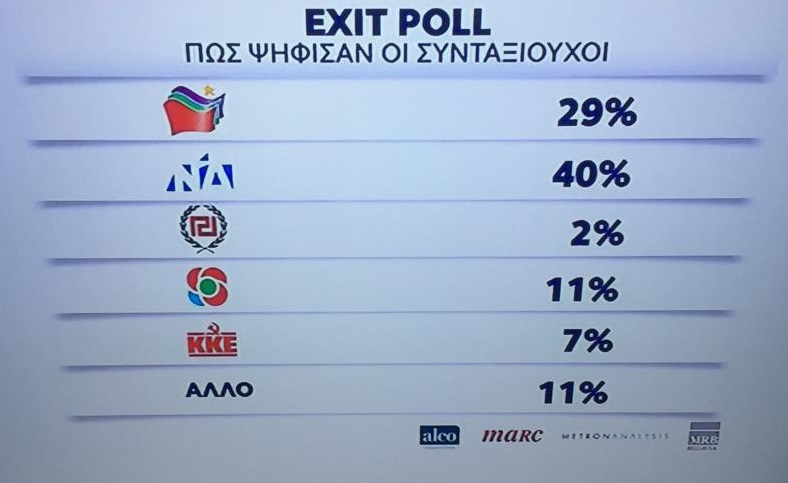 One of the ways that the Greek crisis reflected on Greek politics was the fragmentation of the political landscape, with smaller parties of various agendas making it into Parliament.

In some cases, their purpose was either served or the end of the programmes took away the strongest item on their agenda. They evaporated in Sunday’s vote, with New Democracy being the prime beneficiary.

The movements of voters in last night’s exit poll show that New Democracy got nearly a third of those who voted for centrist To Potami in 2015, 20 percent of the voters of Tsipras’s right-wing coalition partner ANEL, 15 percent from the Union of Centrists and 13 percent of centre-left KINAL voters. 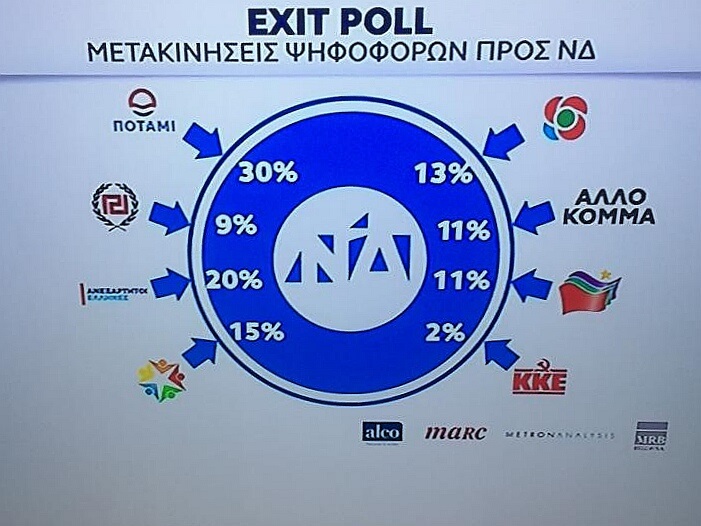 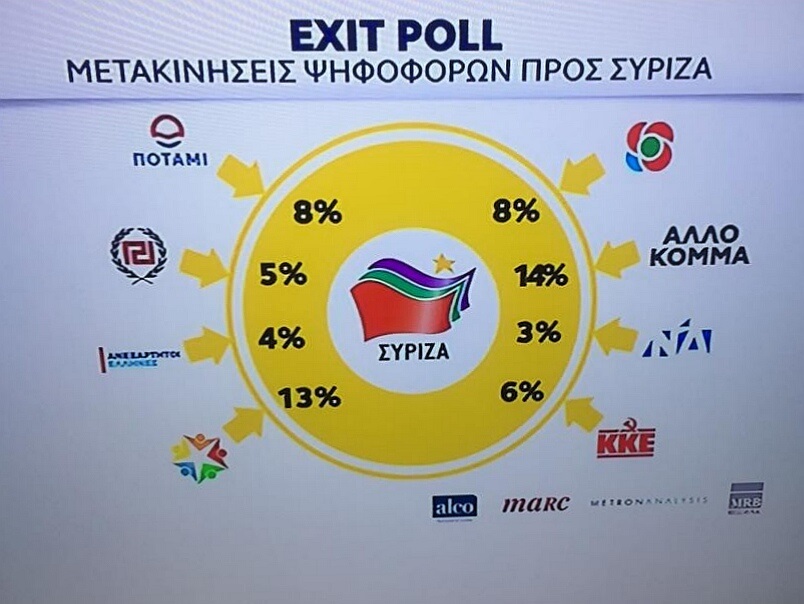 At the same time, the weak mobilisation of SYRIZA voters, which was evident in the opinion polls during the pre-election period materialised on Sunday. Just 64 percent of those who voted for SYRIZA in September 2015 trusted Tsipras again.

New Democracy managed to keep 87 percent of its voters, which combined with the inward movement mentioned above, gave the conservatives a comfortable win.

Most notable of all, New Democracy won 11 percent of those who backed SYRIZA in September 2015. Given that SYRIZA got more than 1.9 million votes in 2015, the movement of close to 200,000 voters to New Democracy proved decisive.