You are at: Home / Agora / Labour compensation and productivity in the EU-27 and Greece

Labour compensation and productivity in the EU-27 and Greece

In blog 6 we noted that measuring productivity in the public sector is not straightforward, because governments do not produce and promote their output in contested markets where the interaction of demand and supply sets prices. Private sector business firms do compete on quality and prices in such markets, domestically as well as internationally. This “market test” is important in order to find out what firms are efficient and productive, and those that are not.

What we have to be aware of, in this context, is that productivity is measured either on the basis of “output” or “input” indicators. For the private sector, productivity indicators are almost always based on output measurements, i.e., real value added and prices in the free market. In the government sector, since output is not marketed as in the private sector, the real value added measures are largely based on input data.

To be precise, the wage bill is a crucial input for value added measured in the government sector. After all, value added, or real GDP, is first measured from the “production side,” and can then be divided alternatively into wages, profits, and a small sliver of indirect taxes minus subsidies. Such calculation is the approach used for the national accounts from the “income side.” The production--or supply--side tells us how much has been produced. The income side tells us how the income proceeds from all this production have been distributed. These two measures need to be the same as real GDP for the entire economy.[1]

Yet, we would argue that even in the public sector, in the long run and as a general equilibrium condition, the government is also subject to market based checks and balances. The political system cannot just increase government wages willy-nilly and believe that there are no (upward) limits. As we have argued before, governments “compete” across international borders, especially in free markets for goods and labor such as in the US and the EU.

If remuneration in government were to be excessive for a long period of time, then the inefficiencies of these government policies would impose a cost on society as a whole and structural economic performance would deteriorate. Poor governance and policies of this sort may lead businesses and talented young people to leave the country to market their skills elsewhere--they thus vote with their feet. Greece is seeing some of these effects. The country is struggling with a long process of finding a good equilibrium for government, government compensation, and governing labor and product markets. The adjustment undertaken so far is incomplete.

Another anchor in our thinking about productivity and remuneration is that eventually, wages reflect productivity. And wage growth reflects productivity growth. Models show that business firms and, we would argue governments, cannot remunerate in a way that is divorced from productivity per employee or (more precise) per hour(-s) worked. Thus, we can think of the productivity developments in a way “upside down”--they tell us something about (sustainable) wage developments in the country. Over time, wages and productivity are two sides of the same coin. This brings us to comparing productivity per hour worked in the EU-27 and in Greece. All data provided are from Eurostat, which facilitates the comparisons.

Consider Figures 1a and 1b below. These show the productivity in real euros (reference year 2015) as measured by gross value added in the national accounts per hour worked. All data are quarterly and adjusted for seasonality and differences in working-days. Thereby Eurostat is giving us a rather precise measure of productivity. In equilibrium, this “productivity per hour worked” can be interpreted as “sustainable wages per hour worked.”

We see that in the EU-27, on average, real productivity per hour worked (“real sustainable wages”) in the economy as a whole have increased between 2000-2020 by about 1.1 percent compounded annual rate, from almost 28 euros in 2000 to just over 35 euros per hour worked in 2020. In the private sector the increase has been 1.4 percent a year, and in the government sector the increase has been 0.1 percent a year. The dip in the Great Recession of 2009-2010 is clearly visible (the damage from the recession); the dip in the Covid-19 pandemic in 2020 is also visible but is less pronounced so far. What is interesting in this figure is that real wages in government, on average, really have not moved much. This different trend is not sustainable in the long run, because governments need to be able to attract good productive employees. Currently, there is a large premium on working for the private sector, rather than for the government. The EU economy overall is moving along relatively steadily. 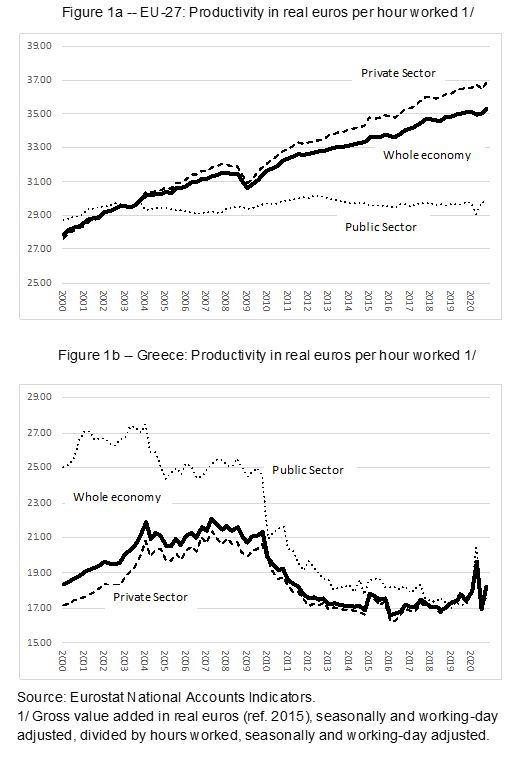 In contrast, the same figure for Greece is quite different and indicates quite a bit of turmoil over time. In Greece, the government sector paid much higher salaries in the 2000s than the private sector (average of around 25 euros per hour, versus 20 euros per hour in the private sector). The Greek crisis (2009ff) brought wage cuts in the public sector, but “wages” as measured by “productivity per hour” remained above those in the private sector even in the 2010s. In 2020, during the Corona episode, hours worked in Greece in Q2 plummeted so that the measure of productivity spiked up (the opposite effect from what has been observed in the EU-27 as a whole). Very slowly, productivity measures in the public and private sectors, per hour worked, are now converging.

Productivity per hour worked, or real “sustainable wages” in the government sector in Greece has declined by 1.6 percent annual average between 2000 and 2020, to around 18 euros. In the private sector, productivity per hour, or “sustainable wages” have increased by 0.3 percent a year on average (much less than in the  EU-27 private sector on average, but slightly above the EU-27 government sector on average).

Finally, we can facilitate the comparison between Greece and its partner countries in the EU-27 side by side in Figures 2a-2c above. In Figure 2a we see that Greece is not as productive as the EU-27 as a whole. Therefore, Greece cannot have the same per-capita income as the EU-27 as a whole. One hopes that convergence will pull Greece into becoming more productive while the EU-27 does not slip over time. Income transfers cannot bridge this difference in a sustainable way. The absorption rate of structural funds will need to improve further. The transparent and efficient utilization of the unprecedented financial resources stemming from the EU’s Recovery and Resilience Fund (RFF) will be critical in the coming years. Positive outcomes depend primarily on the Greek political system and corporate governance capacity of the business sector.

It is also striking that in the early 2000s, even though Greece overall was 33 percent less productive than the EU-27 overall, pay in the government sector was almost at par with that in the EU-27 overall (Figure 2c). In 2020, Greece overall was almost 50 percent as productive as the EU-27 and the difference in the government sector is roughly a 45 percent gap. Put otherwise, there has been relative convergence.

If Greece is to do well within the EU partner group, then productivity growth in the private sector needs to speed up, and labor allocation needs to switch from predominantly to the public sector to predominantly the free and contested private sector. This requires product market reforms and stronger governance for more competitive internal markets. Greece has initiated significant labor market reforms since 2010, but not enough as regards product market reforms or governance reforms.

These are the crucial tasks of the current conservative government that services public employees, larger private corporations, and higher income earners as its primary voter clientele. If Greece can catch up in productivity with the EU-27 and start narrowing the difference that has been growing in the 2010s, then talented young Greeks will stay in or even return to Greece and better dynamic developments of the economy will prevail. That will be the big long-term payoff of reforms in product markets and the government sector.

[1] A third measure of real GDP is from the “aggregate demand side,” or how GDP is absorbed in the demand components of consumption, investment, exports, and imports. All three measures of nominal and real GDP--supply, demand, and income--are equal in total to overall nominal and real GDP.