You are at: Home / Agora / Greece's primary surplus: Much ado about nothing?

As expected, Eurostat disclosed on April 23 its first notification on EU countries’ 2013 deficit and debt figures. It showed that Greece's general government (gg) deficit was at 23.1 billion or 12.7 percent of GDP. The released figure is based on the ESA95 system of national accounts.

The Greek Finance Ministry issued a press release later the same day indicating that Greece achieved a primary surplus of 1.5 billion euros (0.8 percent of GDP), under the Economic Adjustment Programme (EAP) definition, which is used by the troika.

Although the key adjustments were - or should have been - known to market participants, there was a large debate on the legitimacy of how ESA95 and EAP methodologies were reconciled.

In an effort to cast more light on the numbers involved, here are some key points most market participants missed and which should clarify the discrepancy that emerged.

The first point is that Eurostat's figures are identical with those released by the Hellenic Statistical Authority (ELSTAT) on April 14. This means that for those following Greek developments, ELSTAT's press release was a first clear indication on the figures Eurostat would disclose on April 23. Significantly, Eurostat's announcement did not contain any reservations about the Greek figures, unlike during the build-up to the crisis. 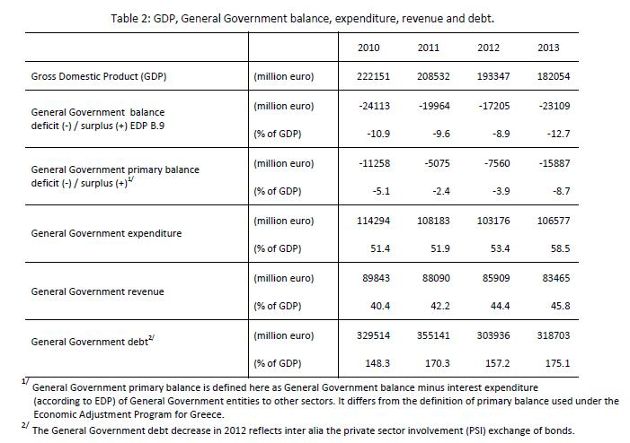 The second key point is that all top eurozone officials repeatedly noted that Eurostat would ratify the achievement of a primary surplus by Greece, which is expected to pave the way for official discussions on further debt relief measures.

What they did not make clear, though, is that Eurostat does not officially report primary balances and most importantly its accounting standards are not the same as those used under the EAP definition.

Unlike Eurostat, ELSTAT had noted in its press release on April 14 that:

So it was not Eurostat that would ratify the achievement of a primary surplus, but a second authority (the EC in this case) that would incorporate Eurostat figures in its calculation under EAP methodology and come out with the final figure. If this had been made widely known, then much of the subsequent misunderstanding would have been avoided.

The third important issue lies with the definition of the primary surplus. Until 2012, the key metric of Greek fiscal adjustment was the gg deficit. Since the November 2012 Eurogroup, the focus has been on the primary surplus target. This is an extract from the statement issued after that meeting of eurozone finance ministers.

The definition of the primary surplus, although not clearly communicated by the troika, was publicly specified as a footnote in the next two EC review reports on Greece in May and July 2013.

Therefore, it had been established that the EAP definition of the primary surplus excludes the one-off bank support costs. The latter stood at 19.72 billion (10.8 percent of GDP) and was the greater cause of misunderstanding following Eurostat's announcement.

Moreover, SMP and ANFA income i.e. transfers from Member States corresponding to profits on Greek bonds held by Eurosystem central banks, which amounted to 1.5 percent of GDP in 2013, were also excluded from the EAP methodology, although included in Eurostat calculation.

This was also indicated by the Greek Finance Ministry in its 2014 budget, where it expected a primary surplus of 3.9 billion (2.1 percent of GDP) excl banks’ support cost under ESA95 rules. This was trimmed to 812 million (0.4 percent of GDP) excluding the SMP and ANFA income under the EAP definition. 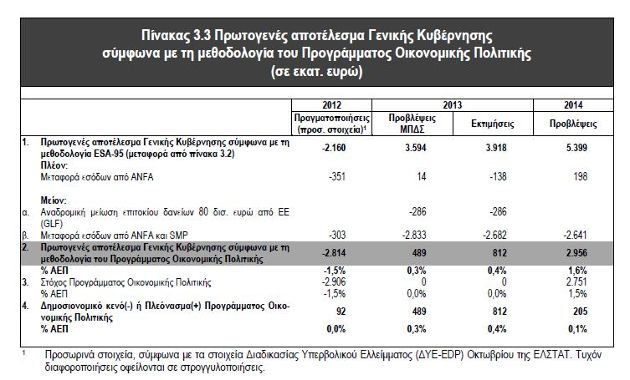 The applied adjustments regarding the exclusion of bank support cost and - to a lesser extent -  SMP and ANFA income clearly indicated from the time they were adopted that they would lead to a ‘country specific’ approach.

The impact of the former was much greater for Greece than for the other countries in 2013 both in absolute terms (19.3 billion) and relative to GDP (10.8 percent) only comparable with Spain (3.7 percent) in 2012. This means that even if Greece managed to curb its deficit eg by 19 billion in 2013 this would be fully offset by the bank support burden clearly distorting the significant underlying fiscal adjustment.

With the financial support completed in 2013, this year’s reported fiscal numbers would hopefully not cause any significant discrepancy and ESA95 figures would be broadly aligned with those under EAP.

The underlying fiscal consolidation is apparent and Greece beat its agreed fiscal targets in 2013. There is, however, a major caveat regarding the creation of new arrears amounting to 1.44 billion euros.

In any case, what Greece has achieved in 2013 was to post a ‘primary’ surplus under the agreed with the troika EAP definition and not to record a primary surplus under any accounting standards as some market participants have perceived or communicated.

Nevertheless, amid the confusion some observers focused on non-comparable numbers and missed the wider picture. In addition, a clearer and more coordinated disclosure of how fiscal targets were being calculated would have avoided any misunderstandings.

*Manos has years of experience in the Greek financial sector. Since 2000, he has served as senior bank analyst at ex-P&K Securities and investor relations officer at Eurobank. Manos worked as head of equity research at Euroxx Securities, the largest non-banking brokerage firm in Greece. You can follow Manos on Twitter: @ManosGiakoumis