You are at: Home / Agora / Public sector capital stock in Greece and the Euro-19

Public sector capital stock in Greece and the Euro-19

Capital is a key input in the production function of a country’s economy. It makes another crucial factor, namely labor, more productive if such capital is efficient (quality) and sufficient (quantity). Thus, to assess how the real output of goods and services is evolving, economists are interested both in the quantity and quality of labor, and in the quantity and quality of the capital stock at the disposal of labor. 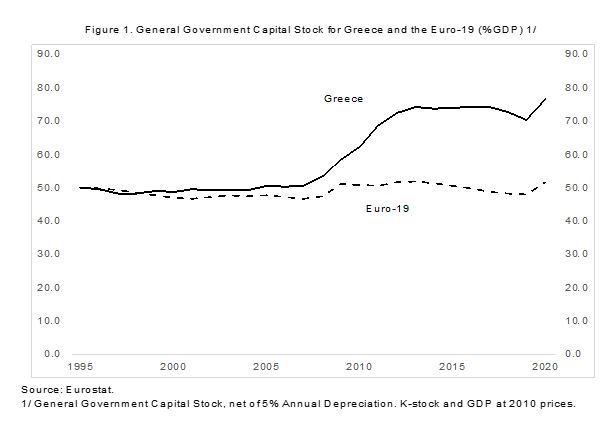 Nominal and real data. Eurostat presents data for nominal gross fixed capital formation (fixed investment spending) by the general government for Greece and Euro-19 for the period 1995-2000. These government numbers in real terms (at constant prices) are not available, but Eurostat does provide data on nominal and real fixed investment spending for the economy as a whole (private and public sector combined). To estimate the time series for general government gross fixed capital spending in real terms, the nominal series were deflated with the implicit deflator for gross fixed capital spending in the economy as a whole.[1]

Benchmarking. Similar calculations of the size of a public sector capital stock have been done for OECD countries and a number of emerging and developing countries.[2] A pattern has emerged: relatively efficient countries have net real capital stocks that vary between 40-60 percent of real GDP.[3] Some countries have higher calculated capital stocks, which generates questions about efficiency and governance. Let us consider a few thoughts on this matter.

·       Greece is a relatively small country with a declining population. The declining population contributes to a gradual loss of economies of scale, making the utilization of capital less efficient (lower productivity). To produce a decent GDP for all people, it is thus possible that Greece may need a slightly bigger capital stock relative to GDP than more densely and heavily populated areas, such as the average for the Euro-19 country group.

·       Greece has many small island communities. This is picturesque and important for the tourism sector, but inefficient from a macroeconomic point of view. Again, the efficient utilization of capital will be somewhat less in Greece than in contiguous countries of the euro-19 that do not need to build separate capital stocks on dispersed islands.

·       The denominator also matters. Greece had a large decline in GDP (flow) in the 2010s. Capital is a stock variable that does not vary as much from year to year. Thus, as GDP declines in Greece more than proportional to the economic cycle for the euro-19 countries as a whole, then the capital stock over GDP will rise somewhat more in Greece than in the euro-19. This is precisely what we observe. Notice that when the euro zone as a whole had a downturn, as in 2009 and again in 2020, it’s capital stock ratio also rose a bit. This is a cyclical effect, not structural over the longer term.

·       Still, Greece now has a net real public sector capital stock that is quite high for efficient countries. GDP is smaller than in the past, and not as much new capital investment should be necessary to support a recovery in GDP. Structurally slower growing countries (e.g. because the population is declining) need relatively less capital investment.

·       The euro-19 countries have seen their capital stock remain relatively stable to GDP. This means, on the one hand, that they use capital efficiently as long as GDP growth keeps up (relatively high productivity). It can also mean, on the other hand, that the euro zone has gradually underinvested and that this is slowing growth in turn (a concern for young generations). Indeed, the ageing of the population is consuming more and more government resources in our welfare states. This may be crowding out capital spending and slowing growth in the European countries at the same time, on average. A new investment effort may be needed to give the European economies a boost.

·       Some countries have engaged in privatization of part of their public sector capital, which could contribute to slowing the capital stock. This may be efficiency enhancing, but it is not assured. Greece also has privatized public capital, and yet the calculated capital stock has risen in percent of GDP.

·       It is possible that the capital stocks need to be transformed away partly from old heavy structures, to green capital, digitalization, and environmental sustainability. This is going to require new and hopefully higher investments in all countries. In Greece, the EU’s Recovery Fund is intended to move in this direction, on top of a relatively big (and somewhat less productive) existing capital stock. Implementation will therefore be key.

·       In the euro-19 countries, the existing traditional capital stock may need some new fresh investments in (traditional, heavy) infrastructure, alongside the same green, digital, and environmental new-age investments that Greece is aiming to undertake. It is obvious that the discussions for the “new economy” are underway everywhere, but this also means that we need to shift back a bit from current spending to more, and smarter, capital spending in our budgets. Are political systems ready to do this and how is this to be financed—more taxes or more debt?

Governance. There are countries with less efficient political systems where the calculated capital stock is much higher than the range of 40-60 percent of GDP that is common in OECD countries. One of the authors has worked on an African francophone petroleum exporting country where the calculated capital stock, based on reported government investment spending, was 165 percent of GDP. Casual observation in the country demonstrated that such a capital stock did not exist, but the president and his family members were all extraordinarily wealthy. Most of the people in the country were very poor.

These are indications of governance problems as a manifestation of unethical and extremely inefficient capital allocation. All countries are challenged in managing the capital budget and preventing corrupt abuse. Good capital allocation and fixed investment spending are thus important to make sure that taxpayers’ money is well used and actually contributes to GDP growth.[4]

Transparency can motivate better policies. One instrument that governments can and should use, is to demonstrate and explain to the voters that they care about efficiency and capital allocation, i.e. to present a public sector balance sheet which includes estimates of the public sector capital stock. Few governments in the world do this, but the voters should ask the political system to present a balance sheet, not only revenue and expenditure in the budget.

Balance sheet capital stock. When we want to assess the efficiency of capital to produce real GDP, we need to ascertain the net real capital stock, as we have shown above. The bottom line for now suggests that Greece is currently less efficient in deploying its real capital stock (lower capital productivity) when compared with the euro-19 group as a whole.

When entities present a balance sheet of assets and liabilities, they will report the net nominal capital stock. So, it is interesting to see what the capital stock numbers would look like that we can introduce into a public sector balance sheet for Greece and the euro-19, respectively. For these purposes, we need to conduct our calculations in nominal terms. Helpfully, Eurostat provides comparable data for the general government nominal gross fixed capital formation and the “consumption of fixed capital.” The latter is the accounting depreciation of the existing capital stock each year. This number may be somewhat different from the 5 percent proxy we used above to calculate the depreciation of the effective economic capital stock in real terms. Figure 2 shows the results for the balance sheet of a net nominal capital stock. 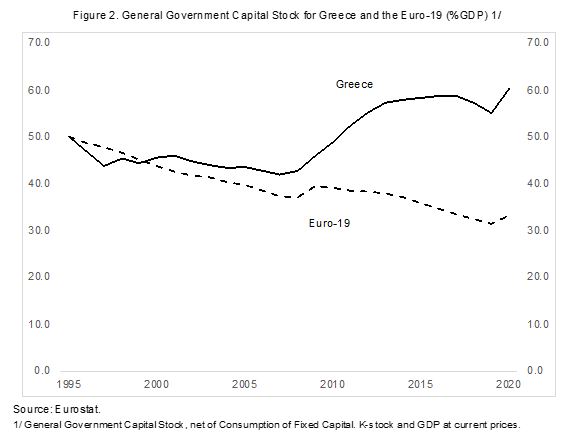 To calculate these results, we began with a hypothesized net capital stock of 50 percent of nominal GDP in 1995. Then, each year, we added the new nominal gross fixed capital spending by the general government, and we deducted the consumption of fixed capital, provided by all governments to Eurostat.

We see in Figure 2 that the relativities between Greece and the euro-19 are similar in real and nominal terms. Greece has a larger capital stock, relative to GDP, than the euro-19 countries. We also see that the capital stocks are not only smaller over time, relative to GDP, but they slowly decline (at least for the euro-19 countries). Why might this be? One factor is that the fixed investment deflator tends to rise somewhat slower than the overall GDP deflator in most economies. Thus, if a component such as the real capital stock experiences less “inflation” from price effects than GDP as a whole, than the ratio between the capital stock and GDP will tend to decline over time. We see this in the euro-19 numbers in absolute terms, and in Greece in relative terms (because the ratio to nominal GDP is lower than in real terms above).

Another reason why this may be happening is if the consumption of fixed capital speeds up somewhat ahead of our notional 5 percent depreciation that we used for the net real capital stock. Indeed, depreciation rates need not be constant over time. If the capital stock slowly drifts away from heavy investments in structures and very-long lived machinery toward capital products with a shorter shelf life such as digital equipment, computers, IT infrastructure, etc., then this changing composition toward shorter-lived capital speeds up the consumption of fixed capital, and depresses the ratio of nominal net capital to nominal GDP. Conversely, it may mean that the government needs to pick up capital spending if the weight toward shorter-lived equipment is speeding up, and if this equipment is necessary to provide a decent and up-to-date government capital stock for the economy.

Bottom line. We argue that governments need to provide to their citizens a view on how they employ capital in the real economy. This is directly parallel to companies, whereby management (by law!) needs to explain how they employ the capital provided by their shareholders. Is the return on capital efficient? Can the performance be benchmarked with partner companies or, as in the case of the Greek government, partner countries in the euro-area?

The estimates of the real and nominal (balance sheet) capital stock provided above are only first proxies, limited by the data to which the public and analysts have access. The government needs to explain what is going on and why. For Greece, this transparency requirement should include why the country has such a relatively big capital stock and what the government sees as a desirable capital stock going forward. If this is very different from what the euro-19 group delivers, then an explanation is due.

In the next blog, we will use the numbers of the balance sheet capital stock to compare a preliminary balance sheet for Greece with that of the Euro-19. Again, comparative analysis can suggest interesting features and where the government needs to be more transparent with the citizens.

[1] If the composition of government and private sector fixed investment spending is very different, then this method may introduce some distortion, but we are not aware that this distortion would be significant.

[3] The ECB Working Paper referenced in footnote 3 has a somewhat wider range from 30-60 percent of GDP.