You are at: Home / Agora / Tailor-made Maastricht criteria for Greece?

One of the first violations of these fiscal rules was carried out by Germany and France during a cyclical setback of their economies. Both countries argued for special consideration. This was granted, and duly noted by the other EU members. The Maastricht rule book never recovered from this blow. Instead, further exemptions, special considerations, and most importantly, complex rules about the speed of correction etc., have been added to the system, as successive countries came up with equally clever reasons why they also needed ‘special consideration’.

As the saying goes, the European federal system develops in response to crises. It has proven less capable of looking forward to anticipate risks. A growing criticism of the EU fiscal rules, then, is that the system has become so complex and by extension unrealistic, that postponing reform is no longer an option. Completely suspending the Maastricht rules with the escape clause as a result of the Covid-19 episode, when many governments blew past all the deficit and debt stops, has further sealed this sentiment.

To assess options for reform, we need to understand the context of the Maastricht Rules and their link to fiscal sustainability. It makes no sense to reform the rules if this imperils sustainability. The 3/60 percent deficit/debt rules are derived from the ratio of the general government debt to nominal GDP. The stock of debt grows each year with the deficit (shrinks with a surplus). Nominal GDP grows each year with the nominal growth rate.

Governments aim to stabilize both the deficit and GDP growth rate within a narrow band, because large swings in these variables tend to undermine trust and confidence in economic policy making, lower welfare, and inhibit saving and investment for a prosperous future.

We can show mathematically that if the government deficit averages “def,” and if nominal GDP growth averages “y,” then the debt ratio D will approach, over time, a value D = def/y. In other words, if the deficits can be limited to 3 percent of GDP, and if nominal GDP growth is around 5 percent a year, then, over time, the debt ratio D = 3/5 = 0.60, or 60 percent of GDP. This is the mathematical logic of the original Maastricht Criteria.

A further interesting detail is that the 5 percent nominal growth rate can be thought of as 2 percent inflation (mandate of the ECB) and 3 percent real GDP growth.

Growth and inflation in the EU27 were higher than in Greece, in part, testament to the difficult euro crisis for Greece. Nominal GDP growth in the EU27 averaged 3.3 percent a year, well below the 5 percent assumed in the Maastricht Criteria. Following a period of above inflation and nominal GDP growth in Greece during the drachma period prior to 2000, the euro adoption and the structurally slowing economy, brought a nominal slowdown to average 2.4 percent a year for Greece—about half of the 5 percent assumed in the Maastricht Criteria.

Putting the numbers together, we see that the actual recorded debt ratio for the EU27, at end-2021, was 88.0 percent of GDP. This is substantially above the 60 percent limit, but consistent with the formula for debt motion as noted above. The debt limit was missed because the assumption for growth had been too optimistic.

EU economies, on average, and given the demographic developments of an aging and shrinking population, cannot grow at 3 percent in real terms. Alternatively, if nominal growth averaged 3.3 percent a year, and we aimed for a maximum debt ratio of 60 percent, then the tolerable maximum deficit would have been 2 percent, instead of 3 percent. Thus, given the growth record of the EU27 countries, the deficit definition of the Maastricht Criteria was too loose.

In Greece, the recorded debt at end-2021 was 193 percent of GDP. The formula gives us 285 percent of GDP. Is the formula incorrect? No, the formula is correct, but the massive debt write-offs that Greece received in the period 2011-2015 from the private sector and EU partner countries is not recorded as a “surplus” in the deficit numbers. The deficit numbers are based on “ongoing” fiscal operations, not including such one-time effects. Such an unusual operation is accounted for separately in the fiscal system as a “stock-flow discrepancy.”  Without the debt forgiveness, Greece’s debt would be around 285 percent of GDP.

The past is the past, and we cannot change it. But what do these findings imply about the future of the EU27, for Greece, and a possible reform of the Maastricht Criteria? Table 2 provides some data. 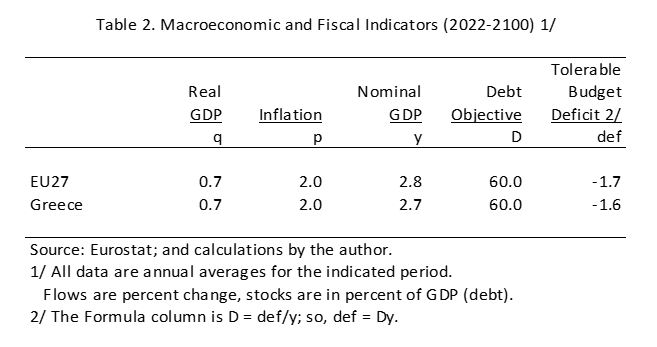 Based on the most likely demographic scenario by Eurostat through 2100, and with stable productivity growth per worker in each economy through 2100, we have calculated that potential real GDP growth in the EU27 and in Greece, are likely to be around ¾ percent a year on average (a baseline scenario).[1] We assume that the ECB will hold inflation at an average of 2 percent a year. Thus, nominal growth is anticipated to be around 2¾ percent a year on average for both the EU27 and for Greece (other EU members show more differentiated growth rates, based on each country’s demographic profile and productivity trends).

In the multiple discussions on reforming the Maastricht Criteria, one guideline that almost all analysts and commentators would like to maintain is the 60 percent debt-to-GDP ratio. This implies that with the nominal growth rates derived as above, and the 60 percent debt ratio objective maintained, we can calculate the maximum tolerable deficit over time, and on average for each country and for the EU27 as a whole. This is indicated in the last column of Table 2 as a maximum deficit for the EU27 as a whole of 1.7 percent of GDP, and for Greece of 1.6 percent of GDP (the difference reflects rounding).[2]

The analysis noted above found that each country has a different potential growth rate. If we want to maintain a common debt objective of 60 percent of GDP (in our view correct as a cautious guiding instrument), then each country will have a different ceiling for the deficit. Each country should then develop its own long-run fiscal sustainability plan that is consistent with its own growth potential.

As shown above, the one-deficit-rule-for-all has not worked well. It is unlikely to be practical in the future. Respecting sovereign countries as individually responsible for developing their own long run plan, peer reviewed by the full EU membership and the financial markets, cements ownership. Multiple complex adjustment rules should be scrapped, and bailout arrangements through the partner countries and the ECB (now standard practice) should be abolished, because each sovereign country will have assumed full responsibility for its own long-run stability. The EU27 is not, and cannot be, a bailout machine.

Several proposals by heads of state and political representatives of EU countries have advocated to relax the Maastricht Criteria, i.e. permitting higher deficits. The argument goes that aging, population decline, and the need for environmental spending will continue to put pressure on the country’s budgets, and therefore countries should be given more “fiscal space” for new spending and higher deficits.

The analysis above suggests that the Maastricht reforms should go in the opposite direction of what is now commonly proposed: the Maastricht deficit criterion needs to be effectively tightened in all countries’ long-run plans. We continuously overestimate countries’ growth potential. In a slowing GDP growth world, spending needs to be paid for, incrementally, with taxes and other revenue streams. It is mathematically inconsistent to relax the deficit rules and believe that the debt ratio somehow will take care of itself. That would do young generations a great disservice and it would be dishonest.

[1] The demographic and productivity calculations were done separately for each member state, and for the EU27 as a whole. Greece has faster population decline in the Eurostat baseline, but we assume that this will be compensated in part by gradual convergence of productivity growth to higher productivity countries over time.

[2] The full analysis of demographics, productivity, potential future growth, and reform ideas about deficits and debts, for the EU27 as a whole, and for each of the member countries, can be found in the book “The Macroeconomy of the EU27,” by Bob Traa, forthcoming later in 2022 and available from Amazon.com