You are at: Home / Agora / In the absence of light, darkness grows

Ten days have passed since the European Parliament elections and New Democracy’s top-ranking committee has just held a meeting to assess the poll results. One can only look upon the panel’s reported findings with incredulity. According to what has been leaked to the media, high-ranking New Democracy officials found that their party, which lost 7 percentage points compared to the June 2012 national elections, “held on to the majority of its support.” Also, SYRIZA, which lost just 0.3 percentage points of its backing compared to two years earlier, “has lost its momentum.” More significantly, though, New Democracy officials are said to have reached the conclusion that Golden Dawn has “reached its ceiling.”

Let’s examine the thinking behind this last statement. According to the leaks from the conservative camp, Golden Dawn is not on the rise because it failed to achieve the 16 percent its own MPs had claimed they would. It is worth remembering that these parliamentarians are the same fantasists that believe their party members are not involved in any violence and have a spokesman with a swastika tattoo who says he is not a Neo-Nazi. To judge success or failure against the standards set by a group of people that are delusional cannot pass as serious political analysis.

To make matters worse, the musings from the meeting of New Democracy’s executive secretariat also suggest that although Golden Dawn won about 95,000 votes more than it did in the 2012 elections, this proves that there is no swing in its favour. If we were to follow this logic, then what could we say about New Democracy, which lost more than 525,000 votes since June 2012? Even if we were to set all this aside, the implication in New Democracy’s position is that it is somehow acceptable for a violent, racist and antidemocratic party to be the third largest in Greece.

Clearly, New Democracy’s reading of the EU vote – or at least the version it wants to make public – is nonsense. This interpretation may be understandable as part of an effort to put a positive spin on the outcome of the May 25 ballot but it feeds into a worrying refusal by all the main parties to accept or discuss the most worrying aspect of the recent elections.

From May 26 it was business as usual: New Democracy, PASOK and SYRIZA all claimed electoral victory and dished out their hackneyed put downs. The two coalition parties devoted their post-election analysis to how SYRIZA had failed to increase its share of the vote from 2012. The opposition party focussed on how the governing partners had lost 11 percentage points in two years.

None of them devoted any attention to the parties that actually upped their support over the last two years. If they had, the conclusions they would have drawn might have elicited more than the usual platitudes.

Only three parties increased their vote share on May 25, all of them on the extremes of Greek politics. Neo-Nazi Golden Dawn went up from 6.9 percent to 9.4 percent, ultranationalist LAOS rose from 1.6 to 2.7 and the Communist Party (KKE) increased from 4.5 to 6.1. Without taking into account the minor parties on the far fringes of the political spectrum, this means that almost one in five (18.2 percent) voters backed these three parties.

Put another way, support for the extreme right (Golden Dawn and LAOS) far outstripped that for the centre-left  (12.1 percent vs 9.2). Should this not be a prime concern for Greece’s mainstream parties?

"What mistake have we made if a quarter of the electorate voted for absolutely not a right-wing party, but for a fascist, extremist party? This is a disaster," German Finance Minister Wolfgang Schaeuble said of Front National’s victory in France. Not a peep about Greece. But then why would he say something when Greece’s own leaders ignore the issue?

The May 25 result should have been a watershed moment, prompting Greece’s decision makers to seriously contemplate the mistakes that have fed the extremist monster: implementing drastic austerity while ignoring the social safety net, engaging in relentless artificial political polarisation, ignoring education, treating immigration with malevolent neglect, undermining institutions, snubbing justice and, when all else failed, attempting to cosy up to Golden Dawn and adopt some of its agenda.

This catalogue of failures has contributed to there being more neofascists than social democrats in Greece today. Those who vote for Golden Dawn and its less volatile sidekick, LAOS, can no longer be regarded as just frustrated citizens letting off steam. Nor can our understanding of what is going on in Greece rest on the theory that the far right’s rise is only a product of the crisis and part of a European trend. In fact, research suggests that unemployment has a limited impact on the extreme right’s popularity in Europe.

We have to start coming to terms with the fact that a sizeable percentage of the 536,910 Greeks that voted for Golden Dawn on May 25 did so in absolute knowledge of what their ballot represented. We must also accept that a large number of these people voted with smiles, not frowns, on their faces. Greece’s unique economic and social situation has released something very toxic into the air. It has enticed the extremists, Nazi sympathisers, fascism lovers, dictatorship worshippers and racists out of their hiding places. At first, they were wary of being out in the open. Now, with presence in the Greek and European parliaments secured, they can be brazen about their beliefs.

Last month, Pew Research's Global Attitudes survey suggested that anti-Jewish sentiment in Greece was by far the highest (47 percent) amont the seven European Union countries polled. It also indicated that a slight majority of Greeks have unfavorable views of Roma and Muslims. 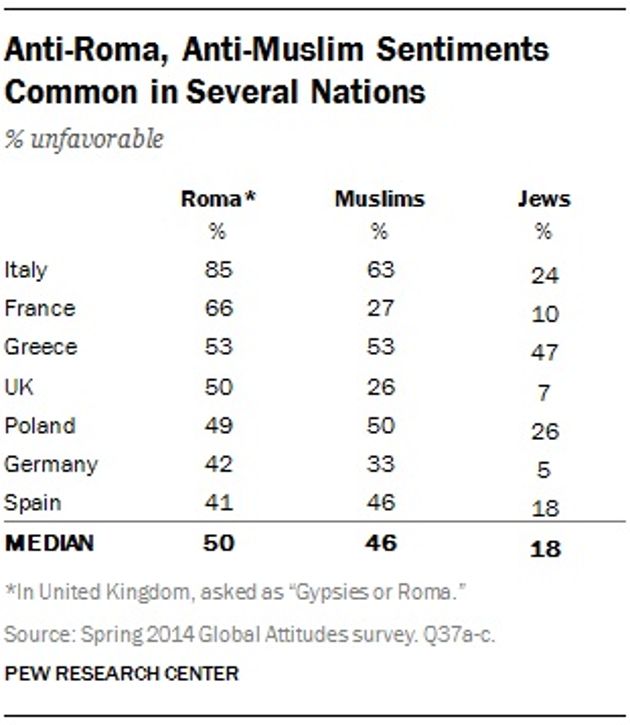 It should come as no surprise that in a country which in the last century has been through two fascist dictatorships, Nazi occupation and collaboration, and a civil war whose wounds never healed properly there should be those who long for authoritarian far-right rule. What is a surprise is how many of these people there are in Greece. For decades, though, they were mollified by PASOK’s ersatz nationalism and New Democracy’s pompous patriotism. They were pulled along by the relentless rush towards the west, Europe and prosperity. Now that much of this has proved to be a facade, there is nothing holding them back from returning to their roots.

Well, there would be if Greece’s democratic parties were willing to accept and then tackle the issue by addressing education and welfare policies, strengthening institutions, purging the police, restoring faith in the justice system and conducting themselves with some political decorum. But how can they do this if they refuse to even acknowledge that the problem exists? By failing to cast a light, they are allowing darkness to grow. This is how we end up - as we did on Wednesday - with Golden Dawn’s version of the Nazi Party’s Horst Wessel Song being played outside Greek Parliament and its supporters wandering through the building’s corridors as if it was a Munich beer hall in 1923. How shameful.