You are at: Home / Agora / How many NPLs in the Greek banking sector are also non-recoverable loans ?

On the positive side of their balance sheets, the four banks reported increasing interest income, improved cost-cutting measures and a higher depositor base. Clouding these successes was an inconvenient item in the reporting season that concerns the dynamics of non-performing loan (NPLs) formation.

NPL* Formation in Greece during first six months of 2014

*NPLs are defined as overdue for at least 90 days

Concerning their operations in Greece, all four systemic banks had to address the fact that NPLs continued to increase in the second quarter compared to the first three months of 2014. While the increases are slowing down when compared to previous quarterly results, the NPL dynamic still does not appear to have reached its peak.

Only one bank (NBG) reported the level of NPLs below the critical threshold of 30 percent of its total loan portfolio. In contrast, Piraeus Bank now posts a rather unwelcome leadership position in this balance sheet category, with NPLs reaching a staggering 38.8 percent during the first six months of 2014.

The NPL challenge on Greek banks’ balance sheets requires substantial amounts of provisioning. This binds liquidity and capital which cannot be made available for lending to the real economy. Note that lending to private households and corporates continues its uninterrupted three-year declining trend curve, reaching -3.7 percent in July 2014. 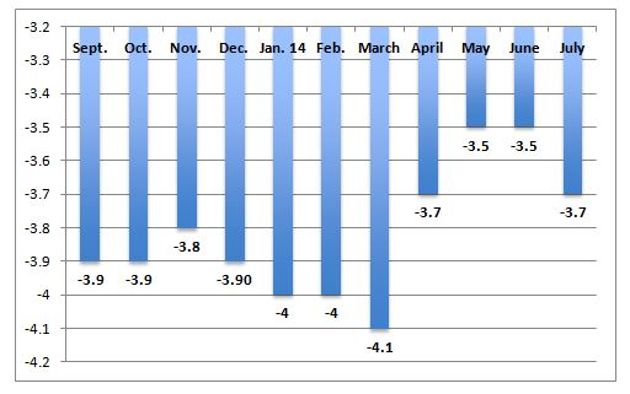 While the NPL problem is a key impediment for Greek banks to resume their essential task of providing affordable and timely liquidity to the domestic economy, their neighbouring peers in Cyprus face an even taller mountain to climb. In Cyprus approximately 45 percent of total loans extended by local banks are currently classified as NPLs - the highest in Europe.

The focus on NPL levels and their growth dynamics on banks’ balance sheets is important in its own right. But this attention is only part of the whole story. NPLs have been growing uninterrupted in Greece for more than three years.

The manner in which they are reported in quarterly conference calls to domestic and international investors fails to focus on a challenging follow-up question: How many of these NPLs are in fact non-recoverable loans (NCLs)? Put otherwise, since NPLs continue to grow in the Greek real economy how do they impact on potential write-downs or write-offs by banks?

Data about the ratio between NPLs and NCLs is not available from the information provided by Greek banks. NCLs concern borrowers (private households and corporates) that are seriously late (more than six months) with their repayment obligations (interest and principal). Banks’ efforts to regain the loan may also be blocked through lengthy court proceedings.

Many of the NPLs concern zombie companies and over-indebted households where the chance of any recovery is close to zero. Given their low-to-non-existing asset quality these clients of banks are not in a position to make any repayments in the near future. Nor do they have the credit score necessary to refinance or restructure their existing loan commitments.

In consequence, these NPLs must be classified as non-recoverable by banks. But we do not know how the dynamics between NPL formation and NCL levels currently stands among domestic lenders. On banks’ balance sheets there is no distinction between NPLs and NCLs. In their loan portfolios the accounting assumption continues to be that their value is 100 per cent recoverable.

In other words, presenting a transparent NCL overview would oblige Greek banks to address one of the most delicate issues, namely what level of write-downs and/or write-offs do they have to factor into their balance sheet calculations.

Admittedly, taking a charge of millions of euros to write down, or even worse, having to write off Greek banks’ investments in their troubled loan portfolio is a high-risk strategy. Any write-off would severely impact on domestic lenders’ quarterly profit outlook for the rest of 2014 and in 2015.

But this is an issue worth addressing and requiring further illumination. As the European Central Bank’s combined asset quality review and stress tests get under way, additional information on the quality of NPLs is warranted. Moreover, failure to shed light on the thorny issue of non-recoverable loans risks diminishing the credibility of domestic lenders and the substance of the asset quality review.