You are at: Home / Agora / The politics of debt dynamics in Greece

As a procession of government and opposition representatives met Greek President Karolos Papoulias in the course of last week, one issue was brought to public attention that could be termed the taboo topic amid all the memorandum exit debates. Fotis Kouvelis, leader of the Democratic Left party, had the audacity to suggest that the issue of Greece’s mounting public debt obligations merits the formation of a common negotiation stance by the democratic parties vis-à-vis its international creditors.

The potential of the economic recovery in Greece will be determined by the country’s capacity to manage its sovereign debt dynamics. For 2014 the Greek government expects a debt-to-GDP ratio for Greece of 174.8 percent or a total of 318.6 billion euros. The revised projection of the IMF is slightly lower (see below). In both cases, the forecast volume for this year would again surpass the sovereign debt levels attained in 2011, i.e. before the two debt restructuring operations of 2012.[1] 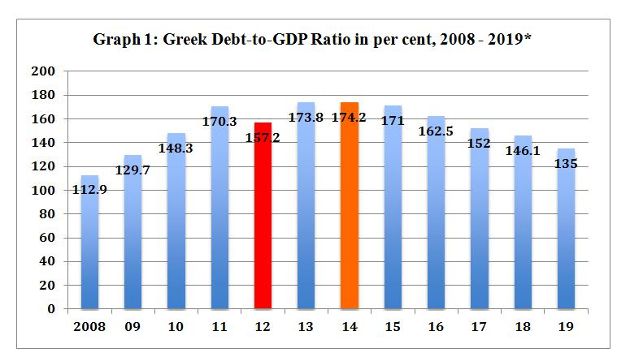 The focus on debt dynamics instead of the total volume of accumulated sovereign debt is critical in this respect. We need to emphasise the trend and not the overall total number. The increase in the ratio of Greek public debt to pre-restructuring levels in 2012 is a matter of concern if the economic recovery turns out to be feeble and uneven for a prolonged period of time.

The single most important factor impacting on the recurring rise in Greece’s debt ratio has been the dramatic fall in nominal GDP, i.e. the euro value of the country’s economic output since mid-2008. Only if and when nominal GDP rises faster than the debt increase (in percentage terms) can we expect Greece to be able to avoid or exit this dangerous indebtedness trap. 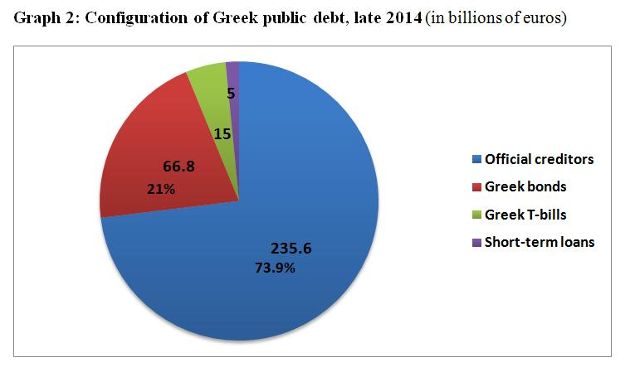 Source: Data is from the draft budget for 2015 submitted by the Greek government to parliament in October 2014. Data on the share of outstanding Greek bonds being held by the ECB as a result of its secondary market purchases of sovereign debt in 2011/12 is not made publically available by the ECB.

Today approximately 83 percent of Greece’s debt obligations are held in the portfolios and budgets of various official creditors. In mid-2014 the official sector, i.e. eurozone member states, the ECB, IMF, the European Financial Stability Facility (EFSF) and the European Stability Mechanism (ESM) were the key guarantors of Greece’s sovereign debt.

This liability exposure of official creditors is the result of an unprecedented debt migration from the private sector to public institutions since 2011. The reprofiling of Greece’s sovereign obligations makes any future debt restructuring an exercise that would almost entirely impact the official sector of Greece’s international creditors. Among these creditors, European institutions such as the ECB, the EFSF and eurozone member states would be affected most prominently.

Greece’s second (2011) macro economic adjustment programme with the troika includes a provision according to which the country’s debt mountain has to be reduced to 124 percent of GDP by 2020. Greece has a moratorium on the interest payments on this debt for 10 years after the European part of the adjustment programme expires end-2014. Furthermore, the average maturity of the European loans is currently 32 years and at a rock bottom interest rate of 1.5 percent.[2]

Despite these favourable parameters, there are also serious doubts about Greece’s capacity to service its accumulated debt and meet these numerical objectives. After six uninterrupted years of recession, the economy’s growth potential may be too weakened to generate the levels of GDP necessary to achieve such ambitious debt-to-GDP targets. The projections by the European Commission provide for an economic recovery reaching 0.6 percent this year and a rate of growth of 2.9 percent in 2015.

We should also take into account that it is by no means self-evident that Greece will be able to achieve a primary surplus (before interest payments) in its central budget every year, preferably with an ever-increasing volume. Bringing the debt volume down to sustainable levels by stretching the repayment timetable from over 30 years to 50 years implies burdening the next generation with a major liability for which they are not responsible.

Moreover, the politics of debt dynamics have to be considered. SYRIZA, the main opposition party, has announced that, in the event of it leading a government in 2015, it would seek a profound turn of policy direction. SYRIZA would not only reject further budget austerity and fundamentally reverse the working arrangements with the troika; it would also call for an international debt conference for eurozone countries, starting with negotiations about debt relief for

Greece. The blueprint for such a conference is the agreement reached in 1953 in London on the occasion of an international debt relief conference for then West Germany. The networking activities of SYRIZA leader Alexis Tsipras across European cities in recent months also help him establish if there is enough critical mass among other representatives and parties to advocate such an international debt conference and build coalitions for it accordingly. One party in Spain, the newly created Podemos, has already voiced support for such a conference call.

Finally, we cannot exclude that headwinds are coming Greece’s way that could adversely impact on the economy’s recovery potential in 2015 and thus also weigh on the country’s debt dynamics. One factor to bear in mind is the economic impact of the sanctions against and counter sanctions by Russia because of the Ukraine crisis, for example in agriculture exports to and tourism arrivals from Russia. Another concern is continued stagnation in the eurozone, in particular among Greece’s most important trading partners, i.e. France, Italy and Germany.

Equally, political risk factors on the home front continue to take centre stage. That was why the defilé of government and opposition representatives meeting President Papoulias in the course of last week took place. The consultations moved issues onto the agenda of the Greek political economy whose proposed solutions are complex, controversial and being closely watched by international observers.

This article was published in last week's electronic newsletter, which subscribers can receive via e-mail or mobile app. The apps can be downloaded for free at the App Store and Google Play.

[1] This arrangement does not apply to the IMF. Greece has to repay the Washington-based lender within 10 years after the IMF part of the second macro economic adjustment programme expires in the second quarter of 2016.

[2] The Greek government’s 2014 debt projections are included in the recently tabled 2015 draft budget.