You are at: Home / Agora / Greek DSA: Don't Say Anything about the debt

After 100 days wasted by all participants on issues of minor significance, political symbolism or for domestic political consumption, it was reassuring to know that not all attention on substance had been lost.

Greece's debt sustainability analysis, a task fully owned by the IMF, has not been formally touched since the last review in June 2014, where in Annex I there is an extensive analysis of the country’s debt profile based on the assumptions of the review that was completed around this time last year and the last disbursements that Greece has received from the troika were approved.

The main parameters of the DSA remain intact as they were presented in the November 2012 agreement. It assumes sizable primary budget surpluses that would double to 3 percent of GDP in 2015 from 1.5 percent in 2014, and remain above 4 percent of GDP until 2022. Dynamic nominal growth is seen reaching 4.9 percent in 2016 and 5.4 percent in 2019. There is a forecast for high privatization proceeds that exceed 1 percent of GDP each year until 2020, peaking at 1.7 percent of GDP in 2016, combined with other residual factors such as SMP and ANFA profits that return to Greece and the deferred interest payments to the EFSF loans.

The large primary surpluses and the growth assumptions have the lion's share in the cumulative effect of debt reduction in the period to 2022.

In an almost prophetic manner, the IMF stresses that shocks on those two variables can have a major impact on Greece's debt profile and its sustainability.

"Looking forward, growth projections are more optimistic than consensus and staff expects positive growth starting in 2014," says the Fund. "But maintaining the program primary surplus of about 4 percent of GDP for several years may yet prove difficult."

In an attempt to assess the impact of the new political and economic reality in Greece, we plugged the IMF's assumptions and calculations for Greece's debt sustainability analysis into a spreadsheet and we stress tested each of the variables either based on facts that have materialised, such as lower primary surplus in 2014 and higher debt in the end of 2014, or changes that have been reported or presented in proposals by the Greek government and appear to have been broadly agreed with Greece's lenders, like the lower target of primary surpluses starting from this year.

Then we present a combined impact on the baseline scenario, which consists of permanently lower primary surpluses, more modest growth and lower privatization proceeds while leaving residual debt flows untouched.

For all scenarios the assumptions for 2014 have been revised to capture the significantly lower primary surplus of 0.3 percent of GDP vs the 1.5 percent that is included in the latest DSA. Additionally, as a result of higher short-term borrowing, the debt stock last year closed at 177.1 percent of GDP as opposed to the 174.2 percent assumption in the DSA. 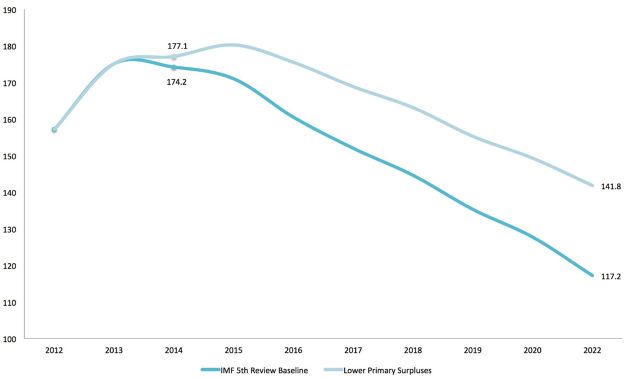 The downward revision of growth rates, with a major scaling back of growth projections this year as a result of the political instability since September last year and the economic uncertainty this year since SYRIZA came to power, has a significant impact on the debt trajectory. The European Commission revised 2015 growth to a marginal 0.5 percent and to 2.9 percent for 2016. On the assumption of no further political shocks, a return of investments and strong, mostly tourism-led, services exports that would keep growth permanently at 3.5 percent each year between 2017 and 2022, our calculations put the stock of debt at the end of this period at 138 percent of GDP. 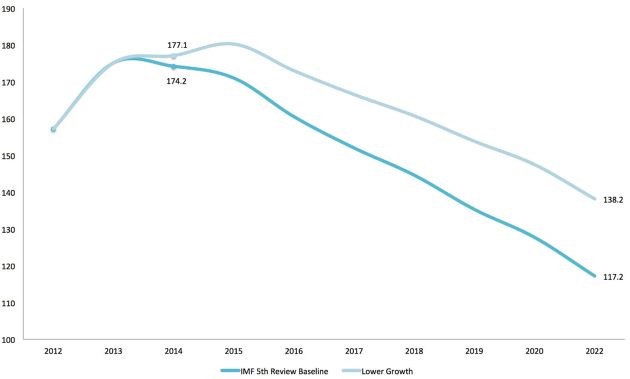 Privatisations, and the management of public assets in general, are areas where SYRIZA’s ideological beliefs mean it will struggle to deliver the high revenues incorporated in the current DSA, which assumes asset sell offs of as much as 1.7 percent of GDP in 2016. SYRIZA is more in favour of concessions or transactions in which the state keeps majority stake rather than outright sales. It also holds the view that proceeds from asset management cannot purely be earmarked for debt reduction but should have a more supportive role on the fiscal side and most notably on social benefits or other current transfers. A reduction of the privatization proceeds assumptions that will not exceed 1 percent of GDP for debt purposes would bring the debt stock to over 130 percent in 2022. 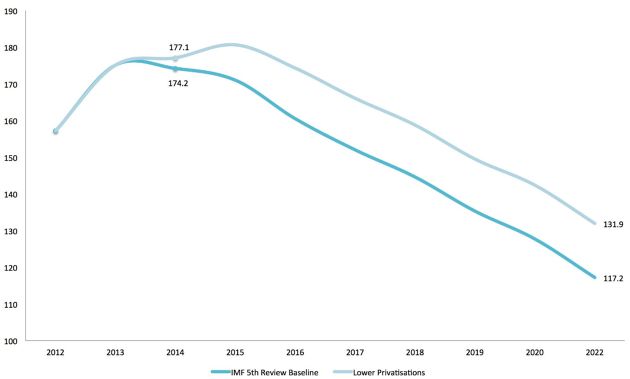 Combining the effects of the revisions to the different variables, our calculations find that the new political and economic reality in Greece has a major impact on the country's debt profile.

Greece has been off track since the last quarter of 2014. The country will barely grow this year and even next year it is expected to rebound modestly as the wounds from the latest political upheaval will gradually heal. There seems to be a general understanding that the pretence of Greece being able to deliver budget surpluses of such magnitude for a decade should be abandoned. Equally, fire sales of dubious benefits are not seen as the only solution for optimal public asset management.

The combined effect of this new reality could very well take Greece's debt as high as over 150 percent of GDP by 2022, bringing back to the table the most awkward topic for all participants. 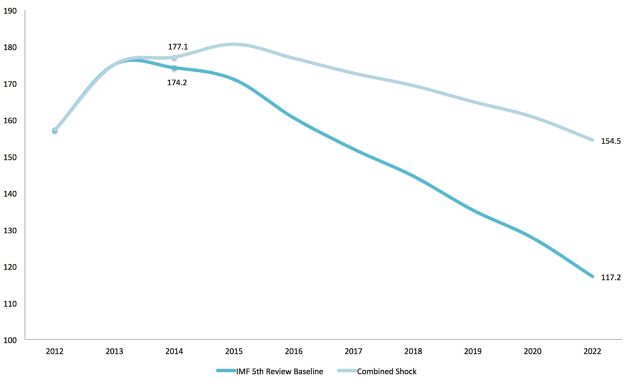 The assumptions that were set out at the end of 2012 and were maintained in subsequent revisions were so fragile – as the IMF admitted - that it only took a just a few months and some doses of political instability before everything was thrown off track.

It will probably be convenient to blame the political change in Greece for lenders having to go back to the drawing board on the issue they have repeatedly tried to dodge since Day 1 of the Greek crisis. However, solid economic recoveries based on strong fundamentals should not scatter all over the place like dry leaves with the first gust of wind.

On May 9 five years ago, the IMF's board met to approve the first Greek programme. In the minutes that were made public several chairs criticised the programme for unrealistic assumptions about its economic impact, the absence of an upfront debt restructuring that protected European private bondholders and the violation of the rule of supplying fund loans only on the condition that there is a high probability the debt is sustainable.

In a recently published forensic paper by Paul Blustein on the role of the IMF in the first Greek programme, there is extensive background on the politically motivated decisions of the IMF management to bend its rules and stretch logic to be part of what was seen as a European, rather than a Greek bailout.

Each time during these five tumultuous years for Greece that wishful thinking and arbitrary assumptions were put to the test, they naturally fell short. The only certainties are the economic and social devastation that the unprecedented austerity has brought to the country.

At every critical juncture the debt issue comes back to torment those that decided to shift the burden of the crisis management solely on the shoulders of Greece, until the eurozone had the mechanisms in place to safeguard the euro.

SYRIZA also carries the huge responsibility to make good on its pre-election pledge to deal with the debt pile. This will not happen by burning every single bridge, losing allies or wasting time, effort and political capital on issues of minor significance and logistics.