You are at: Home / Agora / A Greek proposal that deserves to be heard

Alexis Tsipras’s government had many people scratching their heads and some say even officials fuming with its approach and negotiating tactics since it came to power. It was evident from the very start that time would be against SYRIZA, and inconclusive as well as confrontational negotiations would fuel uncertainty, stretching the budget, draining liquidity, accelerating deposits flight and sinking the economy back into recession. But Tsipras and his ministers acted like it was actually working in their favour, allowing time to slip, spent on endeavors of dubious or rather symbolic significance.

What seemed like a tremendous effort during the government’s first four weeks in office was invested to change the name of the “troika” to the “institutions.” Over eight weeks were devoted to work out logistics for meetings and concluded in simply re-branding the process as the “Brussels Group” and relocating the technical work meetings. The government spent a considerable amount of time pretending that it was no longer under the lingering second programme and that the memorandum era ended with the February 20 Eurogroup agreement. By the end of April at the Riga Eurogroup, Greek Finance Minister Yanis Varoufakis came under attack from his counterparts, seemingly frustrated by the lack of progress.

In this bitter atmosphere of the last three months, the debt management proposal that the Greek Finance Ministry submitted last week along with its latest list of fiscal measures was probably the most sensible piece of work that has been produced.

Although it has not been admitted publicly, every stakeholder in the Greek affair, including Tsipras himself, must be aware that Greece will not miraculously regain market access in the short-term and start servicing its debt obligations on its own. A third programme will be required and the key question is whether this new arrangement will actually be a repeat of the fraught self-defeating process or will indeed alter course and give the country a chance to change its fortunes.

Greece’s privately held debt was taken care of with the 2012 PSI. There are few of the new bonds issued left in the market and Greece will not start having to pay the principal for another decade. EFSF loans have an average maturity of over 30 years and the bilateral loans from eurozone countries, minus Slovakia, that were part of the first programme are not to be repaid before 2020.

It is the maturities of the bonds held by the European Central Bank and repayments to the International Monetary Fund that create a major funding hump of around 24 billion euros over the next three years. In similar fashion to the debt buy-back that took place in December 2012, the Greek government is proposing a combined financing solution that aims to significantly reduce its funding needs in the mid-term and help Greece regain market access through eligibility for the ECB’s quantitative easing (QE) programme. 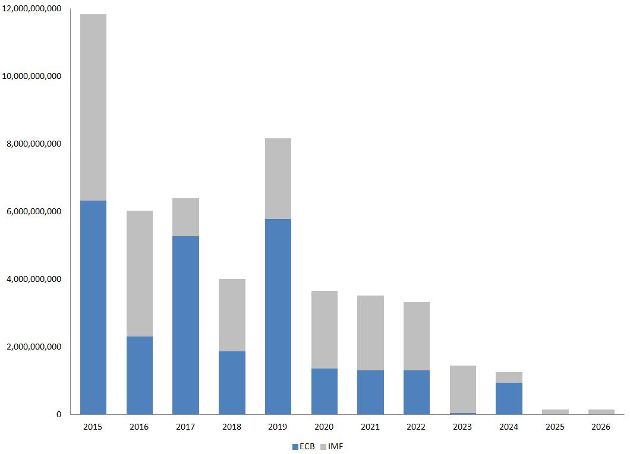 Using European Stability Mechanism funding (the third programme) Greece would buy back all the remaining SMP bonds held by the ECB, which have a face value of 27 billion euros. This would not only reduce by 13 billion euros the country’s funding needs until the end of 2017, it would also allow Greece to benefit from QE as it would no longer be above the country threshold set by the ECB and would qualify for the full QE allotment.

The profits from the total SMP holdings are estimated at around 9 billion euros. Greece is proposing to use this lump sum for early repayment of parts of the IMF obligations, which currently stand at around 20 billion. Of this, 9 billion euros are outstanding from the first programme and 11.6 billion from the second.

The proposal has a number of merits when seen on a logical basis and not driven by emotion or prejudice.

Most importantly, the scheme is fully compliant with treaties and the institutions’ regulations. It does not suggest to rollover any maturities which the ECB - albeit selectively in the case of Greece - considers monetary financing. The ECB would be repaid on face value in full (just upfront) and follows the established procedure of profits return, just for the entire SMP holdings. The IMF has not only already accepted such an early repayment arrangement for Ireland and Portugal but managing director Christine Lagarde actually publicly praised Portugal. "It is with great joy that we consent to payment in advance, which shows that Portugal is doing much better," she said.

The exercise is not debt relief, a notion that at this stage appears to be anathema for Greece’s eurozone partners. It is a refinancing exercise that will take short-term debt obligations and stretch them into much longer term ESM obligations, effectively clearing Greece’s debt horizon and leaving only the few holdouts from the PSI as obligations in the near term.

This will lead to a sizeable reduction to the interest bill as (despite the SMP profits being eventually returned) Greece needs to make the regular interest payments to the ECB. The process will also produce savings from the interest bill to the IMF since it will essentially lead to the entire amount disbursed by the Fund as part of the Stand-By Arrangement being paid back.

It is a third programme so this will require Greece to comply with certain conditions, even at a minimum to meet the agreed terms of the current review, commit to a mid-term fiscal strategy with targets set for the next four years.

It removes the oppressive process of negotiating each tranche disbursal and the drama that comes with that. On more than one occasion, Greece’s lenders have said that they want Athens to deal with its own problems and that they will take care of the debt as long as Greek governments do their own housekeeping. This proposed arrangement does exactly that. Greece will have to meet fiscal targets that will cover state expenses and a large part of the debt servicing costs.

And, ultimately, with the dust settled and with QE eligibility the country will gradually stand on its own feet and start covering its own debt obligations and dues to the IMF from the second programme, which are payable from 2017.

Without a shred of a doubt the proposal that is on the table is worth serious consideration and can be a game changer. Key decision-makers just need to remove the sentiment and give it a chance based on logic. It is in everyone's interest to see Greece recover.