You are at: Home / Agora / Greece: After a deal, work on a solution

The current negotiations between Greece and its creditors are entering the final stages – cue the involvement of Angela Merkel and François Hollande. The positions are still far apart – mostly on labour market and pension reforms that not only Syriza but also the previous Greek government refused to implement. The crucial deadline is now June 30th, when Greece promises to pay €1.6 billion to the IMF, after bundling repayments at the end of the month, followed by a €3.4 billion repayment to the ECB in July.

A deal on these reforms and fiscal targets will probably be reached in the end: neither Alexis Tsipras and Syriza, nor Merkel and the eurozone have an interest in Grexit. However, a deal will be a short-term fix rather than a long-term solution. Instead, Greece must formulate a long-term, cross-party package that addresses its institutional problems and is supported across Greek civil society. The creditors, on the other hand, need to back such a long-term plan, and put more sensible fiscal targets and debt relief on the table. If both come together, we may move toward a solution, not just a deal.

The politics of a deal

The key political question is: can Tsipras, Merkel and the leaders of other wary eurozone governments sell a deal to their own parliaments and electorates?

If Syriza were to reject a deal along the lines currently discussed, the party would probably split, opening the way for new elections, and excluding the more radical part of Syriza from power. While the polls currently suggest that Syriza has a comfortable lead, the consequences of rejecting a deal – which could result in bank closures and capital controls –might convince voters to give more moderate voices another chance. After all, polls still suggest that a majority of Greeks want to keep the euro, and want a deal in the end. Syriza is therefore likely to back Tsipras when he decides to put a deal to a vote.

Merkel frets about the wider risks of Grexit – the stability of the euro, the EU’s standing, but also the geopolitical implications of weakening a state at Europe’s crucial south-eastern border. She will not let it happen unless something forces her hand. Could that something be her finance minister, Wolfgang Schäuble, alongside CDU rebels? The answer has to be no: reports of a Schäuble-Merkel split are overblown. Schäuble can play the hawkish finance minister, which boosts his domestic popularity, because he knows that Merkel will step in to broker the compromise needed to prevent Grexit. The CDU is with reason dubbed the Kanzlerwahlverein – the “Chancellor’s supporters’ club” – by the German press. In the end, they will back Merkel, minus a few rebels. Other eurozone countries will probably agree if Germany agrees, as they either tend to align with Germany, such as Finland, or have a less hawkish stance than Germany, such as France and Italy. For Portugal and Spain, it is important that the deal is not seen as an easy way out for Greece, as the governments in Lisbon and Madrid, which both have pushed through harsh adjustments and reform packages, are up for re-elections later this year.

The economics of a deal

The most controversial issues in the negotiations are labour market and pension reforms, and the pace of fiscal consolidation. Greece has liberalised its labour market considerably since 2011, and it is now more flexible than Germany’s, according to the OECD. Partly as a result, Greek labour costs and prices have fallen considerably (see Chart 1). And yet, exports other than tourism have largely failed to grow – contrary to those of other countries in southern Europe. Labour market inflexibility is thus unlikely to be holding back the Greek economy. 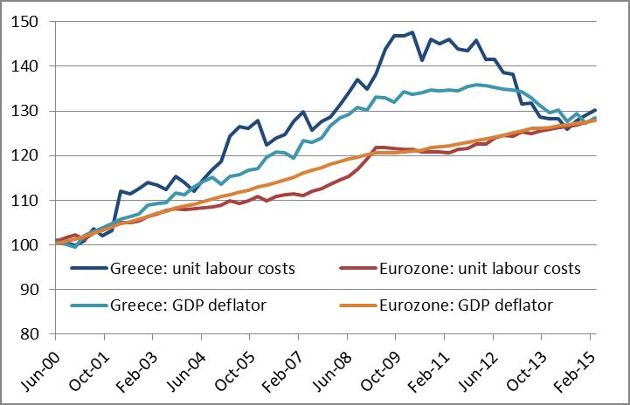 Source: Eurostat, Haver
Notes: Q1 2000 = 100. Unit labour costs measure labour costs per unit of output; the GDP deflator is a price index for the whole economy, not just consumption, as measured by the consumer price index.

The formerly very generous Greek pension system has already been substantially reformed. Further adjustments are necessary, but mainly because pension funds lost assets in the 2012 restructuring of Greek public debt, and the economy has collapsed, depriving the system of revenues. To make the system sustainable in the long term, further adjustments will have to be made, even more so with the recent court ruling against part of the cuts. However, the key to making the pension system sustainable is economic growth, not more cuts in entitlements. The political capital that could be wasted on another pension reform – with 45 per cent of pensioners already below the poverty line – would be better spent on measures to promote growth and employment.

The fiscal adjustment of Greece has been massive. The IMF calculates that spending cutbacks and tax increases amounted to 16.5 per cent of GDP between 2008 and 2013, roughly twice as much as Portugal or Ireland. The impact on the Greek economy has been devastating, increasing rather than decreasing the ratio of public debt to GDP. That the creditors still argue, despite overwhelming evidence to the contrary, that fiscal consolidation in an economic crisis reduces debt levels can only be explained by their huge investment in this false narrative. EvenSweden failed to consolidate its public finances in the early 1990s before economic growth resumed. The focus on fiscal consolidation in Greece is economically misguided.

What stands between Greece and prosperity is not another labour reform or wage cuts to make the economy more ‘competitive’, nor further fiscal consolidation or a pension reform to instil confidence in investors. The real issues are deeper than that. In order to unlock the potential of Greece, its entrepreneurial skills and underused natural resources, Greece needs to improve the institutions that govern its economy.

First, Greece needs to reform its public bureaucracy, which has been opaque, inefficient, and clientelistic for decades. Successive reform attempts have largely failed, and the Greek public bureaucracy remains subject to heavy political influence. Since the crisis, Greece has made some progress, for example in tackling corruption, but the momentum for change was fading even before Syriza came to power. The problem is that institutional reform cannot happen without broad support from Greek society, politicians and bureaucrats themselves – and even then it will not happen easily, and take time.

Second, Greece needs decisive reform to its judicial system. A functioning legal system is at the heart of a market economy; it benefits entrepreneurs, investors, exporters, and lowers inequality. It currently takes 1,580 days to enforce a contract in Greece, according to the World Bank’s ’ease of doing business’ survey (the OECD average is 540 days). This places Greece 155th of 189 countries in the world, right alongside Chad, Pakistan and Italy. The broader rule of law index of the World Justice Project puts Greece at the bottom of high income countries, just above Russia. Justice reform usually takes a long time, and hence needs broad political and public support to be sustainable.

Third, Greece needs to cut unnecessary regulation and state involvement in product markets. Regulation serves the purpose of making product markets work better and minimising legal costs, but can also enable incumbents to stifle competition. The regulated therefore have an incentive to influence policy-makers to tweak regulation in their favour. State control of the economy, while useful in some areas, needs to be limited for the same reason: price controls and state companies are potential breeding grounds for clientelism. Greece uses more product market restrictions and state control of the economy than other eurozone countries, according to the OECD, although it should be noted that it has made progress in recent years and is now where Germany was in the not-so-distant past (see Chart 2). The OECD has compiled a list of 329 recommendations to improve competition in various Greek sectors, and those recommendations are part of the current negotiations. However, such liberalisation could prove short-lived if not complemented by judicial and bureaucracy reform. 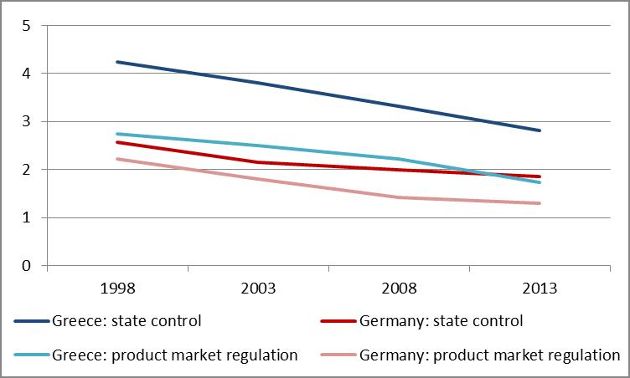 Tackling these problems will take Greek ideas, Greek resolve, Greek perseverance – and not outside pressure. Support for reform will always be grudging if it is done at the barrel of a gun. Greek civil society and a broad coalition of political parties need to join forces and agree on a package to change these institutions sustainably, such that it is implemented regardless of the outcomes of future elections. The progress of the reform process should not be monitored by an outside actor, micromanaging Greek policies, but by a council consisting of Greek experts, Greek civil society and media, and the major political parties in parliament. Only with full ownership of the reform process can the institutions of the country be reformed.

If Greece puts together such a cross-party council and programme, the creditors should embrace it enthusiastically – and offer support in the form of less restrictive fiscal targets and the explicit and binding promise of debt relief upon the successful implementation of such a genuinely Greek package. At the very least, Greece needs fiscal policy to be neutral: that is, neither expansionary nor contractionary. Ideally, fiscal policy would be expansionary until the economy has recovered its lost output and unemployment has come down sharply. Fiscal policy is also the reason why debt relief matters: not only would a lower debt level reduce the need for further consolidation under the eurozone’s fiscal rules; lower debt levels would also increase the shock absorption capacity of the Greek economy in a future downturn by enabling the Greek government to avoid the pro-cyclical fiscal policies that it was forced to implement over the last five years.

Of course, Greece would need time to put such a package together, which is why a short-term deal at the current juncture seems necessary. After the deal, however, Greece and its creditors should start working on a solution, not just a deal.

*Christian Odendahl is chief economist at the Centre for European Reform. This piece was first published on the CER’s website.