You are at: Home / Agora / Taking a macro snapshot

“Seems to be this assumption that if you accurately report that the data is getting better (in Greece) you’re Olli Rehn”, said to me the other day someone whose opinion I regard highly and got me thinking. The comment coincided with the successful conclusion of the troika’s inspection last week which was followed by a wave of positive publicity efforts by the Greek government which even included Prime Minister Samaras addressing the nation.

What follows is a handful of charts of some of Greece’s main macroeconomic indicators and surveys that give a snapshot of the current state of the economy. The shaded area in the charts represents May and June 2012 when the country’s place in the eurozone never looked more precarious from a combination of domestic and foreign factors and players. What followed was a period of intense negotiations with the troika that concluded in the end of November last year. In effect, Greece had a period of relative calmness just in the last four months. 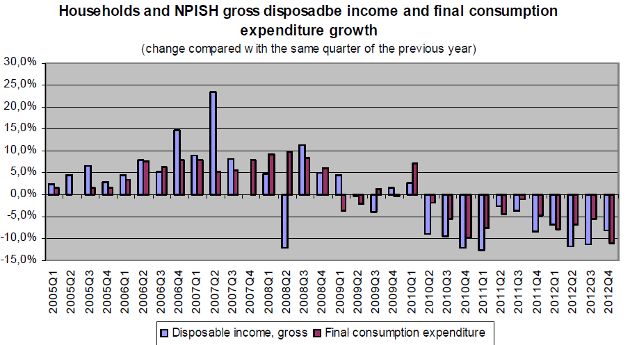 Most people are familiar with the 27,2% unemployment figure in Greece. Not so widely known is the figure of 17% of Greece’s labour force being unemployed for more than one year, without unemployment benefits and medical coverage. A figure of 17% even for total unemployment is depressing enough, the figure that represents over 800’000 Greeks out of a job for more than a year at risk of losing contact with the labour market is devastating. Alarmingly, the modest economic recovery that the troika expects in 2014 will not be enough to get people back into employment with the unemployment rate seen unchanged in the region of 27%. 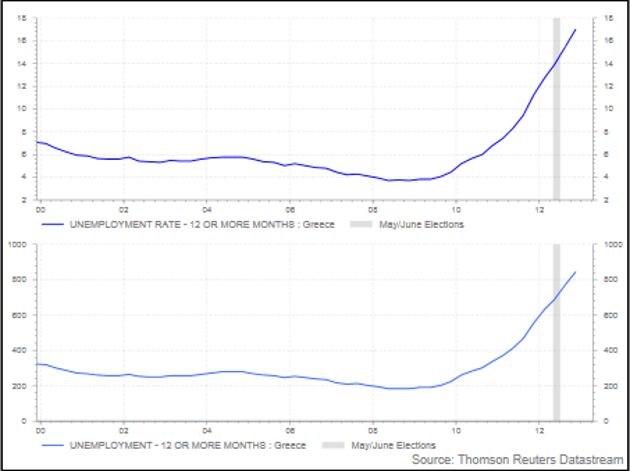 The Greek manufacturing PMI recorded in March the forty-third (43) straight sub-50 reading, at 42.1 from 43 in February. The PMI is marginally higher than the May and June 2012 period, orders are at the same levels, both indices have rebounded from the lows of early 2012 . Here is Markit’s reading of the situation:

"After rising in the opening two months of the year, the headline PMI dipped in March, largely reflecting faster declines in both output and new orders. Firms reacted abruptly to the accelerated downturn, cutting staff numbers as well as inventories of preand post-production goods at quicker rates than those seen in February. Some relief was meanwhile provided to businesses in the form of a drop in cost inflation to only a marginal rate, though margins remained under considerable pressure due to further declines in factory gate prices. Eyes now turn to next month’s release for an early insight into whether developments in nearby Cyprus have impacted on business and consumer confidence, and more precisely how this has in turn affected demand across the manufacturing economy." 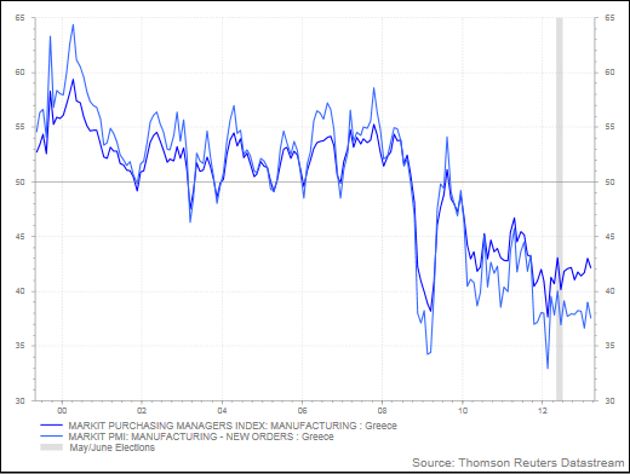 Consumer confidence has improved from the lows of late 2011 and early 2012. After a decline during the period of negotiations with the troika, confidence has returned roughly to the same level as the elections period last year. 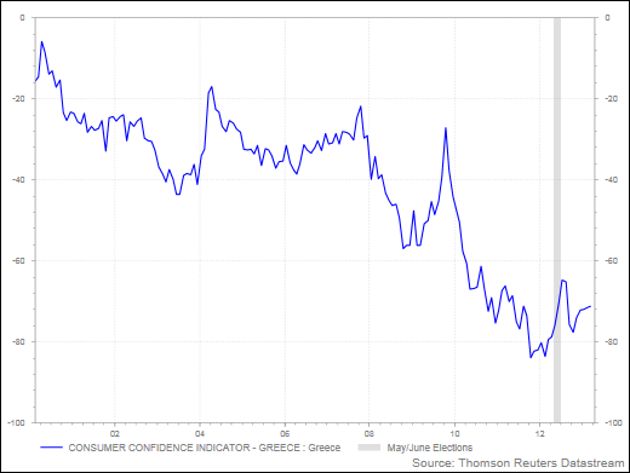 Economic sentiment has recorded a remarkable recovery since June last year and the formation of the coalition government that put aside any debate over Greece’s euro membership. 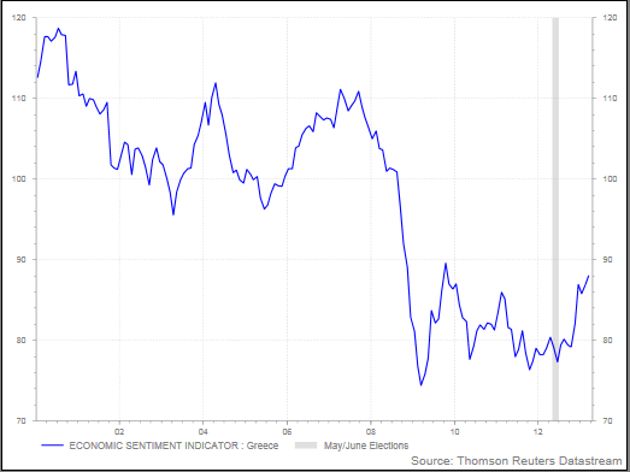 The doubt over Greece’s future in the euro led to a sharp drop in deposits that peaked between the two elections last year. Removing this uncertainty helped reverse the trend as deposits started returning to banks. The trend is not reversed in the much needed liquidity that the cash starved Greek economy needs. Credit remains on the decline from a combination of factors including the still incomplete recapitalisation of the Greeks banks. 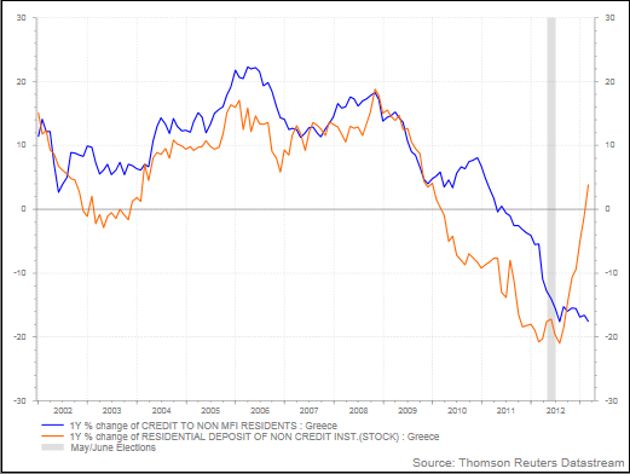 Many of the above mentioned indicators are heavily reflecting on retail trade which is steadily declining at double digits speed, with the drops even sharper than during the elections period. 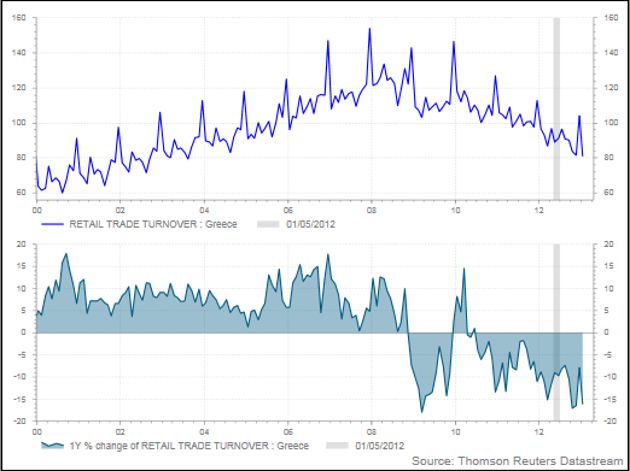 Industrial production – although the decline has decelerated from 2011 – is still on the decline and after two positive readings following the elections is back on negative territory. 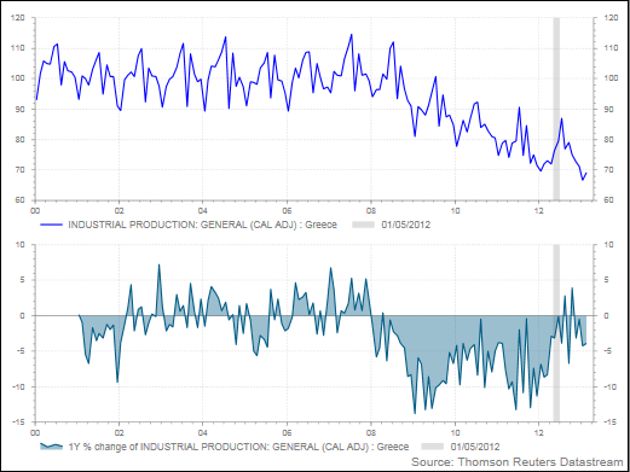 Construction activity is by far this crisis’s biggest casualty, with the deterioration starting way before the troika era. Permits still report declines in the region of 40% for an industry that will never be the same as it was before the crisis. 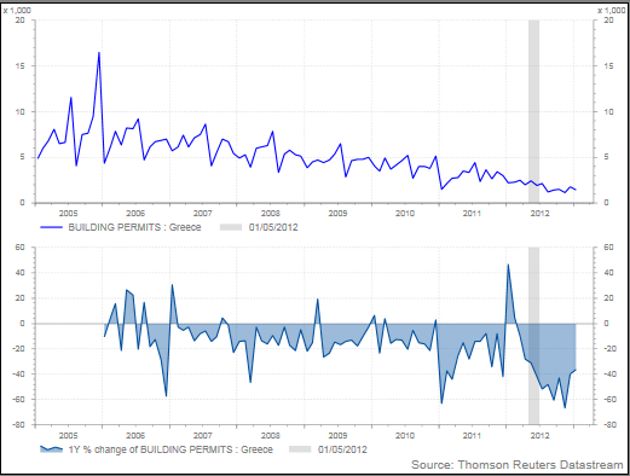 The correction of Greece’s excessive current account deficit has been one of the troika’s main objectives, having linked the country’s competitiveness improvement with the shrinking of the external deficit. Assisted by a sharp decline in imports – although exports of goods and services have reported only modest increases mostly affected by a disappointing touristic season last year and lower revenue from shipping – the reduction of the current account deficit is remarkable, reporting even current account surpluses during certain months in the second half of last year. 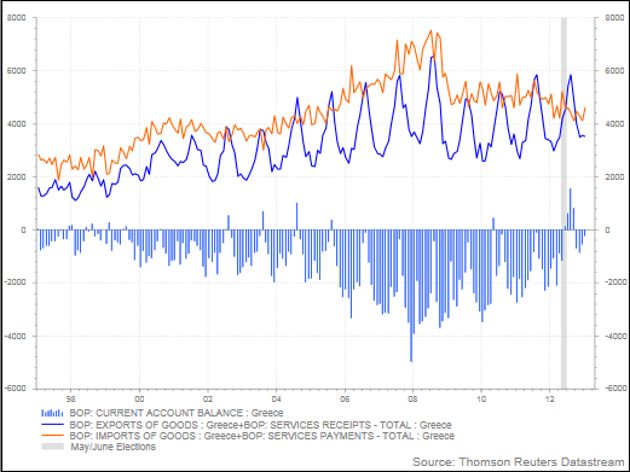 Greece’s macroeconomic picture remains uncertain. It is beyond dispute that certain indicators reached the bottom in the first half of last year. Others are simply reflecting the policy mix and the overall conditions in the economy, far from showing signs of notable recovery.

Following the conclusion of the troika’s review, the disbursement of a significant chunk of loans – as was reported during the weekend – and the good touristic season that everyone anticipates, Greece could have a period of six months ahead that will allow the overall sentiment to show tangible signs of steady improvement that will start getting reflected on the hard data.

For now, when people hear that the data is improving they are more likely to think of Olli Rehn’s visit in May 2010 when he wished Greeks “καλό κουράγιο” for what is coming ahead. Three years later, “κουράγιο” has run out for many.