You are at: Home / Agora / Honey, I shrunk the Greeks

It was Tuesday the 28th of June 2011. The Greek Parliament was starting a two days session for the debate and vote of the Medium Term Fiscal Strategy – Mesoprothesmo in Greek – and the demonstrators were gathering by the thousands at Syntagma square to protest against yet another austerity package demanded by the troika. The entire world was looking at Greece. The balconies of the hotels around the square were filled with camera crews and numerous journalists in the crowd were interviewing protesters.

Around midday, I was standing at the spot in the picture when a journalist followed by a cameraman approached two teenage girls standing next to me. Politely he introduced himself, he was from a Danish channel and asked them if they thought that Greek MPs should reject the proposed austerity package, a question to which the girls without much thought responded to saying yes. He then went ahead reminding them of the blatant blackmail from the troika that failing to pass the new measures Greece would not receive the program tranche and will be led to a messy default.

It was at that point that I found myself spontaneously stepping in and asked him why he thought that this ultimatum was the only option. Why he thought this type of blackmail was acceptable between partners, who was really benefiting from this ‘bailout’ program and why given Greece’s mounting debt problems a debt restructuring that would lift large portion of Greece’s fiscal efforts was not considered as a realistic option.

He was listening patiently to my barrage of questions but we did not get the chance to continue the discussion, as the lines of police started putting their gas masks on we were approached by one of the many middle-aged ladies that were handing out surgical masks and asked us if we wanted to have our faces sprayed with a mix of water and Maalox for protection from the teargas treatment that we were about to receive.

Almost two years from that day the answer to my question to the Danish journalist came from the IMF itself in its evaluation report of Greece’s 2010 Stand-by Arrangement.

"An upfront debt restructuring would have been better for Greece although this was not acceptable to the euro partners. A delayed debt restructuring also provided a window for private creditors to reduce exposures and shift debt into official hands. As seen earlier, this shift occurred on a significant scale and limited the bail-in of creditors when PSI eventually took place, leaving taxpayers and the official sector on the hook."

The IMF without any hesitation admits that the main beneficiary of that May 2010 so called Greek bailout was not Greece itself but the eurozone as it gave the opportunity to French and German banks to get paid in full and unload their large exposure to Greek debt from their books on the official sector and European taxpayers. The eurozone was given the necessary window to start the process of building a firewall around Greece given the exposure of their banks to the sovereign debt of the overall eurozone periphery.

Over the last three years in Greece, this view that now represents the official assessment and position of one of the troika’s members was demonized and ridiculed as conspiratorial in spite of the fact that one never needed to look further than the official documentation of the program to realize its real objectives. 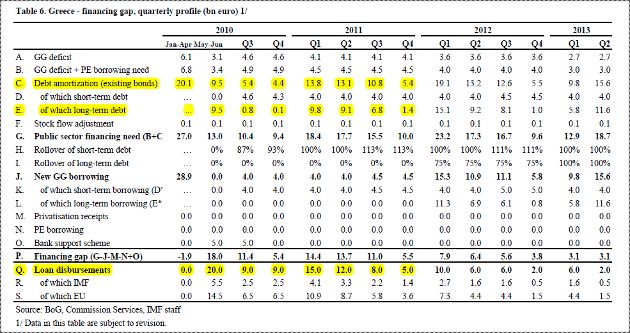 In 2010 and 2011, the disbursements to Greece were scheduled to amount 78 billion euros. Out of that, close to 58 billion were earmarked to paying off maturing long term debt. The first disbursement of 20 billion went towards paying off a maturing bond in the end of May. In the same period, according to ELSTAT, Greece paid over 28 billion euros in interest. In 2011 alone interest payments were at the highest that the country ever had to pay for debt servicing, 15 billion euros.

Even as part of the design of the first program, interest payments were expected to exceed 8% of GDP in 2013 and 2014. After the PSI and the debt buyback in the end of last year this figure for 2013 will be reduced to below 5% of GDP, just fewer than 9 billion euros.

Meanwhile, the troika financed a primary deficit of 10.9 billion in 2010 and 4.9 billion in 2011, 15.8 billion euros in total. In the first two years of the program and before the debt restructuring was put on the table, vast majority of the eurozone and the IMF’s financing was directed towards uninterrupted maturities and interest payments while foreign Greek debt holders were given enough time to limit their exposure with the ECB being a ready and willing buyer via the SMP. 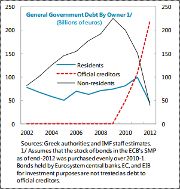 At the same time, the holdings of Greek debt by domestic investors actually increased in 2010 and 2011 and when the PSI was introduced Greece was saddled with an added 48 billion euros of debt to recapitalize its banks, something that neutralized the benefits of the PSI. Combined with the fact that ECB and National Central Banks held bonds were excluded from the debt exchange, at the time that it was initiated the whole debt reduction exercise barely moved the needle in terms of addressing the issue of Greece’s debt burden.

Greek society has paid a heavy price for the flaws in the design of the first program. The IMF admits that an early debt restructuring would have eased the burden of adjustment on Greece and most importantly would have contributed towards a less dramatic blow on the economy, employment, the prospects of the Greek youth and the purpose of many others.

A Greek politician in the early days of the program said that the Memorandum with the troika was a “blessing” for the country. Indeed a blessing it was but primarily for the eurozone. It is time to return the favour soon.