You are at: Home / Agora / About to soar? Greece's economy still needs to be handled with care

Over the first half of the year, growth stands at 0.6 percent. Although the figure is nothing impressive, the Greek economy has not performed like that since 2008. 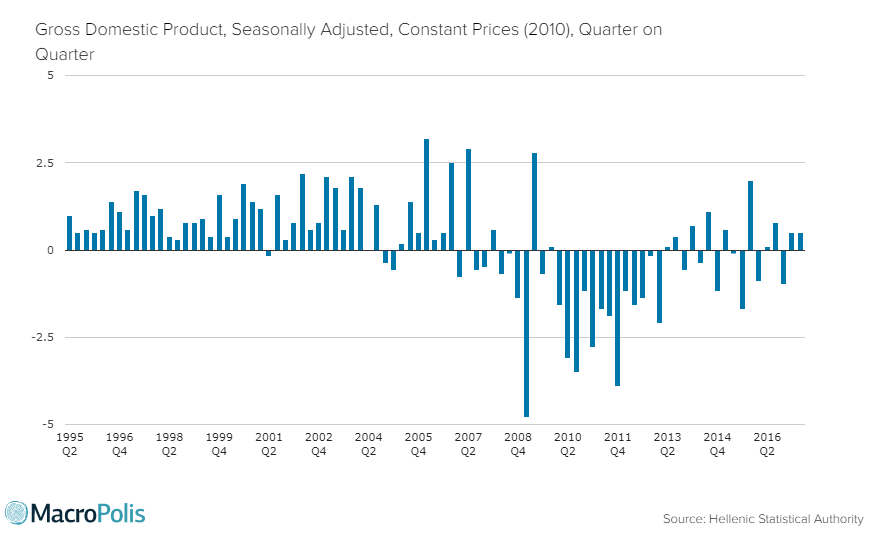 Exports were up by 9.5 percent in the quarter and have increased by almost 7.5 percent in the first six months. Exports of goods rose by 8.8 percent quarter-on-quarter while services receipts jumped 11.5 percent.

Also on Friday, Markit announced that Greece’s PMI reached its highest level since August 2008 on the back of higher new orders from both domestic and foreign clients. Greek manufacturing firms hired staff at their highest rate since January 2000, while purchasing activity was at a nine-year high as firms expanded their output at the sharpest rate in 40 months. 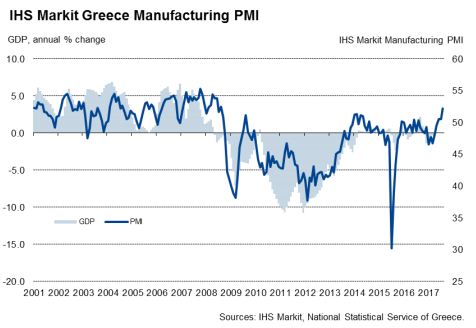 Industrial turnover in June rose by 8.1 percent for the eighth-successive month with most of the gains coming from the non-domestic market which rose by 17.2 percent. The domestic-market increased at a slower pace by 2.3 percent. 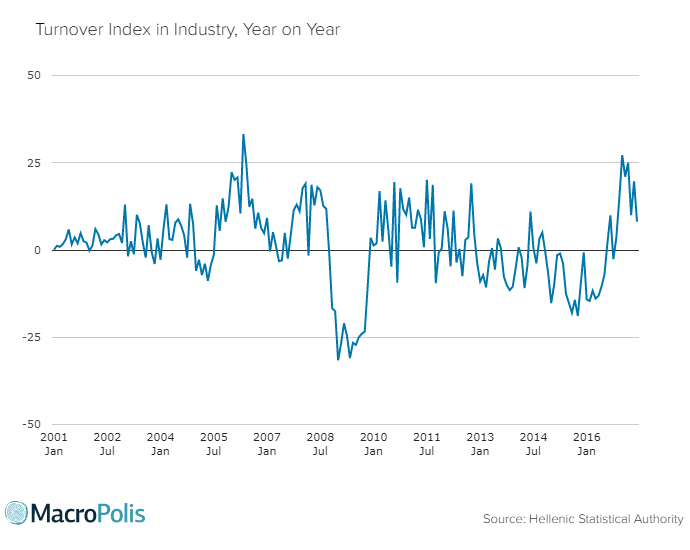 Although slowing from May, industrial production in June rose for a ninth successive month, up by 1.6 percent. 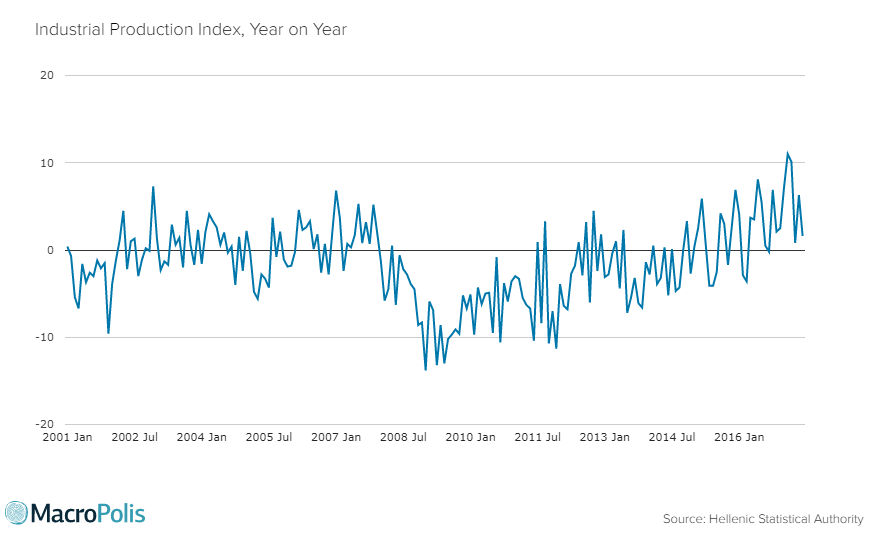 Earlier last week, the latest sentiment indicators published by the European Commission confirmed the steady improvement in economic sentiment and consumer confidence, following the conclusion of the nine-month long programme review. Sentiment has recovered quickly from the dip in the first half of the year as the review was drawn out, and is now at levels not seen since early 2015 when SYRIZA took office. Consumer confidence in August marked its fifth straight month of improvement. 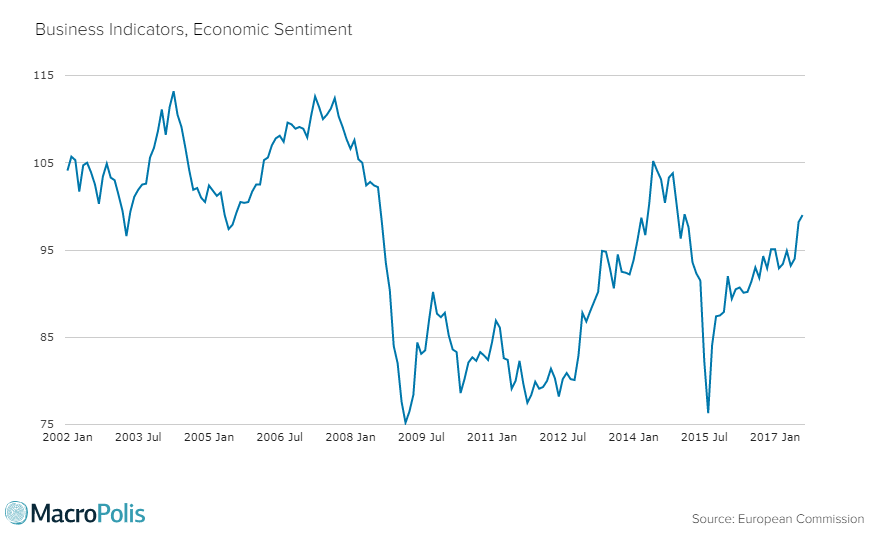 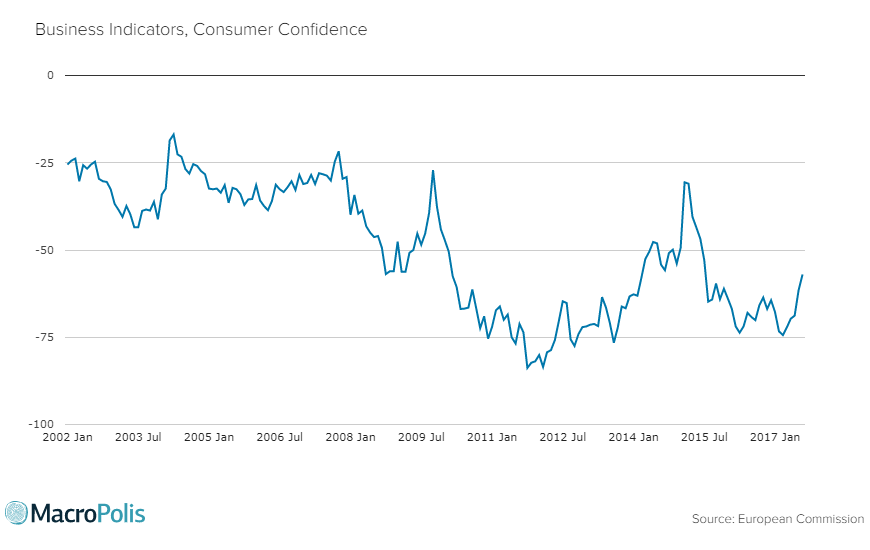 In June, retails sales continued climbing for a sixth successive month and for the ninth out of the last 10, going up by 3.2 percent. 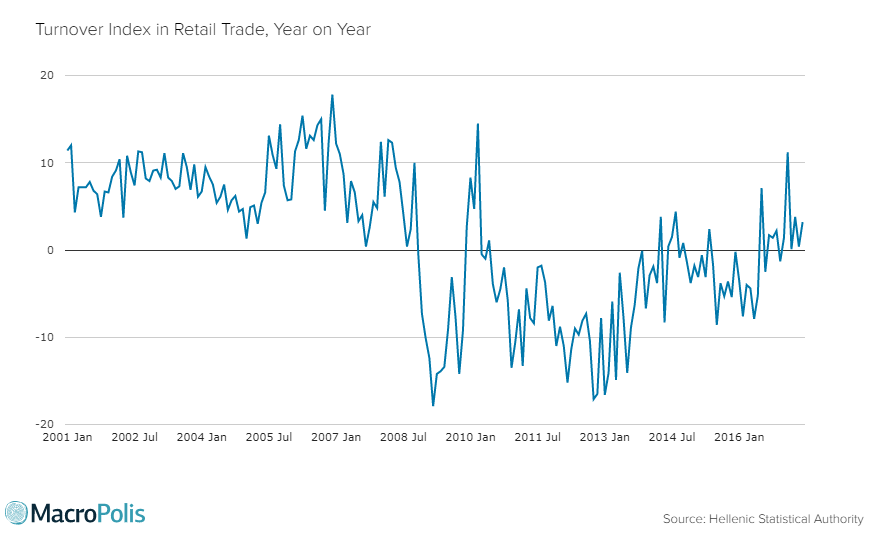 Private sector deposits, which have often proven to be one of the most reliable measurements of sentiment, posted another inflow of more than 900 million that has taken the cumulative inflow over the last three months to 2.6 billion euros. 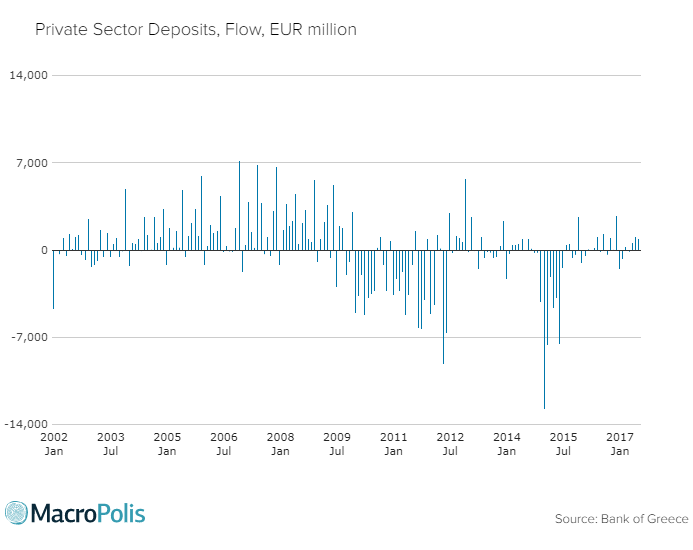 Following the inflows since May, Greek banks’ Eurosystem funding fell for the 25th successive month in July when it declined by a further 3.89 billion euros. The month-on-month decline is the most substantial for the year, surpassing the drop in June of 2.67 billion. Central bank funding stands at 50.37 billion euros at the end of July, which is the lowest reading since May 2014. 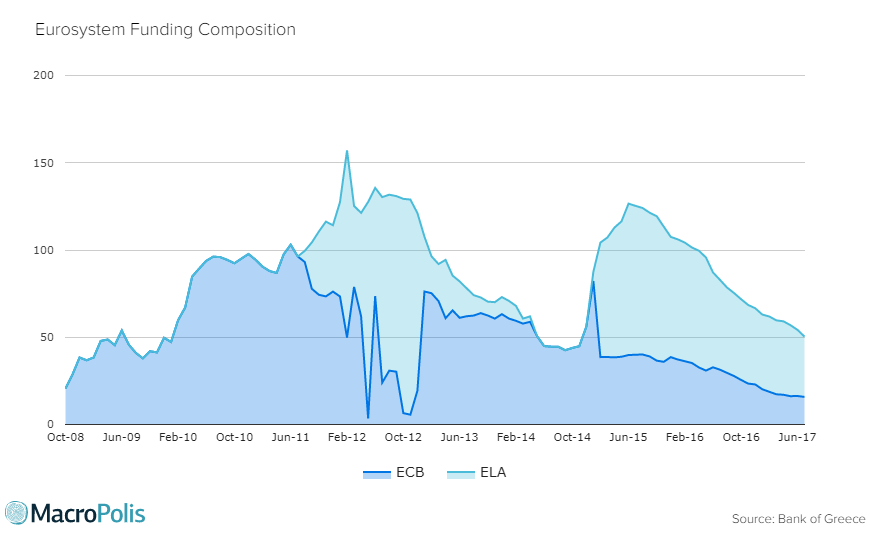 The European Central Bank (ECB) further reduced the emergency liquidity assistance (ELA) ceiling for Greek banks on August 3 by a total of 1.6 billion, currently standing at 38.9 billion euros, from 91 billion in mid-July 2015, when the third bailout programme was approved.

Greece's travel receipts rose by 14.2 percent in June, picking up pace from the growth of 1.7 percent noted in May. Receipts totalled 2.05 billion euros during the month while the travel surplus improved by 15.5 percent to 1.91 billion from 1.66 billion a year ago.

More visitors spending on average more per trip brought the aggregate figure for travel receipts for the first half of the year up by 7.1 percent to 4.11 billion euros, while the travel surplus increased by 9.4 percent to 3.17 billion euros.

According to SETE’s projections, foreign arrivals are estimated to rise by 1.2 million to 26 million in 2017 while travel receipts are foreseen to increase by at least 1 billion and range between 14.2-14.5 billion.

This pick-up in activity is reflected on the hiring balance recorded in the Labour Ministry's Ergani database. A hiring surplus is noted throughout the first half of the year, although flexi and seasonal contracts outweigh permanent ones. The aggregate figures for the seven-month period indicated net hirings of 263,145, up by 9,200 from last year’s figure. Worker confidence in their labour prospects is reflected on the higher number of voluntary departures in the months not associated with the end of seasonal contracts. 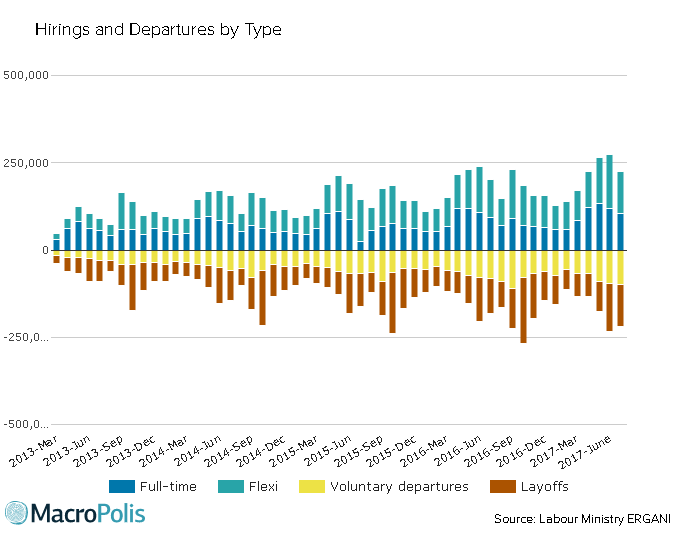 The rate of unemployment continues its slow and painful decline, standing at 21.7 percent in May, its lowest level since January 2012, having been reduced by 1.9 percentage points over the last 12 months. 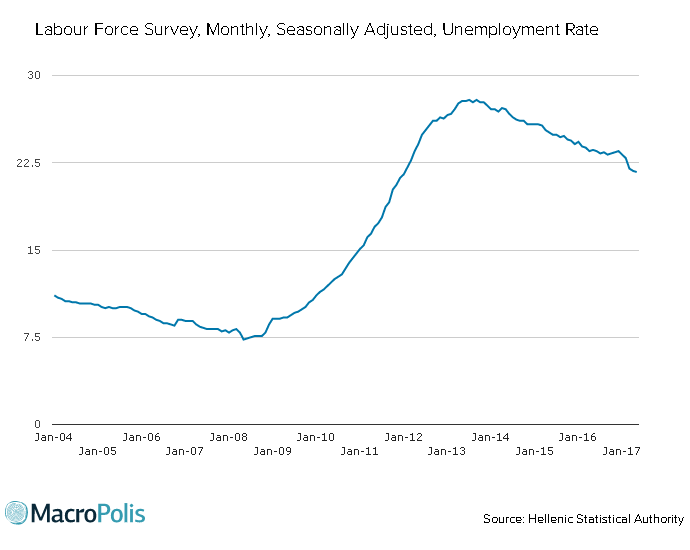 In August, all three ratings agencies completed their credit reviews and have now placed Greece on a positive outlook, with two of them upgrading the country’s rating. They see a stable political environment with little risks of policy reversals and prospects of completing the programme, further debt relief to be granted by the eurozone that will facilitate Greece regaining solid market access and sufficient cash buffers to cushion the post-programme period.

These are all welcome signs for an economy that has been battered like no other over the last nine years. Hard data send clear signals that a recovery has emerged and is gradually taking hold.

However, as much as the economy seems to be experiencing a bounce, the performance over the first half will require the second half of the year to perform impressively to match the forecasts of the Finance Ministry for 1.8 percent growth in 2017.

Private consumption will need to accelerate and investments have to jump, although some of the key assumptions of the Finance Ministry such as improved liquidity, reduced non-performing loans, decisive medium/long-term debt relief and inclusion of Greece in the ECB’s QE programme are not in place.

There is a good chance that GDP growth will land between 1.25-1.5 percent this year, which will present the government with serious challenges in terms of budget performance.

The revenues side of the budget is already struggling to meet the targets, falling 682 million short so far this year. Income taxes are around 400 million below target while indirect taxes also trail by under 100 million.

Expenditure has been curtailed to make up for the underperformance in revenues, having underspent in grants to hospitals, social security spending and allowances for families with many children, although that is only masking the problem in the headline primary deficit figure.

The tax burden remains a major obstacle that further challenges the revenue side of the budget. According to data from Independent Authority of Public Revenues (IAPR), in the second quarter, overdue obligations amounted to 5.48 billion euros, although down on the same period of last year, which stood at 6.81 billion.

So far, for every 3.17 billion of collected taxes per month of this year there is another 910 million of unpaid taxes each month that is added to the pile of unpaid tax obligations.

The Greek state also struggles to be timely on its own obligations despite the drive to reduce arrears and improve market liquidity as programme conditionality with funding available from programme resources.

Year to date, arrears have risen by 681 million euros, driven mainly by rises in tax refunds (+295 million euros), hospitals (+100 million) and social security funds (+100 million). They dropped below 5 billion only in April this year and currently stand at 5.44 billion as of July with the majority attributed to social security funds where arrears stood at 2.3 billion euros at the end of July, over 42 percent of the total. Tax refunds were the next major contributor at 1.52 billion, followed by hospitals at 550 million. 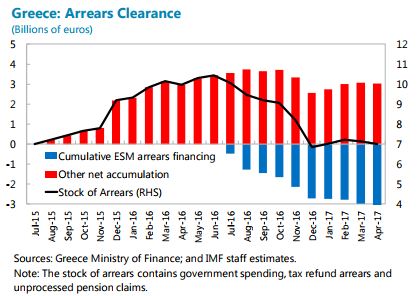 Liquidity in the Greek economy remains a massive challenge. The banking system is still constrained by capital controls, credit is in negative territory since January 2011 and the ongoing effort of banks to deleverage has brought the stock of loans to 189.2 billion euros in July. 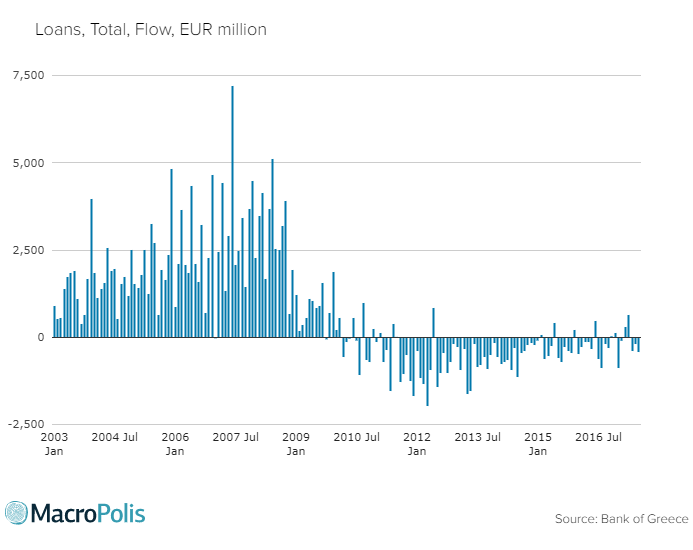 In July, the Bank of Greece (BoG) said that at the end of the first quarter of the year, NPEs stood at 45.2 percent of loans. The same BoG report revealed that nearly 74 percent of NPEs are non-performing for more than a year, whereas over half of them are non-performing for more than two years. This figure doubled within 2016 and is a clear indication of the difficulty in effective NPE management.

The progress in the upcoming review is a key dependency for economic developments for the rest of the year and even the next. As much as this review does not have the complexities and the many moving parts that the previous one had, it still has close to 100 prior actions that need to be completed.

The aim is to wrap it up by the end of the year so it can be signed off at the December 4 Eurogroup. Last year’s failure to close the review by early December was one of the reasons that contributed to the final quarter of year posting a 1 percent decline which had a carry-over effect on this year’s GDP.

With the economy and the budget so finely balanced and the fiscal targets edging higher this year and the next, a negative development on that front is the last thing that Tsipras’s government needs.

Greece has been a highly complex problem that has tripped up everyone who attempted to resolve it.

The Greek economy has shown a remarkable resilience since 2013 even following the major setback of the first half of 2015 and the dreadful negotiation tactics that left the legacy of the capital controls. There are numerous encouraging signs that can lead to a deep-rooted recovery if allowed to stay on the current course, while the challenges are highly sensitive and often throw developments off track either by creditors’ demands, their own limitations or the domestic political hesitations.

Greece still has ahead roughly a year of programme implementation and a series of years of high fiscal targets with no other policy levers to offset the impact the surpluses asked by creditors have on the economy.

In its recent document for the request of the precautionary Stand-By Agreement, the IMF suggested that Greece should bring forward the measures of pensions cuts and the reduction of the tax free threshold to ensure that it meets the 3.5 percent of GDP primary surplus target. At the same time, it hinted that the offsetting measures that aim to relieve some of the burden that pension and tax reforms will have on incomes should not be implemented before the primary surpluss target is reduced in five years time.

This is the type of combination that in the past has thrown Greece in political crisis and economic projections out of the window.

Like all fragile things, the Greek economic recovery needs to be handled with care.