You are at: Home / Agora / Labour market reforms did exactly what they were supposed to

Greece had a current account deficit of 15 percent of GDP in 2008, when the crisis struck. Unit labour costs since euro adoption had increased by 35 percent, compared to less than 20 percent in the euro area. Greece’s minimum wage was higher than countries that would be considered peers, 50 percent above Portugal’s and 17 percent higher than the minimum wage in Spain. By 2009, total exports were below 20 percent of GDP, mostly boosted by tourism and shipping, while exports of goods were just 14 percent of what the country produced.

Greece’s lenders identified a serious competitiveness issue that could not be addressed with the standard tool of currency devaluation to improve relative prices since Greece was in the euro. The path available was internal devaluation and structural reforms, which would “improve competitiveness and alter the economy’s structure towards a more investment- and export-led growth model.”

Greece did not just require some fine-tuning. The aim was an entire paradigm shift that would reallocate resources from the non-tradable to the tradable sector and extensive structural reforms to modernise the public sector and redesign the product markets that would foster competition and lead to productivity gains and a substantial improvement of the country’s external competitiveness.

However, even in impeccable implementation, structural reforms need time to take hold and until those productivity gains are realised, other levers are needed to drive prices down and restore competitiveness within the framework defined by Greece’s lenders. So, they turned to the labour market.

In spring 2010, when the first programme was designed, the labour market was too rigid to deliver what the programme envisaged. There was high employment protection for both temporary workers and permanent white-collar workers which did not allow young workers, women and long-term unemployed to enter into the labour market or transition into permanent jobs. The extension of collective agreements to all enterprises, including those not involved in the negotiations, prevented wage moderation and led to higher prices. The wage-bargaining processes set relatively high minimum wage levels, which put young workers at a disadvantage, particularly in the absence of links between formal education or training and the needs of the labour market.

To address those issues, several reforms across the labour market were included in the programme conditionality.

The wage bargaining system in the private sector would need to be significantly reformed, pay rates for overtime work would be reduced and flexibility in the management of working time should be enhanced. The new regime would allow local pay agreements to set wage growth below sectoral agreements and introduce variable pay to link wages to productivity performance at the firm level. The labour arbitration system would become more flexible, allowing both employees and employers to resort to arbitration if they disagree with the proposal of the mediator. New wages would be introduced below the minimum wage for groups such as the young and long-term unemployed, while measures would be put in place to guarantee that current minimum wages remain fixed in nominal terms for three years. Employment protection legislation would be relaxed by extending the probationary period for new jobs to one year, the overall level of severance payments would be reduced and the same severance payment conditions would apply to blue- and white-collar workers. The threshold for collective dismissals, especially for larger companies would increase and facilitate greater use of temporary contracts and part-time work with greater working hours flexibility.

Although Greece’s lenders debated in 2010 whether they should include in the programme conditionality an across-the-board cut in private sector wages, the idea was finally dropped. A cut in private sector wages would disrupt economic activity and would have made fiscal consolidation even more difficult, jeopardising debt sustainability. Due to the oligopolistic nature of several sectors of the Greek economy, the cuts in labour costs could have been absorbed by increases in mark-ups, with a reduced impact on external competitiveness. Greece's export structure is concentrated in exports of services, demand for which is not price elastic, and in capital-intensive goods (such as chemicals and pharmaceuticals), for which the cost of labour is a marginal component. Finally, cutting private wages would have increased income inequality across the society.

However, private sector wages did not stay intact for long. Although the first set of labour market reforms did translate into lower labour costs in 2011, Greece’s lenders wanted to accelerate the reduction by cutting labour costs by 15 percent in three years. Since the social dialogue between and with private sector employers' and employees' representatives could not deliver an outcome what would be satisfactory for the lenders objectives, the government legislated a reduction in minimum wages in the private sector and a modification of several wage-setting procedures, including the rules on the expiration of collective agreements.

The wage floors in the National General Collective Agreement (NGCA) were reduced by 22 percent, and by 32 percent for those younger than 25. The reduction in the minimum wage was expected to create additional room for downward wage adjustment to be decided by employers and employees in each firm or sector. The lower NGCA wages would have a strong signalling role to other sectoral and firm-level wages. To help this process, automatic wage increases (i.e. seniority bonuses) were also suspended.

Greece’s wages were not only compared to eurozone peers in southern Europe but also with neighbours in the Balkans and countries in Central Europe.

The interventions in Greece’s labour market were so forceful that, along with the sluggish implementation of reforms in products and services markets due to resistance from vested interests that obstructed price competitiveness gains, they led to labour carrying a disproportionate share of the effort. According to the IMF, “The fact that the burden of the adjustment has been borne largely by wage earners has increased resistance to reform.”

By the end, it would be easier to hire and fire in Greece, there would be greater flexibility in types of contracts and labour would be substantially cheaper. It was not long before the impact of all these interventions started becoming visible in the actual data.

Looking at data from the Labour ministry’s ERGANI database that registers movements in hirings and departures, it is evident that although there is an across the board increase in employment, there is a shift towards flexible hirings of part-time or shift work, with lower weekly hours and subsequently lower pay gradually representing larger parts of employment types. 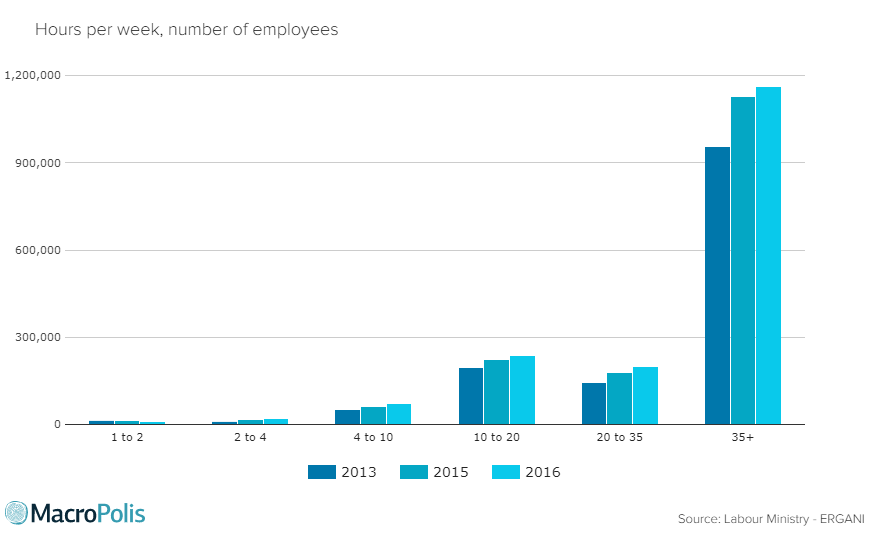 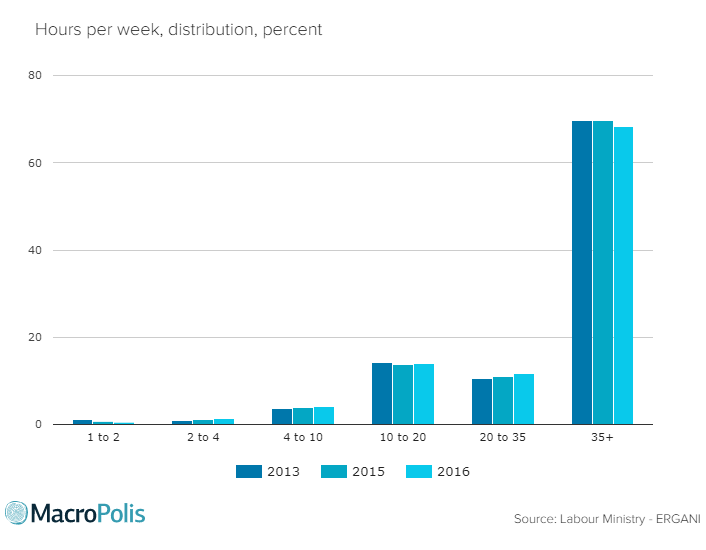 Hirings for only 2 to 4 hours weekly have doubled, the biggest percentage increase is in the 4 to 10 weekly hours segment with a 40 percent rise, followed by the 20 to 35 hours with a 39 percent increase in hirings of that type.

At the same time, the rise of hirings of over 35 hours per week hirings is nearly half at 22 percent.

According to ELSTAT, part-time employment has been steadily increasing in Greece over the last decade to a peak of 10.5 percent in Q1 2017. Full-time have substantially dropped from the 96 percent peak in 2001. Part-time employees have more than doubled to 374,000. 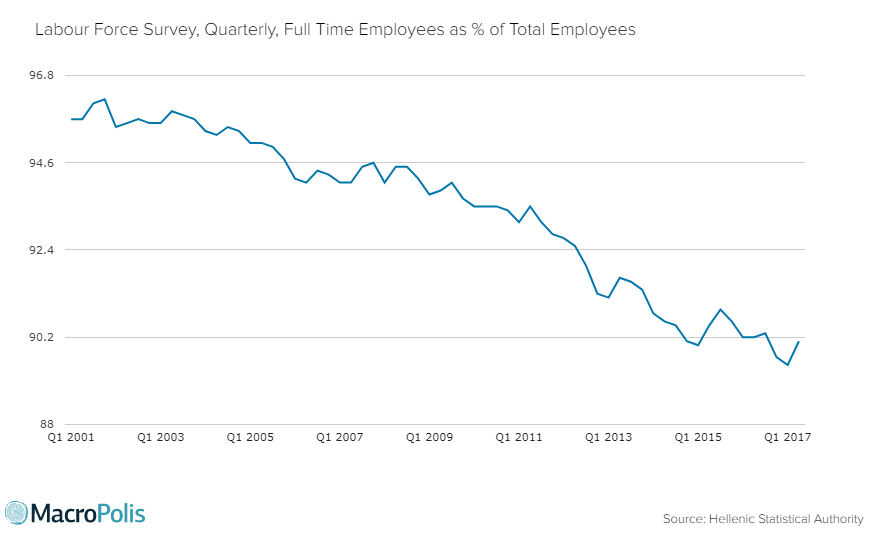 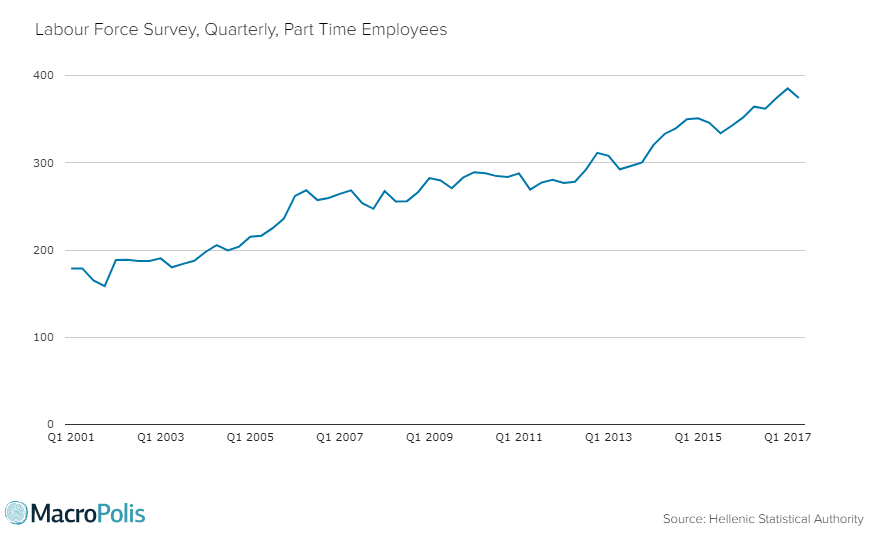 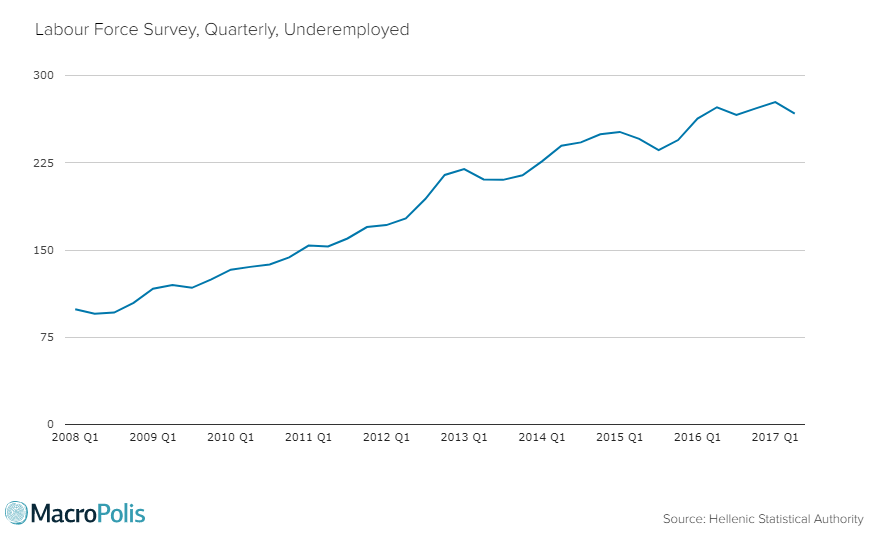 The flexibility in the labour market is reflected in major shifts in the pay scales. 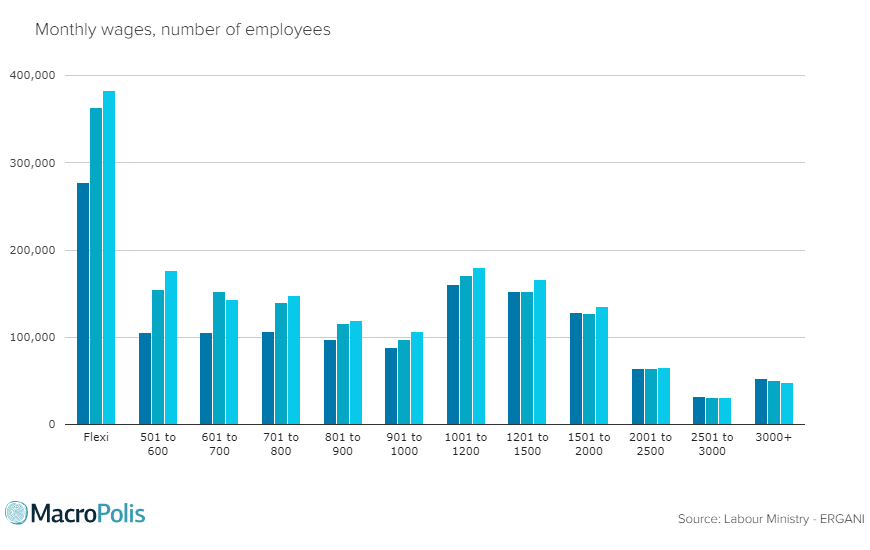 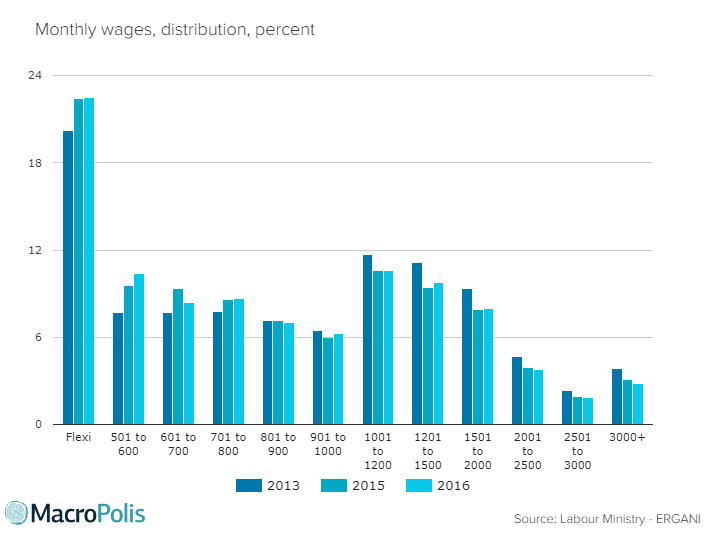 More flexible types of work combined with reduced costs for employers opened the Greek labour market to younger job seekers although thanks to the seasonal nature of the tourism industry it always attracted in the services, accommodation and food industry youngsters without specific skills. 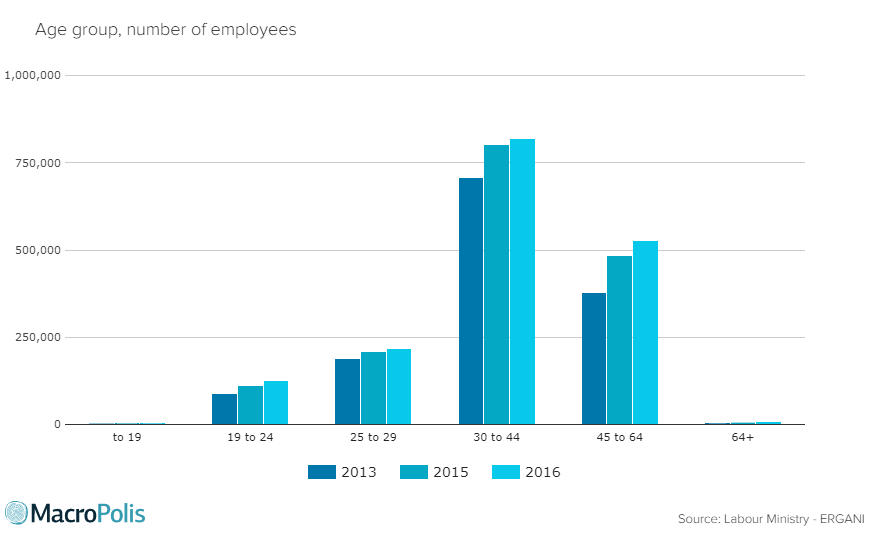 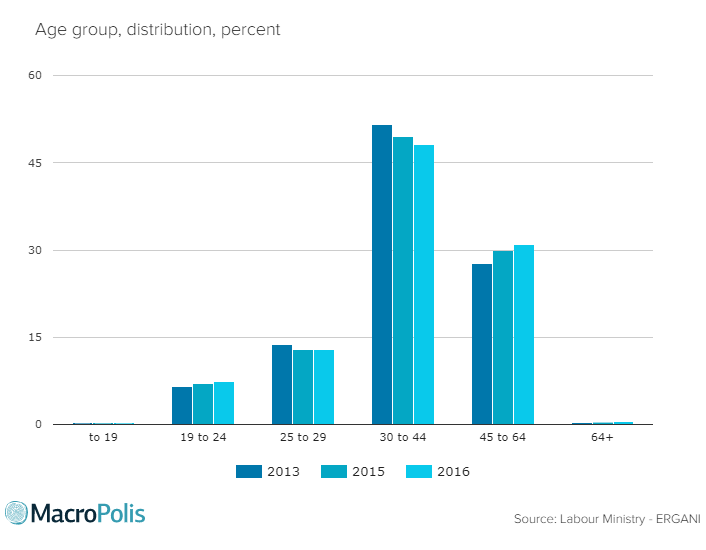 The hirings of those under 24 jumped by more than 40 percent since 2013, when the corresponding rise in hirings for the age groups of 25 to 29 and 30 to 44 is less than half of that at 16 percent. The proportion of hirings for 24- to 44-year-old job seekers has dropped by nearly 4 percentage points to below 61 percent.

Unemployment in the 15-19-year-old age group has dropped from a peak of 74 percent to 55 percent in the latest quarter. Equally, the rate for the next group (20-24) has declined from 58 percent to 42 percent in Q2 this year. 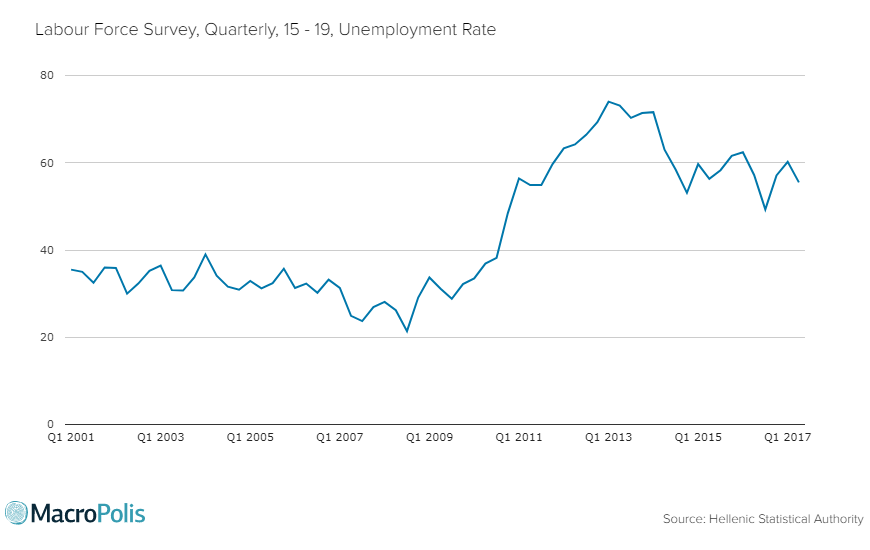 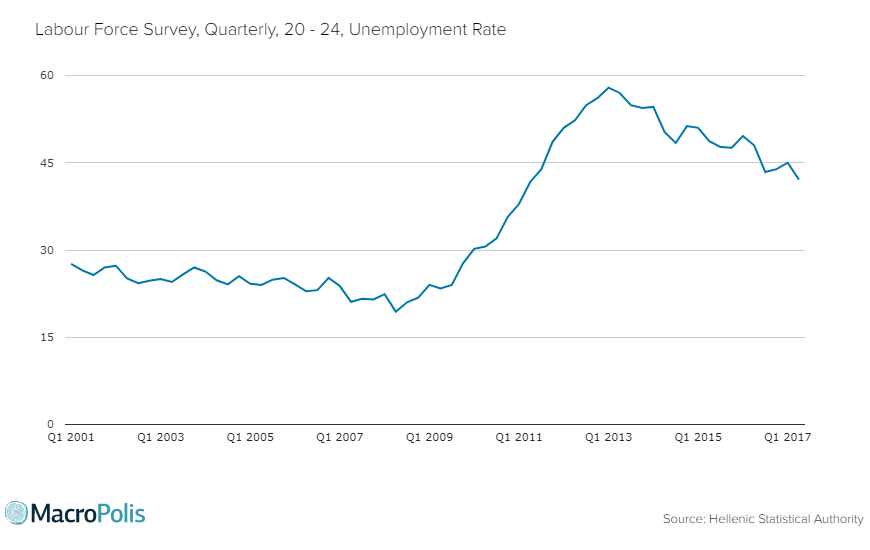 The minimum wage for this age group in 2012 was brought down to 511 euros.

In the period since the unemployment peak of the last quarter of 2013, the lion’s share of the jobs created has been from the tourism industry, which is highly seasonal and quite labour intensive and leads to lower wages.

The realisation that the reduction in the unemployment since 2013 has been in the form of flexible types of employment and with low wages often below the threshold of 500 euros features in Greece’s domestic public discourse. Often it is used by opposition parties for political expediency, hoping to tarnish the economic data, which the government has used over the last few quarters to defend its claims that a recovery is on the way.

However, those who have been vocal supporters of structural reforms or belong to parties that voted for the labour legislation set out previously should not express any surprise or indignation about the social impact. The changes implemented during recent years have delivered the exact results they were intended to.