You are at: Home / Agora / The euro debate Greece is not having

You may be amongst those who are not convinced of the devastating effect that the policy mix and pace of fiscal contraction in Greece is having on society. If so, you may subscribe to the official line trotted out by the country’s lenders that the program is helping the country regain competitiveness and the economy fix its external imbalances. This is the greater cause that is demanding such a sacrifice. There is no gain without pain, goes the argument.

However, more than three years into the troika program there is very little evidence that one of these key objectives has actually been achieved. It is extremely doubtful whether the Greek economy is indeed regaining part of the competitiveness it lost after joining the euro.

There is no dispute that Greece's current account, from a staggering deficit of close to 35 billion euros in 2008, is nearing balance. But the majority of the correction of the trade deficit is covered by a collapse in imports due to domestic demand almost evaporating after three years of austerity and disposable incomes plummeting by almost a third.

It is a fact that Greek exports are on the rise and that 2013 will be a record year for tourism but Greece's total exports will still fall short of the 56-billion-euro level they reached in 2008, a time when the country was uncompetitive, if you believe the prevailing argument.

In a June document evaluating its involvement in the Greek program back in May 2010, the IMF includes the chart below, which shows that although labour costs have nosedived since 2010, prices - which really reflect how competitive you are - have hardly moved to cover the lost competitiveness.

There is much to be debated about the prices’ resistance to falling at the same pace as wages, and it is often one of the troika's arguments that there is not enough competition in the products markets. However, aside from the fact that prices are known to be sticky downwards, in a cash-starved economy that is in a downward spiral it may even be a prudent management decision to keep prices up, despite falling wages. This helps compensate for shrinking revenues and profits.

The “internal devaluation” rationale is that, in the absence of the currency devaluation which automatically makes everything produced domestically cheaper to the outside world, you suppress domestic demand with the aim of reducing imports and correcting the trade balance. You also implement cuts in costs which are variable, such as wages, unlike other input factors that further feed the effort to push down domestic demand. This naturally leads to higher unemployment and more people without disposable income further suppressing domestic demand. This places the wage negotiating advantage on the employers’ side due to the oversupply of labour pushing wages downward either via new collective agreements or wage negotiations at the enterprise level.

Overall, it creates a perfect feedback loop and a concerted effort to sink an economy.

You might think all this is worth it if there is light at the end of tunnel but that is not true in Greece's case. After three years of brutal austerity policies, Greece remains in a heavily overpriced currency for its economic standards.

A research paper by Morgan Stanley published in September puts the fair value of the euro against the dollar for the Greek economy at just over 1 dollar. The same figure for Germany is 1.53 - the currency currently trades against the dollar at 1.35. The difference between Greece and Germany is about 43 percent and Greece needs the euro to be 25 percent cheaper than its current levels to have a fair chance of being competitive. 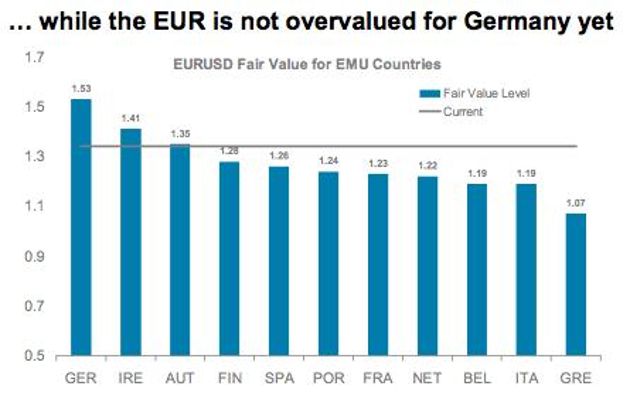 A paper by Deutsche Bank (DB) on foreign exchange pain thresholds puts Germany's at 1.79 against the dollar. Simply put, Germany is in a situation where the euro has to appreciate from its current levels by circa 33 percent before it starts feeling any strain on its competitiveness while Greece is already in this position with the euro at its current trading levels. 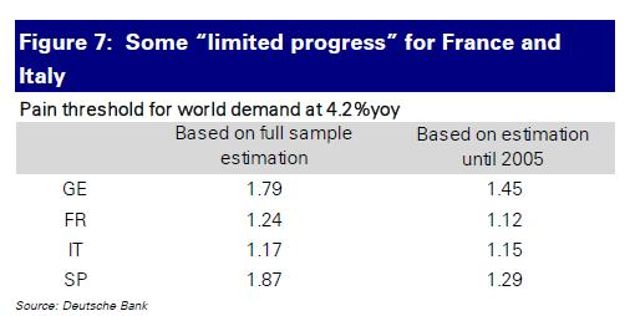 This is the definition of imbalance. Most worryingly, three years of policies that led to a quarter of the Greek economy vanishing does not seem to have made much of a dent on this indisputable fact.

It recently became evident that Germany has no intention of covering even part of this gap as it sees its economy benefiting from the deeply depreciated - for German macroeconomic standards – euro. So, all the adjustment will need to come from Greece and other peripheral countries. In the same DB paper the pain threshold for Italy and France is just 1.17 and 1.24 respectively, which puts even the second- and third-largest economies of the eurozone in an awkward place on the competitiveness front.

It is a debate on these plain macro facts that is missing in Greece. Any discussion around the currency has been stigmatized and leads to political labelling. The real question we need to answer is how much of the economy and society are we willing to sacrifice to stay in the euro. And if Greece’s conscious decision as a nation is to remain in the euro, is there an actual national plan or we will find ourselves in a perpetual deflationary vicious cycle of low wages, subdued demand and high unemployment because we will remain a services economy with low value added and labour intensive industries?

Questioning the benefits of a currency whose flaws and institutional weaknesses have been so blatantly exposed over the last three years should not earn one a place in the 'drachma lobby'. These questions should be used as the fulcrum for a much needed debate on how Greece will be able to respond to the euro challenges. It is about time we have a debate that extends our horizon beyond the next troika review and loan tranche, above accounting primary surpluses and superficial success stories.

So far, neither the government, nor the opposition are making any contribution towards these pressing issues. If this does not change, Greece’s task ahead will remain Sisyphean.