You are at: Home / Agora / Growth, not just of the economic variety

On Monday, the Hellenic Statistical Authority (ELSTAT) published its provisional GDP data for the first quarter. Coming amid repeated downward revisions of annual growth forecasts for 2018 and in the wake of weaker-than-expected growth last year (1.4 percent), many in Greece were bracing for inauspicious figures to be announced at the beginning of the week.

In fact, ELSTAT indicated that the economy grew by 0.8 percent quarter on quarter and 2.3 percent year on year. This was the highest growth on an annual basis that Greece has seen since Q1 in 2008. This year’s Q1 also marked the fifth consecutive quarter of growth, which is the longest upward streak since 2005/6. The year-on-year growth in Q1 was also in line with the eurozone average of 2.5 percent, making it the first time in a while that Greece was not a negative outlier.

Of course, as is the case with other positive macro data (e.g. manufacturing PMI, hiring figures and economic sentiment), there is a difference between what the numbers show and what people feel. Naturally, following an economic depression that has lasted around a decade, a consistent and robust recovery over several years is needed before it feels that a corner has been turned.

It is also true that while the GDP statistics displayed an increase in exports, investment and consumption data remained weak - a reminder that the recent upturn is still at an early and vulnerable stage.

Nevertheless, in the journey along the winding, precipitous road towards better days a significant and hopeful step for Greece was taken in the first quarter of the year. Whether you believe it is a decisive step or nothing of the sort, it is newsworthy, especially amid much that remains depressing about the country’s situation, including the heavy tax burden, frightening unpaid debts and the dire state of its politics. Yet on Tuesday morning just three of Greece’s seven main political newspapers referenced the development on their front pages. In two cases (Kathimerini and Ethnos), there was a brief item referring to the inside pages, while one newspaper (Eleftheros Typos) bore a medium-sized title directing readers to the story. 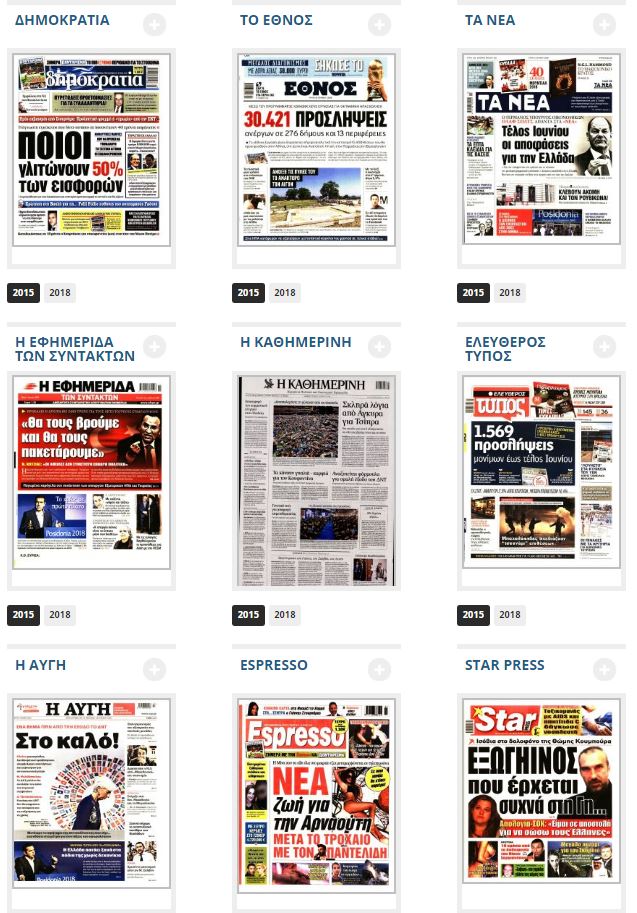 There’s a straightforward explanation for the absence of the upturn in GDP from the most prominent news items. Part of the local media, for ideological, political or other reasons, is intent on focussing only on negative news and sweeping under the carpet anything that could be interpreted as a boost for the SYRIZA-Independent Greeks (ANEL) coalition.

This is nothing unusual: A section of the Greek press also ignored any positive developments in 2014 - the last time the economy had started to show signs of recovery - because it was aligned to SYRIZA or had decided that the New Democracy-led coalition was on the way out and nothing more could be gained from showing it any further allegiance.

Then and now, some Greek newspapers served up a constant diet of doom as part of a propaganda battle masquerading as journalism in the belief that this will sway voters, who are presumed to be too doltish to grasp the daily problems they face and make an informed judgement based on what they see and hear around them.

But this element alone makes for an incomplete explanation. Political allegiances undoubtedly influenced the way the GDP data was covered, or not covered in most cases, but there is more to the story. Out of three newspapers in the group of seven that are supportive of the government, only one (Ethnos) referenced the GDP data on its front page. The other two (Avgi and Efimerida ton Syntakton) had no mention of the encouraging growth figures.

One of the possible explanations for this oversight is that the left-leaning media has displayed an aversion to tangible data during the Greek crisis, unless it has added to the drama in its interpretation of developments. It has been much more comfortable highlighting the destructive impact of austerity and recession than any other macroeconomic trends. As a result, the upticks in various indicators since last year have often been dealt with in a perfunctory manner unless a government line was being reproduced directly.

There is, though, another element that affects the coverage of what could be considered positive news, which is Greece’s negative state of mind. Unsurprisingly, the economic and social devastation over the last decade has meant that pessimism has seeped into every Greek pore. Even though the country is just a few months away from exiting its third programme with some form of debt relief, the majority of Greeks do not see a light at the end of the tunnel. A Public Issue poll last month suggested that 55 percent of Greeks expect their financial situation to worsen in the coming 12 months, while only 9 percent believe it will improve.

In this environment, anyone focusing on something hopeful is likely to be considered a government lackey, out of touch with people’s suffering or just plain insensitive. This is why those with jobs or whose businesses are doing well tend to keep a low profile, whispering about their achievements out of respect for those who are still having a hard time. The media is not immune to this sentiment.

One wonders, though, what kind of damage all this is doing to the national psyche. A subservient media that only follows narratives which please its political masters and a broader reluctance in society to highlight any success, albeit in an environment that is still extremely testing, do not make for a healthy public discourse.

There are many challenges for Greece on its road to recovery, which is full of pitfalls. One of the less obvious ones involves the media finding a role that lies far from the extremes of cheerleader or hatchet man and for Greeks to be able to analyse their condition in complete honesty. This type of growth will be as important to the country as the economic variety.