You are at: Home / Agora / Mistaking tolerance for a free rein

There were many reasons for New Democracy’s victory, but perhaps the most significant was the desire of enough Greeks to move on after a decade of economic and social upheaval. Around a million voters (out of 5.7 mln that cast ballots) changed allegiances compared to the September 2015 elections as far as the leading two parties were concerned, handing New Democracy a handsome victory and Prime Minister Kyriakos Mitsotakis a clear majority to shape the country as he sees fit.

Mitsotakis rode the wave of positivity that coursed through his approach, characterised by his incessant focus on lowering taxes, attracting investment and growing the economy. A poll by Rass at the time indicated that more than 60 percent of those considering voting for his centre-right party were doing so because they felt it could “take the country forward” rather than because of negative sentiment towards SYRIZA. If one considers the all-out war that some media outlets had declared on the leftist party at the time, this is an even more impressive figure.

The exit from the third bailout and the return of growth to the Greek economy underpinned the change in public sentiment and the shift in perceptions. The lessons of the crisis and the need to believe in a brighter future created a tolerance for market-friendly economic policies that would have been considered toxic in Greek politics just a few years ago.

A recent Kapa Research poll indicated that 36 percent of Greeks believe liberalism will lead to faster/fairer growth against 21 percent who think social democracy is the best route and 15 percent who have faith in socialism to deliver these results. This suggests a substantial shift in voter preferences given that centre-left PASOK and its policies shaped Greek politics and public perceptions since the 1980s. 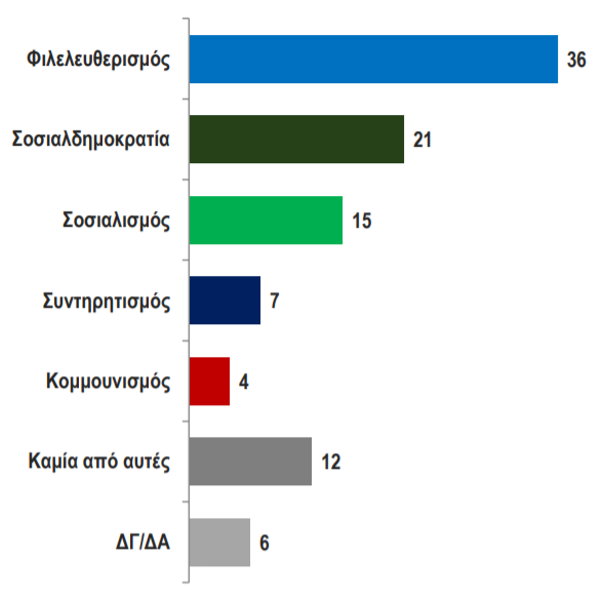 After having learnt the hard way, the Greek public now appears more aware of how and why the country veered so dramatically off course. When Public Issue questioned Greeks in 2014 about whether the memorandum of understanding with the country’s lenders caused the crisis, or whether the MoU was made necessary by the crisis, 47 percent said that the bailout was to blame for Greece’s woes. By October this year, that percentage had dropped to 34. 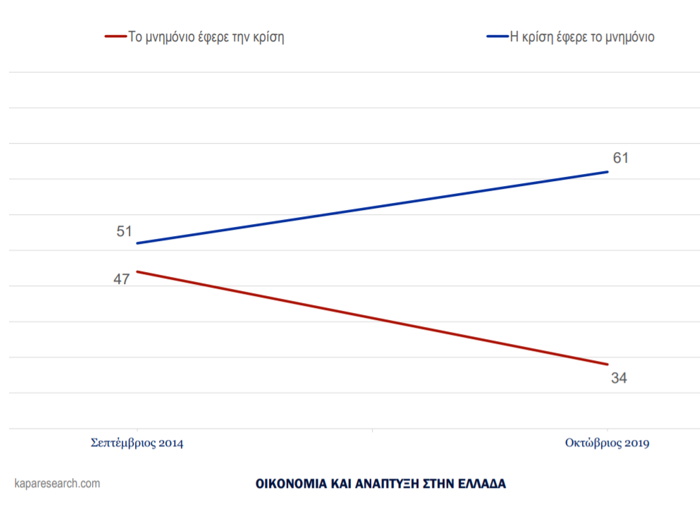 Setting aside the fact that this is a somewhat misleading question because the MoU was indeed brought on by a massive fiscal derailment but it also exacerbated the hardship Greece went through, the shift in public opinion indicates there is a greater willingness now than five years ago to confront the country’s problems rather than to push the blame elsewhere.

This is also evident in the issues that Greeks believe are dragging the country down. The top four challenges identified in the Kapa Research poll were: Corruption in public life (60 pct), public administration (57 pct), delivery of justice (48 pct) and education (33 pct). While one could quibble with the ordering, you would be hard-pressed to find an engaged Greek who would argue that these are not the most urgent, or among the most pressing, issues Greece faces as it tries to move on from the arguments over austerity and bailout conditionality.

Leaving behind the crisis has also led to somewhat of a rehabilitation in the relationship between Greeks and Europe’s institutions. According to the latest Eurobarometer, whereas trust in the Greek government and Parliament ranges between 20 and 25 percent, faith in the European Parliament stands at 47 percent, falling to 34 percent for the European Commission. Also, 60 percent of Greeks think the euro is good for their country. 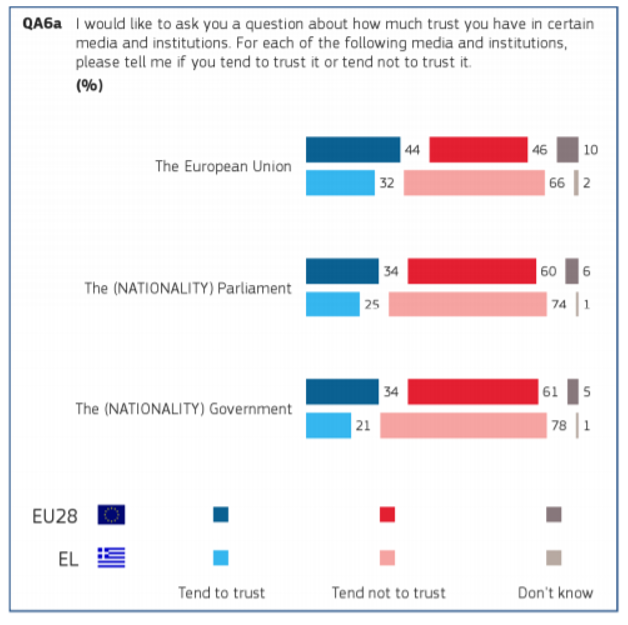 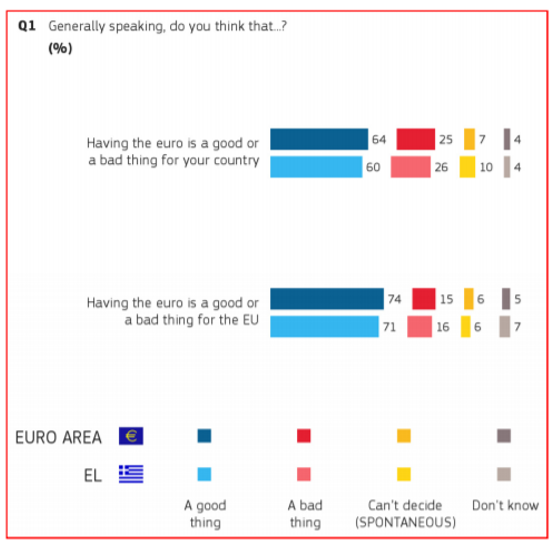 However, these shifts in sentiment come with several large and important caveats. It would be wrong to think that either the majority or a large chunk of the Greek public has suddenly subscribed to the Chicago School of economics and reads The Wealth of Nations before going to sleep and dreaming of the great prosperity free market policies can bring. As mentioned earlier, what we are witnessing now is a tolerance, rather than passionate support, for a business-friendly approach. A small part of the population (enough to swing an election) has decided to abide in the hope this method will deliver economic results but also facilitate the structural changes Greece needs by introducing not just reforms, but also higher standards and accountability.

If the New Democracy government fails on either of these counts, cracks in this fragile pact will start to appear. On the economic front, Mitsotakis has set some ambitious targets that will require a substantial increase in investment and time. His government has set out on the path to this goal by reducing taxes and attempting to deregulate in order to make Greece a more attractive place to invest. The results of this approach will be seen in the months and years ahead.

On the structural side, the signals emanating from the government have been mixed. The introduction of a larger number of experts, or technocrats, in the cabinet was overshadowed by the lack of women. Changes to the functioning of the executive arm of the state were blighted by the direct appointment of general secretaries, prompting complaints about a lack of transparency. A much-publicised attempt to re-implement the ban on smoking in public spaces was weakened by an apparent display of guilt by the health minister, who suggested the police could keep a cut of part of the fines and the state could subsidise outdoor heaters for cafes and bars. The effort to establish order on university campuses has also run into complications amid complaints of heavy-handed behaviour by the police.

Perhaps, though, the two most blatant examples of the government failing so far to live up to the expectations of voters who were hoping ND would usher in new standards in public life are the controversy over hospital director appointments and the academic qualifications of a deputy minister.

Towards the end of last month, an 80-year-old who had just been appointed as a hospital director in central Greece resigned from his post after an outcry about his unsuitability for the job. On live television, the pensioner revealed that he was awarded the post after making a commitment to then opposition leader Kyriakos Mitsotakis that he would stand as a parliamentary candidate with New Democracy (after previously representing ultra-nationalist LAOS) and bring his “army” of supporters with him in exchange for a position in the public sector when the conservatives came to power.

The 80-year-old had been accused of vying for a job as a hospital director when he was expelled from the then junior coalition partner Independent Greeks (ANEL) a few years earlier. His public admission that he was willing to exchange votes in return for a managerial position in the health service should have led to an inquiry or immediate resignations, regardless of whether the government believes it took him up on his offer or not. Instead, the issue was buried as soon as the aspirational retiree stepped away from his dream job.

The practice of handing out senior jobs at public hospitals, and other positions in the public service, as favours to faithful supporters is not new. In fact, SYRIZA was accused of doing the same thing, as were most of the governments that preceded it. It is one of the reasons that, according to the latest Eurobarometer, Greeks have the lowest level of satisfaction in the EU when it comes to the provision of public services. 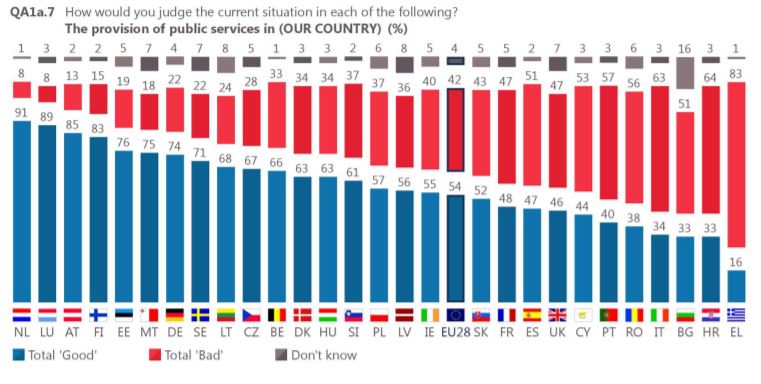 But, just as it could not be an excuse for SYRIZA, so it is that New Democracy cannot wash away its sins by arguing that its predecessors were just as bad, or worse.

In the wake of the scandal, footage emerged of a TV interview with Mitsotakis while he was the opposition leader in which he claimed ND would not appoint unqualified friends of the party to such positions, referring to hospital directors as a specific example. These were the kind of pledges that helped get him and his party elected. For voters who bought into this message, the contrast between expectations and reality could not be starker.

Similarly, it emerged this week that Deputy Minister of Foreign Affairs Antonis Diamataris, who oversees issues relating to diaspora Greeks, had falsely claimed in his official bio and in a newspepar interview that he obtained a postgraduate degree from Columbia University. After it was revealed that he only enrolled on the course, Diamataris put the discrepancy down to a mistake in the wording of what was written on the Foreign Ministry’s website, where it was claimed that he obtained an MBA from Columbia. The claim does not stand up to even the slightest bit of scrutiny but the government immediately sought to put the issue to bed.

It has been pointed out that politicians and public officials in other countries have been forced to resign after they falsely claimed to have degrees, obtained qualifications via dubious methods or inflated their CVs. By sweeping the issue under the carpet, ND sends the message that it has no intention of trying to live up to such standards, even though this is one of the key reasons the centre-right party finds itself in power today.

The fact that these grave errors of judgement have come so early in its tenure, along with the free pass the government is receiving from much of the media, mean there has been relatively little fuss. However, confidence in ND, and Mitsotakis personally, to deliver on promises about addressing the chronic weaknesses that have hobbled Greece is being chipped away. If the government does not adjust its course, the appetite voters displayed in the summer will ebb away and the momentum to deliver meaningful change will vanish. The worst mistake ND could make at the moment is mistaking conditional tolerance for a free rein.