You are at: Home / Agora / It's not the distance; it's the load you carry

Finance Minister Yannis Stournaras often says that Greece has covered 80 percent of the fiscal ground needed, while Bank of Greece governor Giorgos Provopoulos said recently in a parliamentary hearing that Greece only has the last, difficult mile left before it reaches the finishing line.

As much as hope is important, there is a high degree of risk that comes with the possibility that reality will defy optimism and hopes will be dashed, particularly for a nation that feels let down by decision makers over the last decades.

It is beyond any doubt that what Greece has achieved fiscally over the last few years is phenomenal. A primary deficit that at the end of 2009 stood at 24.2 billion euros has been wiped out within just four years and has been turned into a small primary surplus, irrespective of any objections one might have about its size and how it was achieved.

The table below from the European Commission provides a breakdown of the effort from 2010 onwards. 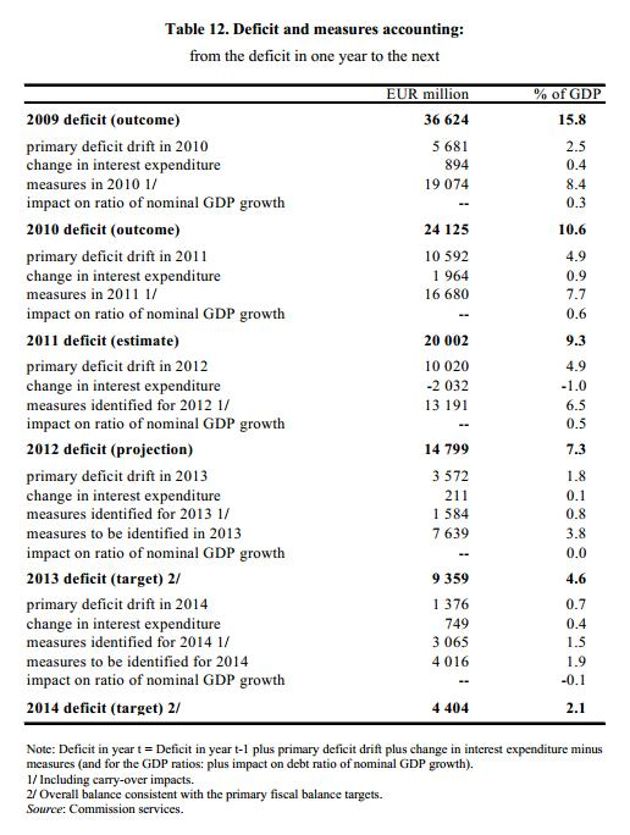 Between 2010 and 2013, Greece had to identify and implement 58.2 billion euros worth of gross revenue and spending cut measures, which corresponds to just over 27 percent of GDP. This impressive figure is indicative of the burden that has been carried by the Greeks and adds much to the debate of the programme design and why fiscal multipliers did matter: A reduction of the primary deficit equivalent to 10.5 percent of GDP in 2009 required almost three times the fiscal effort to balance the budget.

However, is the finishing line really in sight, with just the last mile left to go?

The Greek program on the fiscal side is designed to bring the primary balance to 4.5 percent of GDP by 2016 and remain at this level in the following years so Greece is in a position to cover debt servicing and maturities as well as loans to the International Monetary Fund. Looking at it from that angle (and if the starting point was a primary deficit of just over 10 percent in 2009), Greece is not looking at the last mile but at putting in half as much of the effort that it has done so until now. 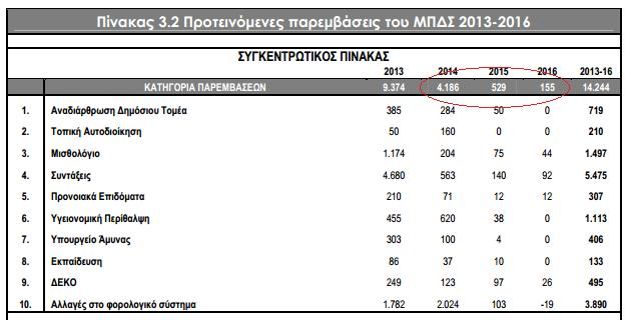 To get to that point, the Finance Ministry in the end of 2012 revealed in the Medium Term Fiscal Strategy that additional fiscal measures worth 9.5 billion euros will be needed. Around 4.2 billion were included in the 2014 budget and a further 529 million and 155 million were identified for 2015 and 2016 respectively (table above).

As seen in the table below, these measures are not enough to achieve the 4.5 percent primary surplus target. Measures amounting roughly to 1.9 billion euros in 2015 and 2.8 billion for 2016 are still required.

The Finance Ministry advocates that the unspecified savings for 2015 and 2016 will come from structural measures and that the government will be assisted in its task by the economy having picked up by then.

Recent developments regarding the latest troika review dampen Stournaras’s hope of relying just on structural measures to get to the finishing line. Discussions to close the 2014 fiscal gap have been ongoing since September and the troika keeps questioning proposals that are of a structural nature. This concerns a year for which the fiscal interventions were supposed to be sealed, yet the fiscal gap is still seen at 1.2 billion at least.

In an unexpected development, a court ruling could lead to the Greek government being required to find up to 500 million euros of permanent measures to reverse wage reductions in the armed forces and emergency services.

This takes us back to the uncomfortable discussion that no one wants to have about Greece's debt. The current schedule requires a country that has cut through the fat, the meat and has reached the bone to continue applying pressure in order to reach that magic figure of 4.5 percent of GDP primary surplus, which would allow everyone involved to continue pretending that the public debt, which stood at 171.8 percent of GDP in Q3 of 2013, is sustainable.

Achieving this target would translate into a surplus of close to 9 billion euros that would go annually towards debt servicing. Given the sacrifices to date and the remaining effort needed to attain this target, there have to be serious questions about whether it is politically viable and, most importantly, socially acceptable for this huge surplus to be used solely to pay off debt.

Simply looking at the challenging fiscal path ahead with blind optimism is likely to prove detrimental as it prevents a crucial debate about the country’s future prospects. Having achieved so much fiscally, the talk can no longer be just about the distance that lies ahead but the sack of bricks that Greece carries on its back.