You are at: Home / Agora / A sudden turnaround that could lead to sharp shock

During the same week in January that Wuhan went into complete lockdown, Fitch upgraded Greece’s credit rating to just two notches away from investment grade. The following week, Greece issued its first 15-year bond, attracting strong interest and a very attractive yield. This triggered an unmatched cycle of events for the country’s sovereign debt.

Just six weeks ago, the yield of the 10-year benchmark bond was trading at 0.92 pct and Greece was hailed as one of the most attractive trades in Europe. The domestic media went as far as suggesting that growth could surpass the government estimates of 2.8 percent growth for this year.

It seemed like Greece was on a carefree ride to a prosperous 2020 but, suddenly, someone pulled the handbrake.

The first confirmed Covid-19 case in Greece was on February 26 and in just five weeks since then the entire economy, minus essential functions and products, has come to a stop. On March 22, the government announced a complete lockdown that limits everyone’s movements to the bare minimum.

The Finance Ministry has announced measures to support the economy up to the end of April. They could potentially reach 90 pct of companies that have been affected by enforced closures or have seen their business collapse.

The European Union decided to activate the escape clause that frees member states from fiscal restrictions and the European Central Bank announced emergency asset purchases that even include Greece, despite the fact its debt is below investment grade. There are discussions about using the European Stability Mechanism to provide liquidity guarantees with its 410 billion euros of unused capacity and there is even talk of it being used to back a Eurobond to tackle the crisis, although its chances after last week European Council fallout seem limited.

These are extraordinary times.

Greece experienced its own unprecedented economic collapse between 2010-2012, when - as part of the conditions of the first adjustment programme granted by the eurozone and the IMF - it embarked on a brutal fiscal consolidation effort to close a fiscal deficit of 36 billion euros, or 15 pct of GDP.

How the economy reacted to that shock could provide an indication of the damage the virus might inflict a decade later.

The composition of Greek GDP altered during the crisis, with investment halving, primarily as a result of the collapse in the property market. Exports now have a more prominent role buy private consumption remains a key component in the region of 68 to 70 pct. Government spending is between 20 and 22 pct. Investments have dropped to 12 pct of GDP. The trade deficit has almost been eliminated at 0.5 pct of GDP, with exports growing to 35 pct and imports at 35.6 pct of GDP.

The Covid-19 crisis first hit the Greek economy through external demand. This was initially evident in services, as tourism came to a standstill and shipping routes dried up as global trade seized up, led by China, which closed down many of its factories. The pain will also be evident in the exports of goods as Greece’s largest trading partner, the European Union, is suffering. Italy has consistently been the largest importer of Greek goods.

Looking at the 2019 balance of payments data from Bank of Greece, travel and sea transport take the lion’s share of services receipts, representing more than 83 pct of total receipts in Q2 and close to 88 pct in Q3. Travel peaks in Q3 due to the high seasonality, representing 65 pct of services receipts, while shipping is more consistent in the region of 3.4 to 3.9 billion per quarter.

This leaves Greece hugely exposed to the external demand for services. During the global financial crisis in 2009, Greek sea transport receipts dropped by more than 30 pct year-on-year. With China now having a substantially larger role in global GDP and trade than in 2009, and given the sudden stop in trade routes since February, the drop of sea transport receipts this year could be larger. The shipping industry risks losing close to 4 billion euros in revenues.

The big blow will come in the tourism sector. There was a gradual shutdown of the industry in March as cancelations mounted, city hotels and seasonal resorts were forced to close and travel came to a halt as countries shut their borders and flights were grounded. Even under the most optimistic assumptions, the second quarter is a complete write-off, with the make or break challenge coming in Q3.

Last July, travel receipts came to 3.7 billion euros, August receipts represented the peak at 4.1 billion and September wrapped up the quarter with 2.9 billion. Tourism industry insiders are admitting that even if the situation is under control by June, some time will be needed for air connections to be re-established and it will take even longer for people to gather confidence to resume travel for recreation given the despair that has spread across the continent and the globe.

Last year, Greece received most of its visitors from Germany, followed by the UK, France and the US. Receipts from Germany were close to 3 billion, the UK 2.6 billion, France 1.1 billion and the US 1.2 billion. These are all countries that to various degrees have been impacted by the virus spreading. If travellers stay at home this summer, the total revenues at risk are 17 billion euros.

To complete the picture of external demand, from the same balance of payments data, excluding oil and ships, Greece trades more than 5 billion euros each quarter in goods, most of it going to EU. The second largest export is oil, at close to 2.5 billion euros.

During the global crisis of 2009, Greek exports of goods dropped by 15 pct, while oil exports settled at just 2.8 billion euros, down by 17 pct. A similar reaction this year puts at risk around 5 billion euros in revenues from goods exports.

The transmission channels quickly moved to domestic demand as the government had to force businesses to shut down before announcing a lockdown on March 22. It is useful to see how domestic demand components responded in the depths of the debt crisis as a gauge for the present conditions. The calculations are based on nominal GDP figures as they are true euro amounts. 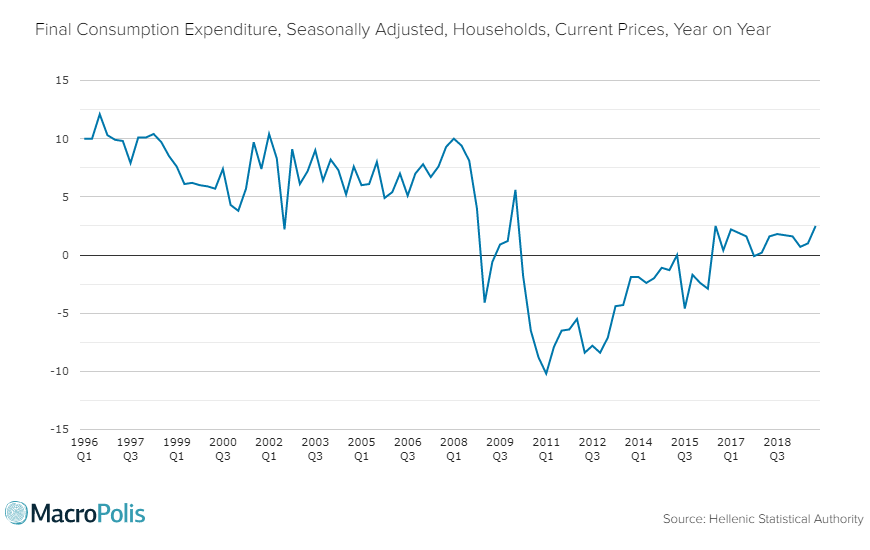 However, this is nothing like the standstill being experienced by Greece now, with the Finance Ministry estimating 900,000 businesses, or 90 pct of the active total, being under some sort of support, encompassing a total of 2 million salaried staff and self-employed. In Q4 last year, Greece had 3.9 million people in employment.

Households consumption has been hovering around 32 billion euros per quarter over the last year, averaging around 10 billion euros per month. So far, only supermarkets have seen a surge in sales and even there things have calmed down after shoppers stocked up in the early stages of the crisis. With Greeks stuck at home, more than half of those employed are counting on a government benefit or shift work with reduced hours if they are still working. A double-digit drop of household spending is a near certainty, and the likelihood being that it will far exceed the 10 pct drop of 2011. The combined household spending exposure between March and September is 74 billion euros. Even a conservative 10 pct assumption puts at risk more than 7 billion euros of GDP.

The experience of 2010 and 2011 makes the outlook in investment spending even grimmer. Although in 2011 most of the precipitous drop in fixed capital formation in Greece came from the collapse of the property market and construction, businesses spent 25 pct less on equipment and transport equipment. 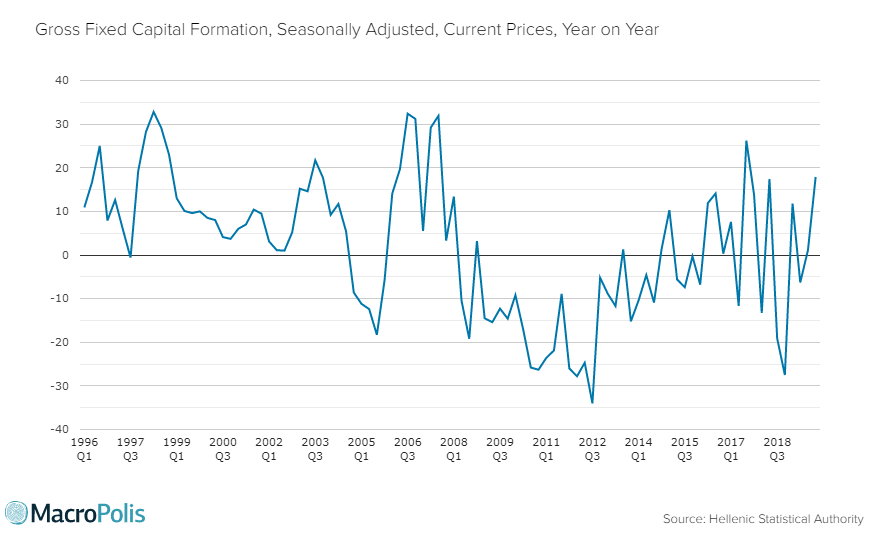 In terms of GDP estimates, some of this collapse of economic activity is expected to be offset by higher government spending in support of the economy and a sharp drop in imports as global trade froze and firms stopped ordering intermediate goods for production.

The Finance Ministry plans to commit up to 2 pct of GDP in the form of direct support, which is more than 3.5 billion euros to cushion some of the blow.

In the early stages of the debt crisis, imports dropped by nearly a third. The decline then stayed just below 10 pct. As demand gradually recovered in recent years, imports of goods and services per quarter have exceeded 17.5 billion euros. A sharp drop in Q2 and a more modest fall in Q3 could see imports drop by 8 billion euros.

When all this is added together, it is evident that the developments in the third quarter will be key in deciding the fate of the Greek economy this year. In the region of 20 billion euros of economic activity could be lost if the collapse extends to two quarters in the critical middle of the year.

If we consider that Greece entered this year following a shrinkage in the last quarter of 2019, the first quarter will be below par due to the impact of events in March, and assuming that the final quarter - in the best case – will be one of recovery after the massive, virus-inspired shock, the Greek economy could be heading for a very deep contraction similar to the one seen in 2011, when it dropped by 9 pct.