You are at: Home / Agora / Has external competitiveness been fixed in Greece?

Has external competitiveness been fixed in Greece?

This fourth blog in our series about the state of the Greek economy for Macropolis aims to improve our understanding of competitiveness, its drivers and the way it is measured. Greece continues to be in a process of economic adjustment, made even more pronounced during the Covid-19 pandemic.

The 2000s had been a decade of declining interest rates in Greece, consumer demand driven by borrowing and moderately lower unemployment. Increased wage growth led to higher inflation than in other euro partner countries, and steadily expanding public debt. These halcyon days ended with the crash in 2009-2010. GDP growth turned sharply negative, public debt and unemployment rose to very high levels, while wage growth and inflation gradually turned negative. The high domestic demand during Greece’s first decade in the euro area also led to larger external current account deficits and external debt, consistent with higher domestic wages and a loss of price competitiveness.

The adjustment process was initiated in 2010 and lasted for the entire second decade of Greece’s membership in the euro zone. But the adjustment is not complete. The Greek economy may continue to feel restrained until external and internal competitiveness have improved further. The economic consequences of the Covid-19 pandemic further underline this interplay.

Greece has made large efforts to reform the economy. The fiscal deficits have been reined in to control debt dynamics. Labor market reforms have begun to improve income formation. Across sectors of the Greek economy wages and auxiliary benefits have been reduced in difficult rounds of cuts. In fact, the turnaround has been so big that costs have been reduced and inflation has turned negative.

Greece continues to seek ways to bolster overall efficiency and productivity. Questions abound among policy makers and citizens: when will this structural adjustment process be complete? When will restructuring be enough? When will workers feel more confident that wage costs, relative to productivity growth, are under control, so that labor income is more secure? Indeed, when will the country witness that unemployment returns to much lower levels? When will competitiveness be restored?

It is important to try and measure how much progress has been made in restructuring the Greek economy. One approach is to compare how inflation in Greece has evolved relative to its trading partners. We can do this for two big groups: the rest of the world as one group (which includes the euro zone), and the euro area as a specific sub-group. Greece trades a lot inside the euro zone, and it constitutes the natural political partnership for Greece, so doing well within the euro zone is an important indicator of significant progress. 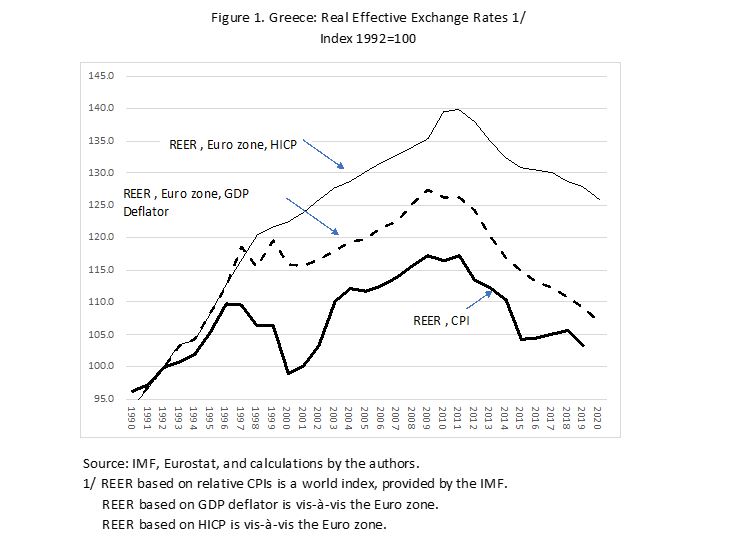 Figure 1 above shows some summary measures of Greek external price competitiveness, called the “real effective exchange rate.” It is called “real” because it compares inflation across countries. What matters here is how inflation in Greece evolves relative to other countries. It is called “effective” because not every country is equally important in trade volumes for Greece. The euro zone carries much weight, but, say, Bangladesh is much less important for Hellas.

Thus, the relative inflation performance between trading partners is weighted by the importance of exports and imports in the overall trading relationship. It is called an “exchange rate” because other countries may use a different currency than Greece. This is not an issue within the euro zone, but domestic prices have to be adjusted for variation, say, in the US dollar, or the British pound, if we are to measure correctly the impact of relative inflation in a country’s overall trading relations.

Using careful measurement of prices and inflation, trade weights, and exchange rates, statisticians and economists can calculate an index that provides an indication whether a country is becoming “more” or “less” expensive relative to a trading partner. That index is called the real effective exchange rate (REER). When the REER goes up, it means that domestic prices are rising faster than abroad and the country subsequently is losing price competitiveness. A REER that goes down indicates progress in restoring price competitiveness.

What do we see for Greece in these calculations from figure 1 above? The lower bold line of figure 1 is the IMF’s REER for Greece based on trade with all countries in the world and comparing consumer prices. We see that in the 1990s, Greece lost competitiveness as prices in Greece went up faster than among its global trading partners. Following various devaluations of the drachma before entering the euro zone competitiveness was partially restored. But when Greece was in the euro zone, devaluation of its new currency was no longer available. Competitiveness deteriorated again through a peak in the REER in 2010. The REER declined again after the onset of the crisis, and price competitiveness, as measured by the IMF, has improved considerably since. Despite this improvement it is not quite back to the level of 1992.

Why 1992? We will explain shortly. Let us first look for the same concept of the REER in figure 1, but now exclusively vis-à-vis Greece and its 18 euro zone partners. We show two price indices to calculate two REERs, one based on harmonized consumer prices (HICP, upper trend line in figure 1) and one based on inflation as indicated by the implicit GDP deflator (middle trend line).

Once again, we see that competitiveness at first deteriorated considerably, as already noted before. But since late 2010, Greece’s REER started to decline, implying that the economy was regaining price competitiveness within the euro zone. In both measures Greece’s competitiveness indicator is almost (HICP) or already back (GDP deflator) to its level of 1999-2000 when the euro was created. That by itself is a major achievement given how challenging the first decade of the euro was for Greek competitiveness.

Looking at this outcome one might ask why is the Greek REER for the euro zone higher than that for the world as a whole? This has to do with the very tough competition for Greece from euro zone partners that have very low inflation (e.g., Germany, Netherlands, etc.). Indeed, the euro zone as a whole has lower inflation than the rest of the world, so Greece is competing within a low inflation environment. We all know how difficult it is to adjust when inflation is low. One route is to cut nominal wages and prices, a policy option that is politically difficult and contentious within society.

But the bottom line of this development in Greece is unambiguous: the country is making good progress. This achievement has been hard-won. It was initially contested by many and remains fragile, not least as regards the economic consequences of the Covid-19 pandemic. The question that follows is thus: Has Greece finished the task or is there further work to undertake? This brings us back to the open issue of the year 1992.

When we want to know if a country is truly competitive and performs at a high level we need to know whether the economy can maintain equilibrium, both internally and externally. For domestic equilibrium, this means that unemployment should be low, inflation under control, productivity will be high, labor and capital re-allocation occur smoothly and efficiently without major strains. Such a favorable state also implies that the economy responds quickly to fiscal and monetary stimulus (e.g., like a peppy engine). If – by contrast – it takes a huge deficit (and debt) or very low interest rates to get GDP growth going (again), then one conclusion can be that the economy is too rigid, not very efficient and lacking in flexibility. That would cause the risk of overheating and a subsequent loss of competitiveness, i.e., the story prior to 2010 in Greece.

On the external front, a good equilibrium means a combination of factors: moderate alternating current account deficits and surpluses, a sound stock of international reserves or liquidity to pay all external balance of payments bills on time, including foreign debt service, a growing international investment position (accumulation of net assets abroad through FDI), and moderate external debt. If an economy is not competitive, it will accumulate external imbalances and have difficulty increasing export capacity. An efficient, well calibrated economy keeps people employed at home, and does not hemorrhage from external imbalances.

We have chosen two indicators, well aware that there is a whole dashboard of numbers that one needs to look at to get more granular information on the economy. But these two indicators already tell a compelling story about Greece.

Seen from this vantage point in 1992, the REERs are improving, but they have not fully recovered from the evolution into much higher levels through 2010. Thus, there remains work to do. If we more or less mechanically extend the REERs through the end of the 2020s and want the competitiveness positions to be more fully restored, than Greece needs to run CPI inflation of around 1 percentage point a year below the euro average. That is no small task remaining in a post Covid-19 environment.

Table 1 gives us another indicator that more work remains. Namely, the external imbalance has been fairly well restored—the current account deficit is down to a moderate number. But look at what cost this achievement came to domestic equilibrium, namely unemployment reaching 17 percent. This means that domestic demand had to be restrained to squeeze out the very large current account deficit. But this demand restraint cost jobs, and a lot of them.

How do you resolve this without blowing up the external deficit again? Further work is needed to lubricate the domestic economy, especially the supply and production side of the economy to boost the productivity of firms and employees, thus allowing more employment and higher wages without creating again an external disequilibrium. In our view, the 2020s remain a decade of structural adjustment and recalibration of the Greek economy. The availability of the EU’s Recovery and Resilience Facility (RFF) can provide a major stimulus for Greece to continue implementing this adjustment process. The projects identified and the transparent execution of financing instruments in the RFF have the potential to contribute to further productivity improvements and employment growth without repeating the disequilibria prior to 2010.

[1] Greece has “structurally” high unemployment, even in good times. So this is something the country should discuss and see what can be done about it. But in the early 1990s, this problem was relatively subdued. See our blog 3 for Macropolis, March 2021.