You are at: Home / Agora / Where is Odysseus? Part 2 - Uncertainty

Where is Odysseus? Part 2 - Uncertainty

We follow up on Blog 16 of April 2022 and continue to be in search of Odysseus, who is aiming to guide the people of Greece back home from a high debt ratio in the economy to a much lower debt ratio. The Odysseus metaphor was developed in the book “The Macroeconomy of Greece” published in 2019 with data through mid-2018.[1]

The book presents a long-run baseline scenario for Greece to help make the economy sustainable for next generations. The Covid shock and Ukraine War were unforeseen in 2018, so we need to ask what has happened to the economy in the meantime, and whether Odysseus is still on track to achieve his journey towards a sustainable and robust economy with much lower debt pressures.

In Part 1 (Blog 16) of our follow up, we recalculated the baseline demographic outlook for Greece, and how many people may be expected to be in the “working-age population,” (WAP). The WAP is important because the size of real GDP is anchored in how many people can work in the economy. Labor (L) is provided by the working-age population. We noted that the WAP in the book for the plan by Odysseus was defined as all people in the age cohorts from 16-64.

As a first innovation, we extended the working age from 64 to 74. Extending the working-age is based on the fact that people live longer, with many in good health, and the elderly might like to keep working in older ages. Indeed, the legal retirement age was increased twice in Greece.[2] This increases the potential pool of labor in the economy and, if participation in labor markets is high, this can lift real GDP and ease the debt burden.

From defining and calculating the working-age population, the next logical step would be to assess participation in the economic process by the working-age population, and then derive a potential path for the labor force, unemployment and employment. And, that is what we foreshadowed at the end of Blog 16 that we would present in our current Blog 17. However, we ask the readers for some patience, because upon reflection, we need to respond to a very good comment by one of the readers, to the effect of:

“how can we, or Odysseus in his long voyage, deal with the aspect of uncertainty around the baseline path? After all, the future is uncertain and we need some confidence interval to see if any deviation from the baseline is big (requires a policy response) or small (can be ignored).”

So, instead of diving straight into future participation, the labor force, and unemployment and employment, we want to reflect on this perceptive comment now, and put some margins around our updated baseline demographic projections. This will provide more nuance to the scenario analysis going forward, and allows us with more consideration to see where Odysseus’ plan is relative to this forward looking uncertainty interval.

Consider Figure 1 below, which shows not a single updated demographic projection that we label with the vintage of “2022” (baseline), but three variants, instead. The solid middle black line called 2022 is the baseline already referred to, the dotted line 2018 is the baseline scenario envisaged when Odysseus made his initial plan in 2018. And, now, we add around the new baseline a “low” and a “high” scenario calculated by Eurostat. As we get further into the future, the uncertainty around the baseline increases, because the cone from low to high population projections becomes wider. The further we peer into the future, the more uncertainty we have. 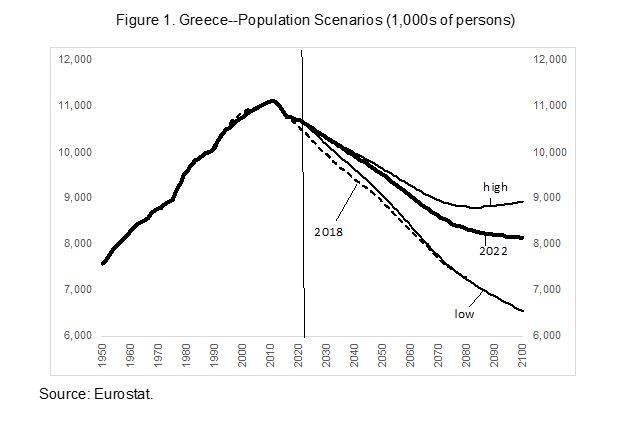 The “low” scenario is a statistical calculation (a sensitivity analysis), of what could happen to the Greek population if the fertility rate, instead of slightly improving as assumed in the baseline, were to stay low or even drop further from already below the replacement. Eurostat shows us that the impact of fertility rate on long-run population projections is big. We will touch below on the global discussion on fertility and demographic transition that is underway.

The “high” scenario is also a statistical calculation (another sensitivity analysis), of what could happen to the Greek population if the country were to accept more immigration than is assumed in the baseline calculation. Recently, Greece has had net emigration, so if an effort were made, and if this could be successful, to turn this around into net immigration, then the population could grow more quickly in the future.

Variations in fertility and net migration turn out to be the most sensitive variables for the future population projections. This is the reason why we have accepted these two alternative scenarios to mark the low and high possible future population of Greece.

The reader can see in Figure 1 why this uncertainty interval is interesting. There are several aspects to note:

Now, we can go a step further (beyond Eurostat) and, as observers, express our assessment whether the risks around the baseline are evenly balanced. Eurostat, as a statistical agency cannot do this. It’s job, with input from ELSTAT and other Greek agencies, is do the numbers work and present sensitivity calculations. Eurostat is not the correct institution to provide an assessment of risk. The assessment of risk is subjective, and that should be done by the political system, the Central Bank of Greece, the Ministry of Finance, etc. and by analysist who are users of the data.

In our assessment, Greece is not and is unlikely to be in the future a net immigration country. Immigration is difficult for Greece unless these are repatriating Greeks (return migration). Greece will have immigration, of course, but we do not see this as a big driver of future population growth. Hence, we would downplay somewhat the “high” scenario above.

The First Demographic Transition predicted that fertility rates after a while would gravitate back to replacement rate and thus generate a stable population, without a need for immigration, within a certain interval.[3] The baseline scenarios of most demographers still maintain some recovery of fertility rates, even though the evidence is, so far, to the contrary.

The Second Demographic Transition is a theory developed on the back of remarkable changes for society and the role of women since the 1960s.[4] With new technologies to control conception, women gained better control over their own aspirations, such as participating in higher education and in the economy. Women’s liberation also inspired new social and political conditions. The gradual erosion of religion as the organizing principle of family lives and politics further interacted to change how demographics developed in societies.

The Second Demographic Transition predicts that fertility will remain below replacement rate, as aspirations evolve toward personal development and away from meeting social expectations of multiplication and/or replacement. Thus, the nuclear family is no longer the core of social and political conditions. Many women, and men, have switched toward intense investment in fewer children, or even only one child. Women now often have one child without being married. Divorced adults often do not remarry or live in partnership. Childbirth is postponed to older ages (and thus lowers total fertility).

Also, social, political, and economic stress and inequality lower fertility. Who wants to place children in a world crackling with ecological destruction, vast consumption of nonrenewable resources, and where political systems are entirely unconvincing in addressing broad existential questions such as sustainability and political peace (the Ukraine war is just the latest installment of our incapacity to come to sensible sustainable solutions).

In other words, the drop in fertility may have many causes that come together to keep reproduction well below replacement. In our assessment, and considering all issues, the risks to the baseline population scenario for Greece, as elsewhere, are weighted to the downside.[5]

The Second Demographic Transition cannot be easily waved away as an erroneous theory, because the facts and its inherent logic are supported by empirical observation. This is a difficult message, because if populations are declining, economies will not grow very fast or at all, and managing societies that do not generate new resources to distribute by the political system is very challenging—to the point of showing the fragility of democracy itself. A new literature is emerging that is considering these challenges, called the literature on “degrowth.”[6] 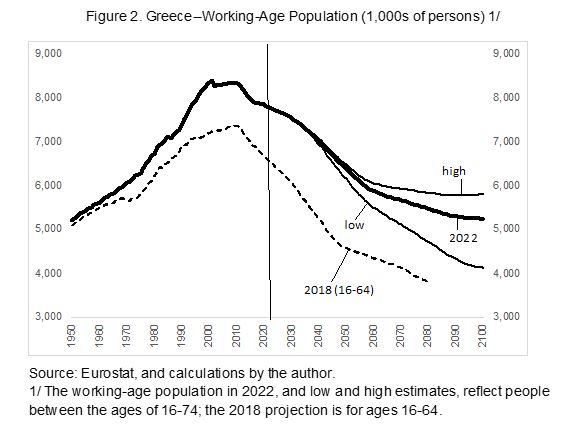 For the purpose of this blog and ascertaining where Greece is in its efforts to establish a sustainable economy with less debt, we can summarize that the new demographic updates are more favorable than the path assumed in Odysseus’ plan of 2018. That is supportive of the Greek economy. We have now placed a confidence band around the new baseline scenario, and the upshot remains the same, subject to the advice not to rework plans wholesale in view of this revision. The reason is that the confidence band around the new baseline still includes some possibility that the 2018 path becomes reality, if fertility remains weak.

The path for the lower fertility scenario shows the same dynamics as the path from 2018, but the volume of potential workers is higher, because  we are now including two more 5-year cohorts (from 64 to 74 years of age). If participation of these elderly workers, and women, rises in the future, then Greece could benefit from a larger labor force, and that would offer perspective for a larger real GDP than we anticipated in 2018.[7]

After this sidestep into “uncertainty” around the baseline scenario, and the interesting research that is going on in demographic transition and fertility (with important social, economic, and political implications), we may now proceed in the next blogs to tease out how big the labor force of Greece may become, relative to the assumed path in Odysseus’ plan of 2018, including the implications for employment and the production of real GDP in the future.

[3] See, for instance, “Demographic Transition and its Consequences”, in Population and Development Review, edited by Ronald D. Lee and David S. Reher, (https://www.popcouncil.org/uploads/pdfs/2011_PDRSupp_DemTranConseq.pdf).

[5] For a book that envisages the possibility of a sharp decline in the global population see: “Empty Planet: The Shock of Global Population Decline” by Darrell Bricker and John Ibbitson, (https://www.penguinrandomhouse.com/books/545397/empty-planet-by-darrell-bricker-and-john-ibbitson/)

[6] To gain a sense of how multifaceted the degrowth discussion is, Wikipedia provides a useful introduction, see https://en.wikipedia.org/wiki/Degrowth.

[7] Alas, there is one more catch. Greece is trying to boost (elderly and) female participation, as do other countries. But if female participation rises, then fertility rates tend to fall even further. It goes to show that many economic and social variables are interconnected. Good policy making is indeed complicated.