You are at: Home / Agora / SYRIZA and ANEL: Far from picture-perfect

The picture from the first meeting between Alexis Tsipras and Panos Kammenos in January 2015, after SYRIZA’s election victory was a sign of things to come. The pair’s idiosyncratic alliance is coming to an end now, having lasted longer than many observers expected, but its deep flaws were visible from the start.

Stunning as the result of the January 25 elections was four years ago, when his left-wing party surged from the fringes to gain 36.3 percent of the vote – more than Greece’s traditional ruling parties, New Democracy and PASOK, combined - Tsipras was still in need of a coalition partner to govern. He rejected the option of teaming up with centrist To Potami because it was regarded as being too close to the political establishment dominated by PASOK and New Democracy, which SYRIZA deplored.

Instead, Tsipras opted to join forces with Kammenos. His nascent Independent Greeks (ANEL) party was seen as a better option because it would be more likely to support Tsipras as he attempted go toe-to-toe with Greece’s lenders over austerity policies and debt relief. To Potami was a supposed soft touch, while Kammenos had made a career of behaving like a bulldozer, even before leaving New Democracy to found nationalist, anti-bailout ANEL. If this meant turning a blind eye and deaf ear to some of the extreme views and unsavoury behaviour of ANEL and its leader, this was a risk worth taking Tsipras believed.

The deal was done very quickly. It had probably been wrapped up weeks in advance, not unlike Sunday’s announcement that the alliance between the two parties had come to an end. There was no detailed discussion regarding policies or time-consuming attempts to thrash out a common programme. Tsipras appeared with a small notepad, while Kammenos, if memory serves, carried a manila folder (which did not appear in the shot) that seemed designed to give the impression of thoroughness than serving any practical purpose. In between them, there was a small cup of coffee.

That’s all that was needed for the two men to shake hands and form a government that would leave Greece severely damaged economically and drained emotionally over the ensuing months. Their coalition’s first six months, when misguided negotiations with the troika/institutions, cost the country billions while delivering little in return is a stigma that both men will find hard to shake off. Tsipras has put his errors down to being under misguided illusions and choosing the wrong people to work with. The latter appears a reference to former finance minister Yanis Varoufakis and perhaps radical left figures such as Zoe Konstantopoulou and Panagiotis Lafazanis, who all quit the SYRIZA-ANEL coalition in the summer of 2015. Perhaps, Kammenos will be added to the list in the future.

The coalition re-convened in September 2015 after being given a second chance by a bamboozled electorate that was called back to the voting booths before the ink on the third EU-IMF bailout had dried. Having promised the exact opposite i.e. to “tear up” Greece’s memorandum (MoU) with its international lenders, Tsipras and Kammenos then went about implementing the new, third, programme agreed in July 2015 with more dedication than one could have imagined just months earlier.

In the end, this is what salvaged their reputation in some quarters. The European creditors were appeased by the government’s ability to pass measures, such as a new and substantial reform of the pension system, that its predecessors would have been unable to. The execution of the programme, not without its delays and confrontations, also helped create a more stable environment, which gave the economy a chance to recover.

Although public finances are in a better state, growth has returned and the employment situation has improved, the normalcy that Tsipras and Kammenos promised is still some way off. Also, their narrative about the “clean exit” from the third programme in August was riddled with holes, especially as access to the bond markets remains tenuous. Nevertheless, they survived longer than their predecessors and feel that they have earned the right to claim they took Greece out of the bailout and steered the economy towards recovery.

While the true nature of Greece’s bailout exit and the actual state of the economy can be debated at length, what is undeniable is the price paid to reach where we are now. Forget the economic impact of the first half of 2015, it is another type of cost that will be the biggest blemish on the SYRIZA-ANEL legacy.

Tsipras came to power riding a wave of rage against the political failings that had led to Greece’s crisis, as well as the policies adopted to get the country out of its dire economic state. Much of the message was a typical populist barrage against the elites, but there were also pledges regarding greater fairness, tackling corruption and bringing new values to Greek politics.

Civil liberties are the only area where SYRIZA has really delivered on its promises. The citizenship law (granting citizenship rights to the children of migrants) and allowing same-sex civil unions are two such examples. In these cases, Tsipras stayed true to his principles, ignoring the political cost and focussing purely on delivering progressive change.

It is no coincidence that during these few bright spots, Kammenos and his party did not provide support, which came instead from some opposition MPs, who also deserve credit for theri stance. The defence minister has consistently represented the worst aspects of the SYRIZA-ANEL partnership: reactionary, populist, divisive, exploitative and abusive.

These characteristics were often evident in the way that the coalition dealt with Greece’s institutions, its opponents and the parliamentary process over the last four years. It is no surprise that the 2018 Democracy Index published by the Economist Intelligence Unit this week showed that Greece continues to lag many of its European partners, with a score of 7.29, which ranks it 39th in the world and still in the “flawed democracy” category. 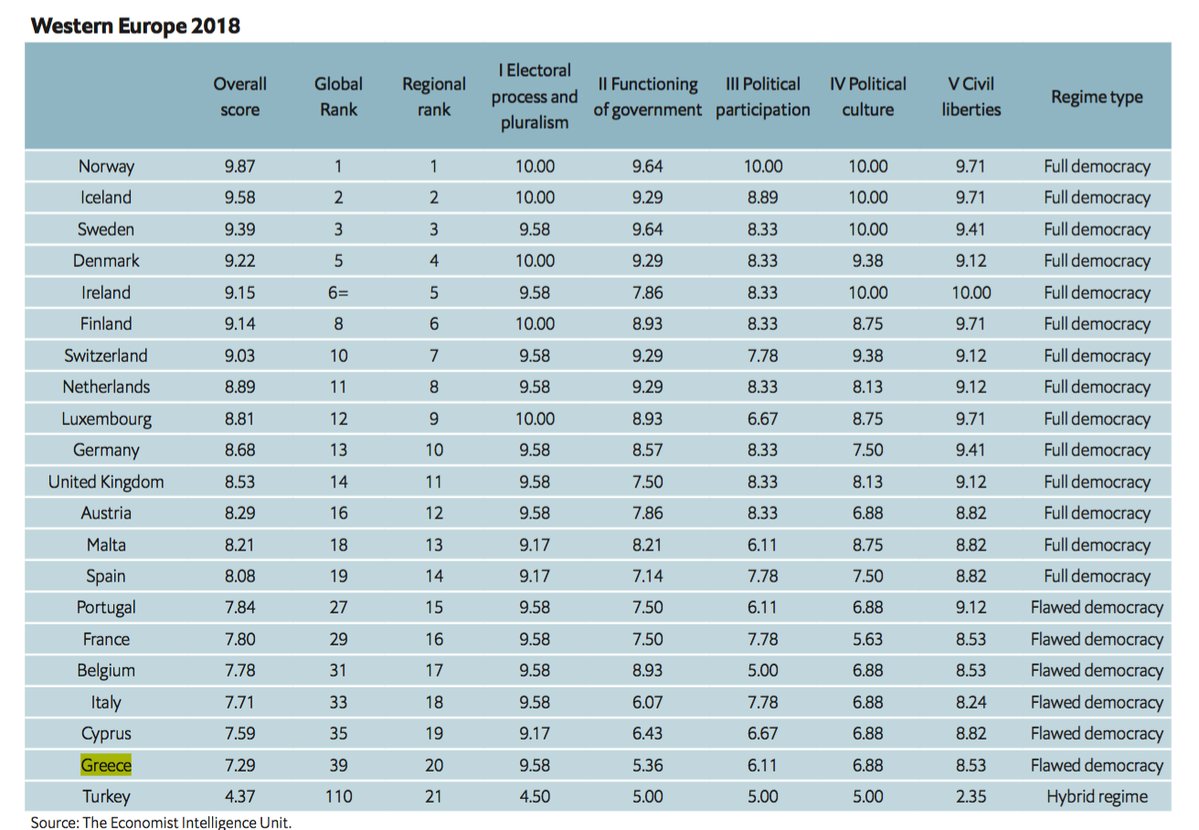 The country’s lowest scores come in three categories where the coalition has failed spectacularly since 2015: functioning of government, political participation and political culture. The SYRIZA-ANEL administration failed to strengthen or fully respect some of Greece’s key institutions (especially the judiciary in cases such as the Novartis scandal and the TV permits auction and independent watchdogs, with the Independent Authority for Public Revenue being a notable exception), was unable to introduce a new morality in day-to-day politics (such as ending the practice of using the public administration for political ends) and did not engage in a more respectful style of political debate, carrying on instead the tradition of fuelling polarisation. 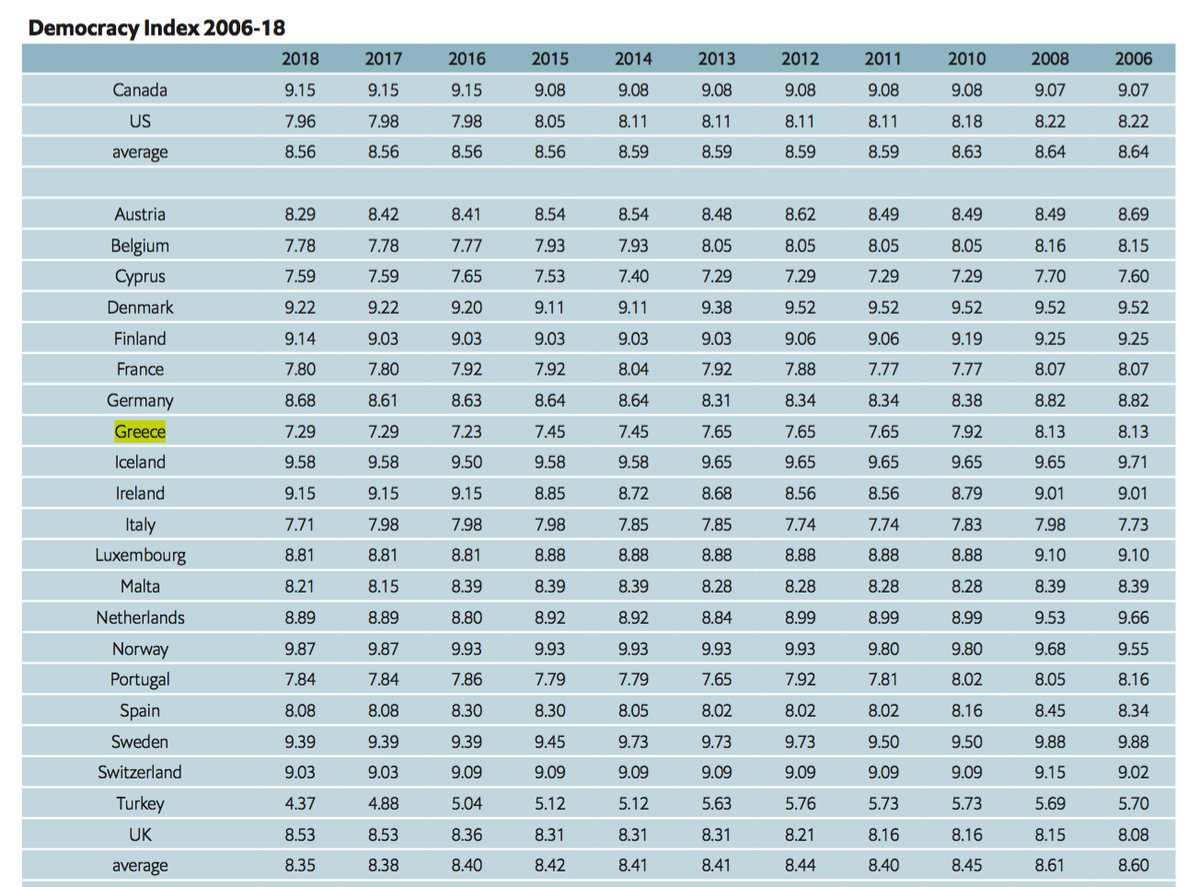 It is not that Greek politics was idyllic before SYRIZA and ANEL arrived on the scene. This is a tale that the government’s opponents tell to make themselves feel better and to wash away their guilt as they try to sweettalk voters into trusting them again. If Greece was an unblemished democracy, its institutions functioned well and corruption in public life was limited, the country would not have ended up in such a mess in 2009. Also, the start of the crisis dealt a deeper blow to fairness in Greek society, eroded trust in the political system and convinced hundreds of thousands of Greeks to leave their country. The EIU index shows that the quality of Greece’s democracy has been on the slide since 2010.

It is the SYRIZA-ANEL government’s failure to demonstrably improve on any of this (it could be argued that the coalition has even exacerbated some of the problems) that will prove the most damning indictment of the last four years. Despite their claims to the contrary, and their relentless haranguing of most of those who preceded them, Tsipras and Kammenos showed that they were no different.

The inability to distinguish itself from its predecessors, who it accused of disrespecting institutions, being tolerant of or complicit corruption and engaging in toxic political debate, will be indelible blots on this administration’s copy book. Most of those who expected SYRIZA and Tsipras to provide a breath of fresh air saw their hopes wilt in the ill wind that blew into town on January 2015.

They should have known what to expect when they saw Tsipras and Kammenos sit around a table on the morning after the elections. If they studied the picture close enough, it would have told them all they needed to know: The SYRIZA-ANEL alliance would be driven by opportunism and undermined by a lack of substance. The way it started did not just determine the way it ended, but characterised much of what went on in between.