You are at: Home / Agora / Where is Odysseus? Part 6 - Potential real GDP

As in our previous five monthly blogs, we continue to trace the progress of modern-day Odysseus, who started a long voyage in 2018 to help bring Greece back home to a sustainable and prosperous economy. He is seeking to navigate the winds of a high debt ratio of 185 percent of GDP towards a debt ratio of 60 percent of GDP. The plan that Odysseus had developed in 2018 is described in a book on the macroeconomy of Greece.[1]

In blog 16, we updated Greece’s demographic projections and found that the future population is expected to be slightly bigger than suggested in the data from 2018. Consequently, in blog 17, the working-age population, on baseline, was also projected to be larger than initially thought in 2018. In blog 18, we found a slightly larger labor force than was assumed in 2018. In blog 19, we showed that Greece may expect somewhat higher employment levels, in persons, than was anticipated in Odysseus’ original navigation plan of 2018. These updates favor a somewhat longer and bigger recovery of Greece. In blog 20, however, we documented a glitch, because productivity per employed person in Greece is hardly growing—well below the speed that was anticipated in Odysseus’ outlook of 2018. This is growth negative.

In this blog we will examine the implications of more favorable demographics, combined with relatively weak productivity developments, for the long-run real GDP and real GDP growth outlook. We find that the results fall short of what was anticipated in Odysseus’ 2018 Plan, principally because of the slower productivity performance. Greece tends to expand employment faster in government than in the private sector, which lowers productivity growth. Also, structural reforms are still not fully hitting their target, reflecting old-standing political resistance (clientelism), and preventing the needed regime shift from past performance to a sustainably higher productivity economy.

We will compare the potential growth outlook that logically results from the sequential data analysis in our blogs, with that of the EU Commission, and as adopted by the Greek government.[2] Our more-modest real GDP outlook for the long run is quite below that of the EU Commission and Greek government. This is important, because economic policy needs to be consistent with potential output, as we will elaborate below.

The long-run Real GDP outlook. In blog 19, we presented an updated long-run baseline outlook for employment, in persons, together with a high and a low scenario to account for uncertainty. Then, in blog 20, we updated the long-run baseline outlook for average productivity per employed person, also with a high and low scenario alongside the baseline calculation. We can put together the number of persons expected to be employed, together with the average expected productivity per employed person, to build a baseline scenario for long-run real GDP. We can do the same for the high and low scenarios of real GDP around this “most likely” baseline. These calculations are reflected in Figure 1 below. 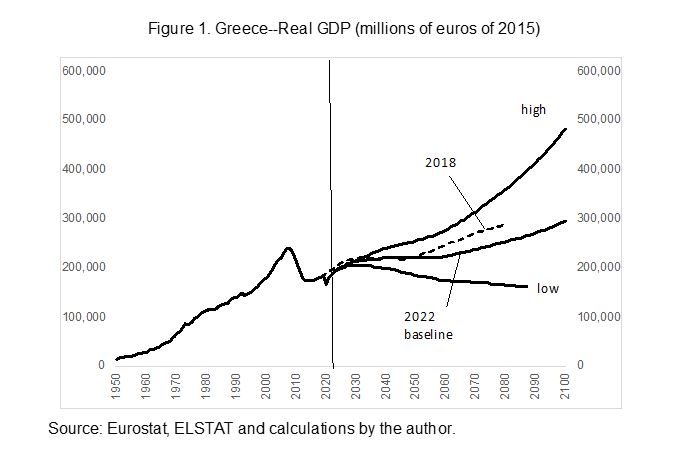 The vertical line marks the current year 2022. The dashed line shows the path anticipated in Odysseus’ plan of 2018, reflecting a declining population over time, combined with a recovery of labor productivity growth to 1.5 percent a year (the calculations were done through 2080 at that time). The updated baseline real GDP scenario is the solid line in the middle, showing the dip from the Covid episode in 2020-2021, the subsequent anticipated recovery, and then the growth after the 2050s to around 300 billion euros in 2100, when the (slowing) aging effects on GDP from retiring and passing baby-boomers in the Greek population has declined. This baseline assumes that Greece still sees a recovery in labor productivity to 1 percent a year (not yet reached in 2022 as we speak), as compared to 1.5 percent a year in the 2018 Plan.

If we put an uncertainty interval around this baseline (something that had not been computed for the 2018 Plan), we find that in case that the population numbers trend toward their lower Eurostat scenario, and that average productivity growth will recover to only 0.5 percent a year, then real GDP could gradually decline from the 2030s onward and stabilize around 160 billion euros by 2100. Instead, if we mark the higher population interval in the Eurostat demographic outlook for Greece, and assume that Greece will still lift average labor productivity growth to 1.5 percent a year (but with a delay), then real GDP could grow to 484 billion euros by 2100.

This new baseline scenario for potential real GDP growth of 0.6 percent a year in the 2022 calculations[3], compares with a potential real GDP growth baseline of 0.7 percent a year in the 2018 Plan (through 2080, with productivity growth at 1.5 percent a year, and a demographic (employment) decline of -0.8 percent a year). As noted, the demographic outlook has improved since 2018, but productivity has disappointed. The difference between the new potential growth estimate and that in 2018 may seem small to many readers, but this difference keeps compounding over a period of 80 years, and Greece starts 2022 at a lower base, because the Covid recession was not foreseen in the 2018 numbers.

The Commission notes explicitly in its Aging Report that the productivity assumptions for all member states are based on a convergence principle. That is to say, the Commission assumes that all countries that lagged behind in the past with productivity performance, will catch up to the better performing countries in the future. The whole constellation of policy assistance, and funding in the EU is based on the political desire to see lagging EU member states achieve this convergence in productivity, which also implies a convergence in per-capita income growth.

This convergence principle is a political objective, an aspirational assumption; it is not an economic certainty, and may not even be welfare optimal, given that countries in different regions of Europe have legitimate differences in their labor-leisure tradeoff preferences. It is important to realize that the productivity assumptions in the EU Aging Report are thus a politically desirable outcome—they are not an economic baseline scenario.

We strongly recommend that Greece plan its fiscal policies on baseline scenarios, not on EU political aspirational assumptions. If we look at past EU long run projections, a pattern becomes obvious. Over time, they are sequentially adjusted downward because they underestimate negative shocks, and they suffer from optimism bias (which is rather common in economic forecasting). In our view, the convergence assumptions even bias the outlook for the EU as a whole and would best be abandoned for true baseline scenarios.

Why, you might ask, are countries like Greece nevertheless so keen to adopt the rosy assumptions from the EU Commission, even in the face of sequential disappointments? This problem has strong political roots. The EU is an economic project but also an important political mission. The EU Commission is under political pressure to deliver a “good” outcome. This “good” outcome must show good economic results. Thus, when in doubt, the forecast will be nudged up, not down, because political systems are not very good at explaining to their voters that growth might be moderate or even disappointing. The time horizon for politicians is also very short, so it is important to push growth in the short run, even if that requires more debt (which will mature well after the current generation of policy makers has left office).

The Greek government is no exception to the pressures of “talking things up,” no matter what party is in office. If the EU Commission presents a rather favorable outlook, then the Greek administration has no political incentive in the short run to present an independent path that is more cautious. Moreover, financing plans, including with money from EU institutions (e.g. Next Generation EU) or ECB facilities, are made as benchmarked against future growth outlooks, so higher future growth scenarios, sanctioned by the EU Commission and member states, justify more generous borrowing and spending plans. The debt will then be placed, even though the growth may never come. If this leads to a debt problem, then Greece can turn around and tell EU partner countries that it has done what the EU Commission has recommended. As a result, since the EU partner countries have all approved the spending and debt plans, it is then also reasonable to ask that partner countries help to overcome a debt crisis, when it occurs.

Table 1 shows the difference in productivity scenarios in the EU Commission Aging Report/Greek government 2022 Stability Programme and in our blogs. The productivity growth rates in the official documents are much higher than in our blogs. The reason is that by 2070 Greek productivity must have converged to the level of productivity assumed for all EU member countries (the aspirational assumption). Since Greece starts with productivity levels well below the better performing countries this implies that the growth rates for future productivity improvements must be pushed up mathematically, even to over 2 percent a year around the 2040s, in order to converge productivity levels by the 2070s. In our view, these assumptions are too optimistic for a sound baseline, and create an optimism bias in the official long-run calculations. This is dangerous for Greece. 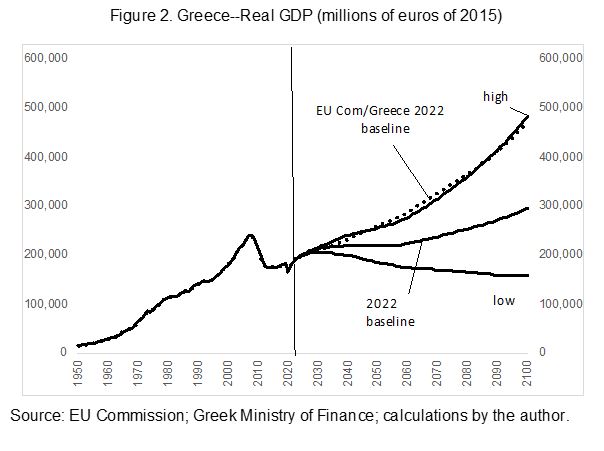 The younger generations are always at the biggest risk of optimistic assumptions and (politically) inflated expectations. They, in Greece and the EU overall, will have to deal with the possible/likely growth disappointments and the higher debt ratios. It is not possible to hold current political generations accountable for future debt crisis.

From a risk perspective for Greece, and even for the EU as a whole, it is better to graft economic and fiscal policies on more moderate assumptions (keep a margin of safety). We can then truly celebrate if the surprises, ex-post, turn out to be on the upside. This is much easier on the population than trying to manage yet another debt crisis if our assumptions once again have proven to be too optimistic.

[2] The Greek 2022 Stability Programme (April 2022; approved by the EU Commission, https://ec.europa.eu/info/sites/default/files/2022_el_stability_programme_en.pdf), lays out the government’s long-run view on growth and fiscal sustainability. In this report, the Greek authorities copy the long-run macroeconomic assumptions and results from the 2021 EU Commission Aging Report. But, these assumptions and results do not present a baseline. Rather they present an aspirational long-run path for potential real GDP, driven by a productivity convergence assumption to other (high) performing countries by 2070, as explained below.

[3] Potential growth rates of 0.6 percent a year does not mean that Greece could not have a growth rate of 3 or 4, or even 5 percent, but these high growth rates are not average, and they will likely only occur after a temporary recession (as with Covid). It is the long-run (structural) trend average that counts for potential growth over time.